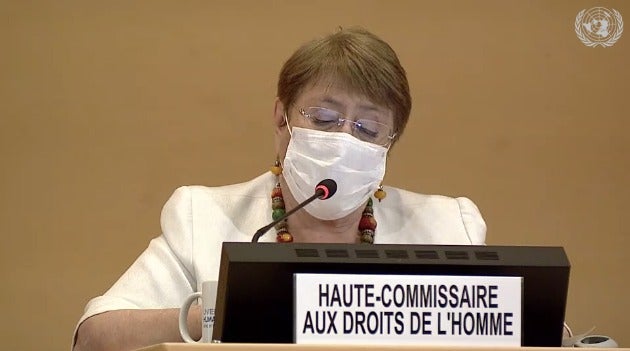 UN High Commissioner for Human Rights Michelle Bachelet presents report on the human rights situation in the Philippines during the 44th regular session of the UN Human Rights Council in Geneva, Switzerland on Tuesday, June 30, 2020. Screengrab from UN Web TV

MANILA, Philippines — UN High Commissioner for Human Rights Michelle Bachelet has called on President Rodrigo Duterte to “refrain” from signing the controversial anti-terrorism bill, saying that its passage intensifies concerns on the “blurring of important distinctions between criticism, criminality, and terrorism.”

Bachelet made the appeal on Tuesday as she presented during the 44th regular session of the UN Human Rights Council the report her office prepared about the killings and alleged human rights violations in the Philippines.

According to Bachelet, the proposed law could have a “chilling effect on human rights.”

“So I would urge the President to refrain from signing the law and to initiate the broad-based consultation process to draft legislation that can effectively prevent and counter violent extremism, but which contains some safeguards to prevent this misuse against people engaged in peaceful criticism and advocacy,” the UN human rights chief said.

“And of course my office is ready to assist in such a review,” she added.

The anti-terror bill seeks to amend and repeal the Human Security Act of 2007 (HSA) and punish those who will propose, incite, conspire, participate in the planning, training, preparation, and facilitation of a terrorist act; including those who will provide material support to terrorists, and recruit members in a terrorist organization.

But the bill, which is now only awaiting Duterte’s signature, has been met with widespread opposition from various groups, which raised fears that the measure could spur human rights violations and suppress dissent.