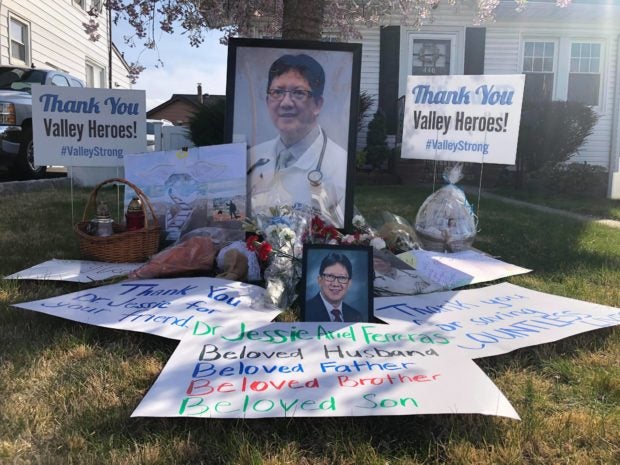 MANILA, Philippines — Even with a successful career as a doctor in the United States, Jessie Ariel Ferreras never forgot his Philippine roots.

Whenever he could, he made sure to be present in high school reunions in Laguna province and get-togethers with members of his class at the University of Santo Tomas (UST), where he had gone to medical school.

At Christmas every year, he would initiate gift-givings to the needy in his hometown, Lumban, in Laguna province, where he had grown up as the eldest in a brood of six.

At 62, he would have wanted to retire in the Philippines.

But in April, he died of COVID-19 at his home in Bergen County, New Jersey.

Proud to be a Filipino

“My dad was always very proud of where he came from … He was so proud to be a Filipino,” his eldest son Nico said in an interview. “And I think he came to the United States where the training was excellent, but he also wanted to really be able to provide his family a good life.”

Ferreras is among the 160 Filipino health workers honored and remembered in the digital memorial “Kanlungan,” set up to ensure that the contributions of medical professionals in the diaspora who are of Philippine ancestry are not forgotten by the global health-care community.

But more than remembering the fallen for their work, the tribute gallery (kanlungan.net) also serves as a repository of memory for families who have been left behind, including those thousands of kilometers back home in their native Philippines.

The story of Filipino laborers have always been characterized by movement and migration. In 2019, about 2.2 million Filipinos were working abroad, sending remittances that would reach up to P211 billion in the April-September period of the same year.

With Filipino health workers becoming a sought-after group globally, the new coronavirus pandemic has further amplified that distinction for medical professionals from the Philippines. But this has also effectively sugarcoated the real and present threats of the virus to them and their loved ones, whether back home in the Philippines or with them in their host countries. 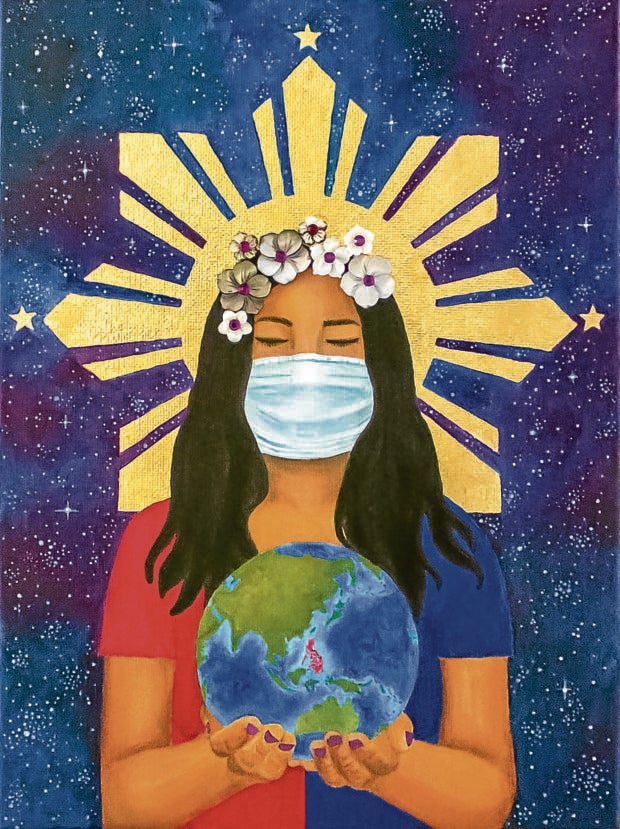 TRIBUTE Online visitors of www.kanlungan.net, the website honoring Filipino front-liners abroad, will be greeted by a painting of Iris Boncales-Strauss entitled “Kapwa.”Anative of Cebu who migrated to the United States when she was 12, Strauss says the painting is her way of honoring Filipino health workers. The website is a project of the feminist group AF3IRM, of which Strauss is a member. —PHOTO COURTESY OF THE ARTIST

“The Philippine narrative is always broken, fractured to so many disparate threads,” said Ninotchka Rosca, one of the founders of the transnational feminist group AF3IRM, which spearheaded the Kanlungan project.

“But we have to push for the human dimension of our labor. These are not just workers, exported labor [or] servants. These are people, these are human beings [and] they have connections,” Rosca said in an interview.

Ferreras’ story is one that exemplifies such connections, deeply entwined not just back home in the Philippines but also in New Jersey where he had lived for three decades and worked as a practitioner of family medicine.

“After my dad’s passing, what we really learned is how kind and how loved he was,” Nico, 30, said of his father, who was the first doctor in their family. “Not only by family and friends, but by his coworkers and people we did not know and his patients.”

Ferrera’s death was swift, and almost without pain, his son said. Even when he was already sick with COVID-19 himself, he was still calling up his patients, including those who had tested positive for the same virus that he was battling.

Since physical distancing measures had prohibited the usual mourning traditions, Ferreras’ colleagues from Valley Medical Group, as well as patients and friends, held a caravan of cars in front of his home on Easter Sunday to pay their last respects. They placed cards, candles, flowers and artworks on his front lawn.

Back in the Philippines, fellow UST graduates set up a Facebook page in his memory, peppered with photos with his family and friends and videos where he was seen dancing and waving to the camera in his travels.

“I think that my dad is the epitome of hard work. He did not come from privilege and he worked for everything he got,” Nico said.

Nico Ferreras, following in his father’s footsteps, is doing his residency in family medicine at a Pennsylvania hospital, hoping to carry on his dad’s legacy. Just like his personal hero, he chose to study medicine in UST, too.

When things settle down, Nico, his mother Madonna and brother Ryan plan to bring his father home.

“We’re going to bring back his ashes to the Philippines because that’s where he wanted to be,” Nico said. “For him, home has always been and will always be in the Philippines.”