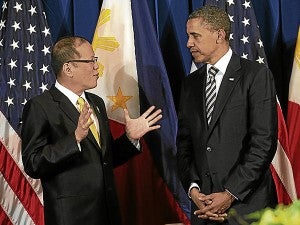 BALI HIGH. President Aquino meets with US President Barack Obama on the sidelines of the Asean Summit in Bali on Friday. The American president invited Mr. Aquino to the White House early next year. MALACAÑANG PHOTO BUREAU

BALI, Indonesia—President Benigno Aquino III has found an ally in US President Barack Obama in the Philippines’ initiative to resolve the row with China over the Spratly Islands in the West Philippine Sea (South China Sea), with the US leader saying they would “look out for each other.”

The two leaders squeezed in a 30-minute meeting before noon Friday at the Grand Hyatt Bali hotel on the sidelines of the Association of Southeast Asian Nations (Asean) annual summit, tackling maritime security, nuclear nonproliferation, disaster and humanitarian relief.

They later cohosted the Asean-US Leaders’ Summit at the Bali Nusa Dua Convention Center, venue of the Asean summit.

Facing Mr. Aquino at the hotel’s grand ballroom, Obama said the ties between the two countries went back decades and would grow even stronger in the coming years.

“We have a 60-year alliance that assures that we are looking out for each other when it comes to security. But more importantly, we have incredible person-to-person relations between our two countries,” Obama told Mr. Aquino before US and Philippine officials, including Secretary of State Hillary Clinton and Foreign Secretary Albert del Rosario.

The meeting, Obama said, was an “opportunity for us to discuss how we can further deepen that relationship” and tackle maritime security, among other topics, in today’s East Asia Summit. He also lauded Mr. Aquino for his leadership and reforms in government.

“I think that a relationship that’s already very strong can only become stronger as a consequence of our continued interaction,” Obama said.

Mr. Aquino said he looked forward to boosting the two countries’ ties in these troubled times.

“It’s true we have one of the longest-running relationships, a strong base of shared values and history. And we look forward, in these turbulent times, to really further strengthen our relationship,” he said.

Assistant Foreign Secretary Patricia Paez said that during the two leaders’ meeting, Obama “expressed appreciation for the Philippines’ emphasis on a peaceful settlement and a rules-based approach in resolving the competing claims in the West Philippine Sea, specifically the need to segregate the disputed features and the disputed waters of the South China Sea because not all of the entire South China Sea should be disputed.”

Free use of the seas

The Philippines and the US, as well as China, are taking part in today’s East Asia Summit of 18 Asia-Pacific nations, where maritime security is expected to be high on the agenda.

The Philippines is pushing to turn the disputed sea into a zone of peace, freedom, friendship and cooperation, which entails segregating disputed zones to allow free use and joint development of undisputed areas. This was  “noted” by other Asean countries.

Despite the cool response, Philippine officials saw a glimmer of hope, after some of its neighbors manifested the need to move forward with a Declaration of the Conduct of Parties on the South China Sea and draw up a “binding set of rules” on the West Philippine Sea.

China, the Philippines, Vietnam, Malaysia, Brunei and Taiwan have overlapping claims over the Spratlys, believed to be atop vast oil and gas reserves and straddling commercial lanes.

Paez said that while Obama made no commitment on the Manila proposal, Clinton clearly spelled out the US position  during her Manila visit early this week.

“She made clear the US position. The basic US position is for a multilateral and a peaceful resolution of the dispute. President Obama also noted the importance of the China-Asean Declaration of Conduct on the South China Sea as a framework for tackling this matter,” she said.

Obama also told Mr. Aquino the United States would enhance its military presence in the region by deploying more than 2,000 Marines in Australia,  Paez said.

“They also discussed the importance of maritime security, which is one of the three major items on the table of the East Asia Summit,” she told reporters.

Obama’s announcement of the deployment drew protests from China but was welcomed by Philippine officials, who viewed it as a “stabilizing force” against China’s rising power.

At the Asean-China Commemorative Summit on Friday morning, the Philippines, as well as Vietnam, Thailand, Cambodia and Malaysia, manifested the need to move forward on the 2002 Asean-China declaration of conduct, Communications Secretary Ricky Carandang said.

Carandang said even China agreed to discuss the code of conduct.

“Everyone said we should move forward on a code of conduct so that we can eventually find a binding code of conduct,” he said. “That (is) a positive development.”