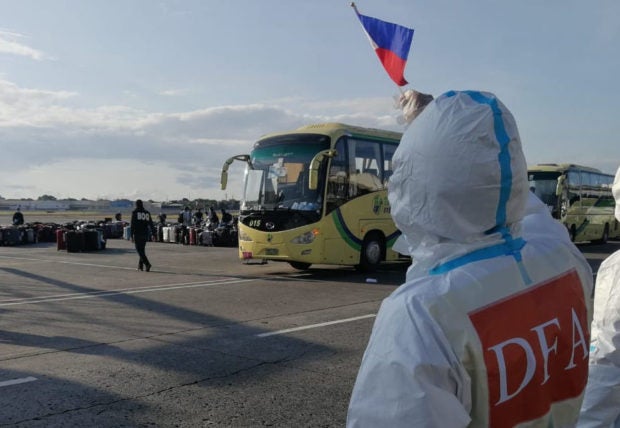 PUERTO PRINCESA CITY—A returning overseas Filipino worker who arrived in Puerto Princesa International Airport on Sunday, May 31, was confirmed to be COVID-19 positive, according to a belated statement from city health authorities.

Dr. Dean Palanca,  the incident commander of Puerto Princesa Task Force for COVID-19,  announced late Wednesday, June 3, that the patient initially tested positive during a rapid test upon arrival, and was swabbed for confirmatory test Tuesday.

The sample was processed in Ospital ng Palawan’s COVID-19 GenExpert laboratory. The result of the test, which turned out positive, was released by the City Health Office also late Wednesday.

The patient was part of a contingent of 23 overseas workers who arrived on May 31 via Airasia flight following an order from President Rodrigo Duterte to clear Manila of stranded overseas Filipino workers.

Their flight hopped off on three other routes, including Tagbilaran, Tacloban, and Bacolod before disembarking in Puerto Princesa International Airport at around 7:45 a.m. on Sunday.

All of them, including the patient who tested positive, are currently quarantined in a facility set up by the city government.

Prior to her most recent result, the Palawan returning Filipino was previously tested using a real-time polymerase chain reaction on May 2 and May 13 while she was under quarantine in Metro Manila.

Her previous result returned negative which subsequently resulted to the issuance of her travel authority, a requirement needed before she was allowed to return home in Palawan.

The development brought to three the official total number of COVID-19 positive cases in Palawan.