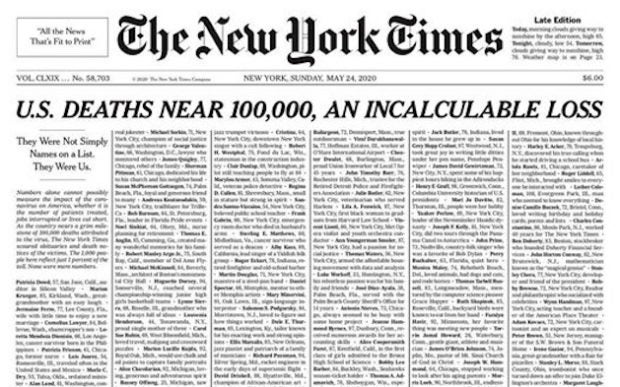 The front page of The New York Times on Sunday, May 24, 2020. (Photo from the paper’s Facebook page)

MANILA, Philippines — Two Filipino women — a cancer survivor and one who arranged feeding programs for poor children in the Philippines — were on the list of the New York Times’ historic front page memorial for nearly 100,000 fatalities of COVID-19 in the United States.

Both women were also the first confirmed COVID-19 fatalities where they lived in the US — Los Angeles County and New Port News in Virginia, according to multiple reports in the US.

Ahead on the New York Times list was Loretta Mendoza Dionisio, who was 68-years-old.

The NY Times quoted a phrase from Loretta’s obituary describing her as a “Cancer survivor born in the Philippines.”

An obituary for her on LA Times gave more details.

The LA Times said Loretta was “the kind of woman who would chase bullies through the streets of her Pasay City neighborhood with a wooden spoon when they made fun of her brother for being gay.”

Loretta, the LA Times obit said, was “the kind of woman, who upon immigrating to the United States to escape martial law in the 1970s, became a trailblazer in the advertising industry.”

Loretta, according to the LA Times, died on March 10 of COVID-19 just after flying into Los Angeles on March 8 from a trip to the Philippines.

According to LA Times, Loretta and her husband, Rodrigo, met at an art program in the University of Santo Tomas in Manila.

The couple settled in Orlando, Florida where, the LA Times report said, Rodrigo found work as in-store advertising director for a hardware firm where Loretta was creative director. The two, said the LA Times report, became co-owners with their son of an auto repair business.

The LA Times said Loretta was the only woman in her department when she started her career.

In a report from the news website ClickOrlando.Com, Loretta’s son, Rembert, was quoted as saying his mom was both a cancer survivor and diabetic.

According to the ClickOrlando.Com, Rembert got a text message from his dad after he and Loretta returned to Los Angeles on March 8.

“I get a text message from my father saying your mother didn’t have a pulse and I had to give her CPR,” ClickOrlando.Comquoted Rembert as saying, referring to cardio pulmonary resuscitation first aid procedure.

“He kind of told me I had to call an ambulance. Your mother went to the hospital,” ClickOrlando.Com quoted Rembert as saying. “They’re saying that she’s going to be okay and that was kind of it.”

“Wow, that’s it. I’m never going to see her again,” ClickOrlando.Com quoted Rembert saying at an interview with News 6, a TV station in Orlando.

Loretta, according to the ClickOrlando.Com report quoting Rembert, died just 36 hours after landing at Los Angeles International Airport and just eight hours after being rushed to hospital.

“We were expecting them to come back and we were going to have these great conversations and be able to laugh about certain things that they did on vacation, you know?” ClickOrlando quoted Rembert as saying.

“It’s just not something you expect to hear,” Rembert said, according to ClickOrlando.

Rodrigo, the ClickOrlando report said still quoting Rem, mourned for Loretta alone as he was on quarantine in Southern California after developing fever and showing other COVID-19 symptoms. Rodrigo eventually tested negative for SARS Cov2, the coronavirus that causes COVID-19.

But, according to the ClickOrlando report, Rembert had complained about testing procedures followed for his father.

“They wouldn’t do the testing unless he was in critical condition,” said Rembert, according to the ClickOrlando report. “It was mind-blowing. I’m like, wait, you’re asking us to take a chance and wait for him to get bad before he gets a test.”

An NY Times obituary for Loretta said she was known as Lettie to those close to her.

“She was outrageously friendly,” the NY Times obit said.

“This made her children cringe but was also something they loved,” said the NY Times report.

But Loretta, according to the NY Times report, was also tough. “At work, she could stare down colleagues who were hairy, blustery and taller than her by a foot or two,” the report said.

“And it was true of her husband, Roddy (Rodrigo). He could not say no to her,” the NY Times report said.

It said Rodrigo didn’t want to go last February to the Philippines. “He was watching the early news about the coronavirus and worried that it would put his wife, a cancer survivor, in danger,” the NY Times report said.

But Loretta, the NY Times report said, “was adamant.” “There was something she needed to finish,” the report said.

It said when Loretta’s death was announced in Los Angeles, she was not identified “in accordance with federal privacy regulations.”

Loretta, the NY Times report said, was referred to only as a woman in her 60s “with underlying conditions.”

“In the ongoing tally of fatalities associated with the coronavirus, hers was the 37th death in the United States, the first in Los Angeles County,” the NY Times report said.

Almost two weeks after Loretta’s death, the NY Times report said, her family “was still grappling with the bureaucracy that surrounds infectious diseases.”

“In the painful logistics of hygiene and quarantine, no funeral Mass has been said for her,” said the NY Times report.

The second Filipino on the NY Times memorial for COVID-19 fatalities was Maria Linda Villanueva Sun.

According to a Washington Post report, Maria was infected with coronavirus but thought at first that she just had the flu.

When Maria’s husband, Tonglin, was transferred to Fort Eustis, she had to transfer from San Francisco Bay to Newport News, Virginia, the Post report said.

They had bought a house in Newport News in October 2019 and were still moving their stuff from San Francisco Bay to their new place when Maria died of COVID-19 on March 25. She was 61.

On March 14, Maria and Tonglin were supposed to be visited by a daughter and son-in-law but Maria told them not to come as she and her husband were ill, the Post report said.

Maria was taken to Bon Secours Mary Immaculate Hospital for pneumonia on March 17, the Post report said. She tested positive for coronavirus soon after, the report added, becoming the first confirmed COVID-19 case in Newport News.

The Post report said Maria was able to get in touch with her son, Nemesio, and two daughters, Niki and Jasmine, through Facetime, an Apple application that lets users video call each other.

“But soon they got updates only from the hospital,” the Post report said.

A private funeral had been planned for Maria on April 8, the report said.

Tonglin, Maria’s husband, also tested positive for coronavirus and has been recovering at home, the Post report said.

According to the report, Maria had been sending her children Bible verses to help them get through college and law school and ping them about her favorite video game, “Plants vs Zombies.”

According to Washington Post, Maria was born in Rizal province in the Philippines to parents Ulrico Adriano and Lydia Bergano Villanueva, who both worked for Nestle. Ulrico was accountant while Lydia was human resources director.

Maria immigrated in 1979 and managed a Japanese tempura restaurant in the early 1980s.

From the United States, Maria arranged feeding programs for poor children in the Philippines, collecting donations from her relatives to finance feasts for the children at a church that was not named by the Post report.

According to an obituary for Maria on WYDaily, a news website in the Newport News area, Maria studied accounting at the University of the East in Manila and went to the US in 1979.

Loretta’s and Maria’s names were among 1,000 that New York Times culled from hundreds of obituaries on US newspapers and which NY Times put out on its front page in a bid to show that the nearly 100,000 COVID-19 deaths in the US were not just numbers.