A glimpse into the post-COVID-19 world, from the EU diplomat-in-chief | Global News
Close
menu
search

A glimpse into the post-COVID-19 world, from the EU diplomat-in-chief 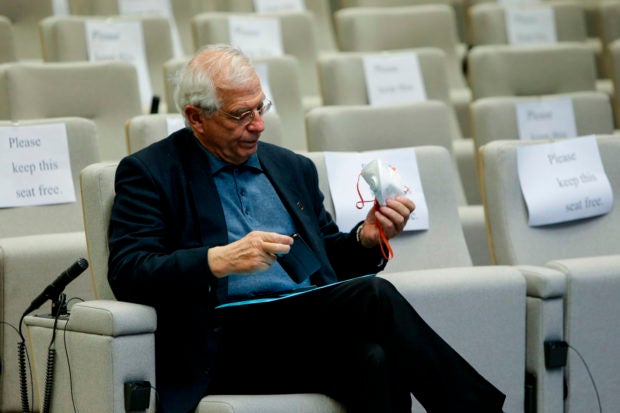 Mr Josep Borrell, the EU’s High Representative for Foreign Affairs and Security Policy, believes that while the Covid-19 crisis will not end globalisation, it will lead to the questioning of its assumptions. In particular, it highlights the need for shorter supply chains in critical areas and the relocation of some activities closer to home. AGENCE FRANCE-PRESSE via The Straits Times/Asia News Network

SINGAPORE — Former United States secretary of state Henry Kissinger once famously asked: “Who do I call if I want to call Europe?” Since December 2009, when the European Union appointed its first High Representative for Foreign Affairs and Security Policy – effectively the foreign minister for the 27-country grouping – there has been a telephone number that Dr Kissinger or his successors could call. Today, that number belongs to Mr Josep Borrell, who took up the position as the EU’s third diplomat-in-chief last December.

The 73-year-old former foreign minister of Spain has had something of a baptism of fire in his still relatively new role, having to deal with a health and economic emergency that burst upon the world without warning.

In an exclusive video interview with The Straits Times from his office in Brussels last week, Mr Borrell explained how the Covid-19 crisis upended his agenda and priorities.

Up to February, he had been busy traveling, dealing with geopolitical issues related to Libya, Syria and Ukraine. “Then suddenly, the pandemic came. Travel stopped. Teleconferencing started and now we are on the phone all day,” he said. “It is not the best way of doing diplomatic work, as it lacks the human touch.”

His agenda shifted. Some issues that he never imagined he would have to deal with suddenly became priorities, such as the repatriation of some 600,000 citizens from EU member states who were stranded around the world. “I had to talk to everyone to ask them to allow our planes to land. Singapore is a big hub and we also sought its support to keep its airspace open to allow people to come back to Europe.”

The countries of the EU were ravaged by Covid-19, as the epicenter of the pandemic quickly moved from China to Italy by March. But apart from fighting the pandemic at home, the EU also decided that it needed to act beyond its borders. “As long as the virus will not be eradicated everywhere,” Mr Borrell wrote in his blog, “it will remain a threat to all of us.”

So early last month, the EU launched an initiative called Team Europe, whereby it mobilized an emergency package of €20 billion (S$31 billion) from its member states and its financial institutions to deploy in the most vulnerable developing countries and conflict zones.

One of its top geographical priorities is Africa, which is close to Europe, devastated by conflict and a major source of immigration to the EU. The pandemic makes Africa vulnerable to both a health crisis and an economic calamity.

But Team Europe funds are also pouring into other vulnerable regions – Eastern Europe as well as the Western Balkans, Latin America and parts of Asia. Some €350 million is going to Asean, including €20 million towards supporting the World Health Organisation’s response to Covid-19 in eight Asean countries and €48.5 million in funding for joint research and innovation projects in Asean.

Mr Borrell believes that while the Covid-19 crisis will not end globalization, it will lead to the questioning of some of its assumptions. In particular, it highlights the need for shorter supply chains in critical areas and the relocation of some activities closer to home.

He recalled that the oil crisis of the early 1970s taught the EU that it needed to have strategic stocks of oil. “We learnt from that crisis that the flow can be cut at any time. Now we are learning that for other critical resources like medicines and chemicals, we also need to stockpile critical stocks, in case there is a cut in supply. Up until now, no one believed that paracetamol or antibiotics could be critical. We did not think that a humble mask, gloves, aprons or other personal protective equipment would be critical. This experience shows us that supply chains can be broken. We have learnt how vulnerable they are, how concentrated the supply capacity is, and how critical these products can be.”

But while some production of these items will move to Europe, mainly from China, this will not apply to other products. “Nobody is talking about relocating all kinds of activities,” said Mr Borrell. “Globalization will continue because it is of common interest. Europe would suffer the most if world trade is cut. Europe is a champion of free trade – trade is the source of our prosperity. But we have to protect ourselves when faced with the shortage of critical supplies. However, that doesn’t mean we are becoming protectionist.”

When it comes to investment, some EU countries are concerned that their companies, many of which have fallen sharply in value during the Covid-19 crisis, might be vulnerable to opportunistic takeovers. Some, such as Spain and Italy, have imposed limits on foreign equity participation.

For Mr Borrell, who has cautioned that “the EU must no longer be offered on a plate to the rest of the world”, the core issue is one of reciprocity, especially vis-a-vis China, with which he claims the EU has an “asymmetric relationship”.

“Everybody understands that there is no reciprocity on investment,” he said. “There are clear difficulties and constraints that European firms face.”

He pointed out that, for example, when it comes to participating in public tenders, European firms do not face the same conditions when they operate in China as Chinese firms face in the EU. “We must ensure that there is reciprocity and a level playing field,” he said, adding that it would require negotiating a new investment treaty with China.

A trade and investment agreement with Asean is “still very high” on the EU’s agenda, according to Mr Borrell. As with all such EU agreements, it will be ambitious, he said, covering not just trade in goods and investment, but also government procurement, competition rules and sustainable development – on all of which there is a continual dialogue. He believes that the EU’s existing agreements with Singapore and Vietnam as well as its future deals with Indonesia and Thailand will be “stepping stones to a regionwide agreement”.

Meanwhile, the Covid-19 crisis is accelerating the EU’s push to invest in new, labour-substituting technologies. Mr Borrell pointed out that the response by companies to the pandemic has already produced some successes.

For example, Mercedes has offered the German government its three-dimensional printing capabilities to produce medical equipment, in cooperation with Drager, a medical technology firm. The EU’s own Joint Research Centre is 3D-printing valves for ventilator masks which Italian firm Isinnova develops from snorkelling masks. More such innovations are in the works. A rise in automation across the EU is likely to be an inevitable consequence of the Covid-19 crisis.

After a prolonged period of strict measures to contain the pandemic, parts of Europe are now exiting from lockdown. Italy has opened up to tourism. Germany and France are gradually relaxing their rules, allowing more establishments to open. Spain has announced a four-stage exit strategy. Mr Borrell stressed that coordination will be critical when lockdown measures are lifted.

“We will face serious problems if each country takes it upon itself to lift restrictions,” he cautioned – which is also true for other regions of the world.

“For example, talking about tourism, you can open your border, but if your neighbor closes it, the flow of people won’t happen.”

The EU’s national borders, which were eliminated for travel purposes by the Schengen Agreement of 1985, have now come back because of the crisis. “Erasing the borders again has to be done in a coordinated way,” said Mr Borrell. “Otherwise, people will not be able to travel. And if they travel without clear guidelines, the illness will return and the efforts of containment can be lost.”

An alarm from nature

Looking ahead, Mr Borrell believes that the Covid-19 crisis is an opportunity to double down on dealing with environmental issues, with which it is connected. “The coronavirus is an alarm coming from nature,” he said.

“We can blame wet markets or we can blame a specific type of animal, but we have to judge the crisis as part of a broader problem that humankind is facing.”

He hopes that countries that are spending massively to spur economic recovery will spend in environmentally sustainable ways.

“It is clear that as we look to kick-start the European and global economy when the pandemic is controlled, we cannot go back to old, polluting habits. We must invest in renewable energy and sustainable development. Of course, the EU cannot do this on its own. We need all nations to work together, including our partners in Asean, with whom we are already cooperating on climate mitigation, green finance and a circular economy for plastic.”

The post-Covid-19 world will also be influenced by what Mr Borrell calls a “battle of narratives”.

It is a fight of soft power, he said – of competing visions, including a blame game between the United States and China on the origins of the pandemic, a propaganda battle and debates on what kinds of political system are better able to deal with it.

“This has become quite an angry dispute, using comics, video and the media, with each side trying to influence public opinion at home and around the world. There seems to be a view that this is a very important geopolitical fight, and that whoever wins will be important for the future balance of power.

“But I don’t think there will be a winner. Everybody will lose something. This is a pandemic that affects the world, and our attention should be on this. But if there is a fight, it’s better to fight with stories than with bullets.”