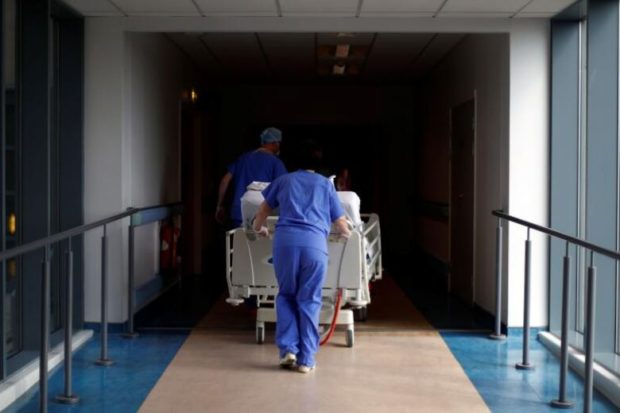 In many hospitals around the world, Filipino nurses are on the front lines, often also among the first to get infected. AFP via The Straits Times/Asia News Network

MANILA, Philippines — It had gotten so bad that at one point all she was dreaming about was blood.

“It was just blood everywhere,” Ms Romina, one of close to 20,000 registered Filipino nurses now living in the United Kingdom, told The Straits Times.

In March, when all of Britain was in the grip of a pandemic, over a dozen beds at her pediatrics unit were sequestered for patients with Covid-19. By then the disease had already killed more than 40,000 and infected close to a million as it raced from Wuhan, in China, where it was first detected, to every corner of the world.

Ms Romina, 50, who asked that she not be identified by her real name because her hospital had not authorized her to grant interviews to journalists, knew one of those nurses. That nurse was a few years older than she was, and was more an acquaintance than a close friend. Still, her death cut deep.

“It was 20 years ago. I remember her serving us food when we first reported for work at the hospital,” she said.

What really got to her, though, were her patients. Every one of them was at death’s door, and they were alone. Many died without ever touching or even seeing in person their spouses, children, or siblings.

It fell to strangers like Ms Romina to hold their hands as they took their final breaths.

Once, a 54-year-old woman was rolled into her ward.

“She was already very sick… She was insulin-dependent,” said Ms Romina.

The woman was a Filipino who had been a maid in London for over 20 years. She never married. Her only family was a niece she had helped send to school and who was then working in Bahrain.

Ms Romina recalled holding a phone to the woman’s face. On the other end was her niece.

“Her niece kept crying. She kept asking me to help her aunt. All I could tell her was, ‘We’re doing everything we can’ .But her aunt was too far gone… She died moments later,” she said.

“I thought I already had a heart of stone,” she said.

Most of her Covid-19 patients were on ventilators. They were inside rooms that were hot; the air-conditioning has to be turned down low and a fan cannot be used to reduce the risk of the air inside flowing to other rooms and contaminating them.

It’s not just the hot Covid-19 rooms. She also has to don a fitted mask, a hazmat suit, goggles, and head and feet covers. They wear these for three hours, three times a day. They get 45-minute breaks in between to eat and relieve themselves.

One time, Ms Romina said she was in protective gear for seven hours straight. 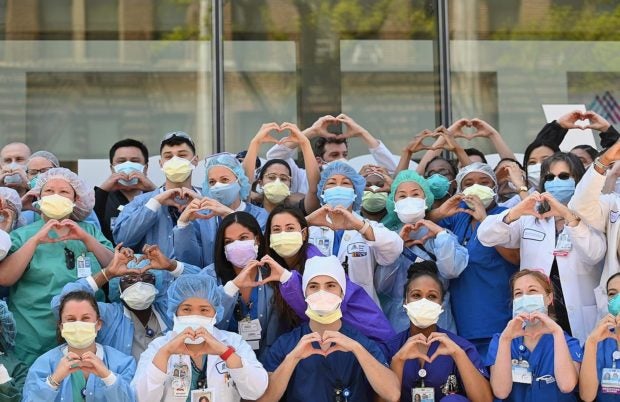 Nurses and healthcare workers gesturing love in celebration of Nurse Week and International Nurses Day outside Mt Sinai Queens in the Queens borough of New York City last Tuesday. ProPublica reported that at least 30 Filipino health workers had died in the New York-New Jersey region since the end of March. AFP via The Straits Times/Asia News Network

Still, she counts herself lucky. Her unit is well-provisioned for an outbreak.

Many of the nurses who fell ill were likely infected by patients in general wards who exhibited very mild symptoms or none at all. So, they did not have anything on but a mask.

Mr Donald Suelto, 51, was not wearing a mask or a plastic shield when a patient at the chemotherapy department at Hammersmith Hospital in west London, coughed on his face on March 25.

He was sent home three days later after that patient tested positive for the coronavirus. Four days into his isolation, he developed a fever and was coughing.

He called his mother and told her he probably had the virus, and that it “felt like being stabbed with a knife all over my body”.

He was told to call a Covid-19 hotline, but he complained to a friend on April 5 that he could not get through, and feared that he might not make it. That was the last time anyone heard from him.

On April 7, police found his body inside his flat. He had died alone.

This is the story of many other Filipino nurses not just in London, but all across the globe, in places where the virus has hit the hardest and killed the most.

ProPublica reported that at least 30 Filipino health workers had died in the New York-New Jersey region – the “epicenter of the epicenter”, said a community organizer – since the end of March.

One in four Filipinos in the New York-New Jersey region works in hospitals and other medical fields.

Over the past two weeks, two Filipino nurses in Dubai were reported to have died of the coronavirus.

In many other hospitals in Italy, Germany, Spain, Saudi Arabia, Japan and Singapore, Filipino nurses are on the front lines, often also among the first to get infected.

This is the price the Philippines is paying for a decades-old immigration policy that turned the nation into the world’s largest exporter of nurses.

The Americans built hundreds of nursing schools in the Philippines. The intention was to create a pool of Filipino auxiliary nurses to help the US deal with its own outbreaks of cholera and malaria.

That set off a wave of migration to the US. Nursing became a path to a better life for tens of thousands of poor and middle class Filipinos, an escape route from political instability and crushing poverty back home.

By 2017, immigrants from the Philippines accounted for 28 per cent of the 512,000 immigrants working as registered nurses in the US.

In time, Filipinos would also answer the call for nurses in Europe, the Middle East, Australia-New Zealand and elsewhere in Asia.

A nurse could earn about five times more than the top salary abroad, especially in the US and Saudi Arabia.

But many often end up working the least desirable jobs and shifts.

It was part of a historical pattern, Mr Kevin Nadal, a professor of psychology at John Jay College of Criminal Justice and The Graduate Center of the City University of New York, told ProPublica, of “immigrants doing a lot of the dirty work that people don’t want to do… being painted as heroes, when in reality they are only put in these positions because their lives are viewed as disposable”.

Maila counts herself lucky. She works at a hospital in Singapore.

“We were ready. We had enough PPEs. We were trained how to use PPEs. Even before Covid-19, we already had ourselves fitted for N95 masks,” she said.

Maila also requested that her real name be concealed because of her hospital’s policies regulating disclosure of information to the media.

In her hospital, patients with Covid-19 are admitted to a separate intensive care unit from non Covid-19 patients.

Maila has been assigned to the latter ICU, but it has an isolation unit that at times is used for patients who test positive for Covid-19.

She said fear still creeps up her spine every time someone is rolled into that room.

The first time someone was in it, she said, “I was paranoid the whole evening”. Her shift then was from 9pm to 7.30am.

“I felt so dirty when I got out of the isolation room. I felt like microbes were all over me,” she recalled.

“When I got home, I took a shower, and I kept checking my temperature, and observing if I had been coughing or sneezing.”

A patient had died on her watch.

The man was in the isolation room when his heart rate and other vital signs suddenly plummeted.

It took her and a fellow nurse about five minutes to go to a separate room and first put on a gown, goggles, protective covering for their head and feet, and then on top of that an air suit with a built-in filter.

When they got inside the isolation room, it was already too late to save him.

Maila, who is just 32, said she has seen her fair share of patients dying, but the melancholy never really goes away.

There’s an indelible sadness, for instance, in cleaning the frail, young bodies of babies before they are sent to the morgue, she said.

With Covid-19 now, the fear also does not go away.

“You used to work so you can travel, buy gadgets, clothes. Now, you realize you can die in a snap… We’re not immortal. We also get sick,” she said.

She worries constantly about getting sick. “You’re on your own here. You can’t rely on your housemates to take care of you,” she said.

But she is nonetheless glad the coronavirus pandemic caught her while she was still in Singapore.

“Because of its experience with Sars, Singapore is fully stocked,” she said.

She said while many nurses elsewhere in the world have to wear their PPEs for a whole shift, her hospital has more than enough PPEs that its health staff can change into a new set of PPEs each time they have to enter a Covid-19 ward.

She said she gets a morale boost from her patients, especially from fellow immigrant workers in menial jobs in construction and sanitation. They are the most effusive at showing their appreciation, she said.

“They’re straining to say their ‘thank you’ in English, but you can see it in their faces how grateful they are,” she said.

Maila said she almost packed her bags and left for the Philippines when Singapore was seeing its first cases of Covid-19 infections.

“I was stressed. When my supervisor asked me how I was doing, I cried. I wanted to go home. I wanted to resign,” she said.

But she said her supervisor knocked some sense into her.

“She told me: ‘How sure are you this won’t reach the Philippines? If you go home and this virus reaches the Philippines, you’ll end up without a job and maybe working in an ill-equipped hospital. Singapore is the safest place for you because we are prepared.”

“She was right,” said Maila.

But she does pine for home, and looks forward to that day when she can go back to her town and be with her parents.

“It will be one big reunion,” she said.