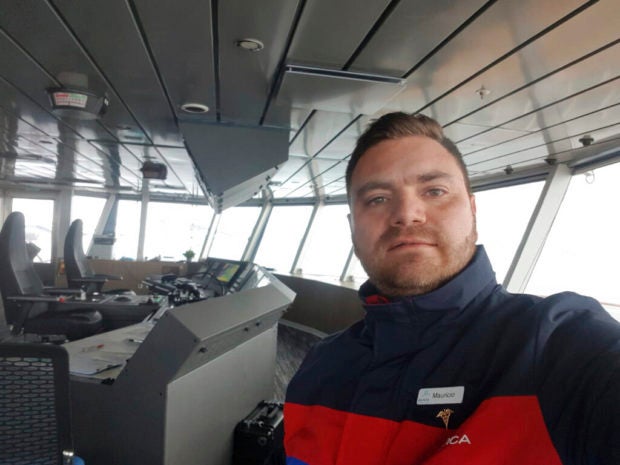 Dr. Mauricio Usme  is onboard the Greg Mortimer, a ship operated by the Australian firm Aurora Expeditions and owned by a Miami company. Dr. Usme said he was pressured by the captain and other executives from the cruise operator and owners to change the health declaration to be admitted into ports. More than half of the passengers and crew tested positive for COVID-19, including Dr. Usme. (Mauricio Usme via AP)

MIAMI — Carolina Vásquez lost track of days and nights, unable to see the sunlight while stuck for two weeks in a windowless cruise ship cabin as a fever took hold of her body.

On the worst night of her encounter with COVID-19, the Chilean woman, a line cook on the Greg Mortimer ship, summoned the strength to take a cold shower fearing the worst: losing consciousness while isolated from others.

Vásquez, 36, and tens of thousands of other crew members have been trapped for weeks aboard dozens of cruise ships around the world — long after governments and cruise lines negotiated their passengers’ disembarkation. Some have gotten ill and died; others have survived but are no longer getting paid.

Both national and local governments have stopped crews from disembarking in order to prevent new cases of COVID-19 in their territories. Some of the ships, including 20 in U.S. waters, have seen infections and deaths among the crew. But most ships have had no confirmed cases.

“I never thought this would turn into a tragic and terrifying horror story,” Vásquez told The Associated Press in an interview through a cellphone app from the Greg Mortimer, an Antarctic cruise ship floating off Uruguay. Thirty-six crew members have fallen ill on the ship.

The Centers for Disease Control and Prevention said last month that about 80,000 crew members remained on board ships off the U.S. coast after most passengers had disembarked. The Coast Guard said Friday that there were still 70,000 crew members in 102 ships either anchored near or at U.S. ports or underway in U.S. waters.

The total number of crew members stranded worldwide was not immediately available. But thousands more are trapped on ships outside the U.S., including in Uruguay and the Manila Bay, where 16 cruise ships are waiting to test about 5,000 crew members before they will be allowed to disembark.

The list of conditions and requirements the CDC and other countries have set for disembarkation have expanded as coronavirus cases and deaths have risen worldwide.

Cruise companies must take each crew member straight home via charter plane or private car without using rental vehicles or taxis. Complicating that mission, the CDC requires company executives to agree to criminal penalties if crew members fail to obey health authorities’ orders to steer clear of public transportation and restaurants on their way home.

“The criminal penalties gave us (and our lawyers) pause,” Royal Caribbean International President and CEO Michael Bayley wrote in a letter to crew members earlier this week, but he added that company executives ultimately agreed to sign.

Melinda Mann, 25, a youth program manager for Holland America, spent more than 50 days without stepping on dry land before finally disembarking from the Koningsdam ship Friday in Los Angeles. Before she was transferred to the Koningsdam, she tried to walk off another ship with other U.S. crew members last week but the ship’s security guards stopped them.

For 21 hours a day, Mann remained isolated in a 150-square-foot (14-square- meter) cruise cabin that is smaller than her bedroom in her Midland, Georgia, home. She read 30 books and was only able to leave her room three times a day to walk around the ship. Her contract ended April 18, so she was not paid for weeks.

“Keeping me in close captivity for so long is absolutely ridiculous,” Mann said in a telephone interview.

Earlier this week in Nassau, Bahamas, crew members from Canada aboard the Emerald Princess were told to prepare to be flown home in a charter plane. But the Bahamian government did not allow the ship to dock in the end.

Leah Prasad’s husband is among them. Prasad said she spends hours tracking down government agencies to help her husband, a Maitre D’Hotel for Carnival.

“He is getting discouraged. He is stuck in a cabin,” Prasad said. “It is not good for his mental health.”

Angela Savard, a spokeswoman for Canada’s foreign affairs, said the government was continuing to explore options to bring Canadians home.

For those aboard the Greg Mortimer in Montevideo, desperation is setting in, crew members told the AP.

The Antarctic cruise set sail from Argentina on March 15, after a pandemic had already been declared. When the first passenger fell ill, on March 22, the ship’s physician, Dr. Mauricio Usme, said he was pressured by the captain, the cruise operator and owners to modify the health conditions that had to be met for the ship to be admitted into ports.

Dr. Usme refused. The boat anchored in the port of Montevideo on March 27. More than half of its passengers and crew tested positive for COVID-19, and it wasn’t until April 10 that 127 passengers, including some who were infected, were allowed to disembark and fly to their homes in Australia, New Zealand, the U.S., Canada and Europe. Crew members were told to stay on board.

The doctor was hospitalized in an intensive care unit in Montevideo, along with a Filipino crew member, who later died.

“People are exhausted and mentally drained,” said Dr. Usme, now recovered and back on the Greg Mortimer. “It’s a complex situation. You feel very vulnerable and at imminent risk of death.”

CMI, the Miami-based company that manages the boat, said it has been “unable to get the necessary permissions” to get crew members of 22 nationalities home, but said they were all still under contract receiving pay.

Marvin Paz Medina, a Honduran man who works as the ship’s storekeeper, sent a video to the AP of his tiny cabin of about 70 square feet (6.5 square meters), where he has been confined for more than 35 days. “It’s hard being locked up all day, staring at the same four walls,” he said.

Paz Medina says his children keep asking him when he’s coming home, but he has no answers.

“We are trapped, feeling this anxiety that at any moment we can get seriously ill,” said Paz Medina. “We do not want this anymore. We want to go home.”