15 Cyprus police face probe on serial killings of 4 Filipinas, 3 others 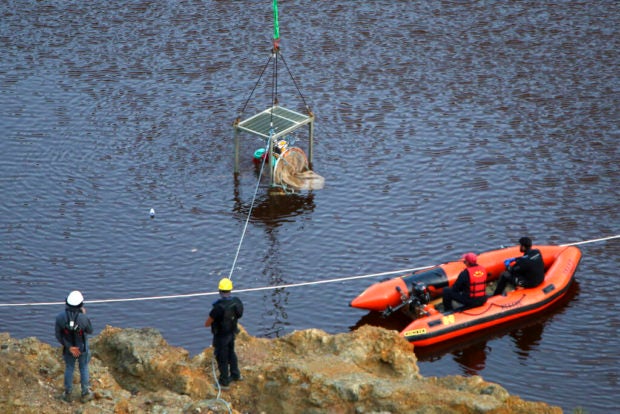 A diver is lowered into a man-made lake to search for suitcases containing the bodies of three victims, near the village of Mitsero outside of the capital Nicosia, Cyprus on May 2, 2019.  (AP)

NICOSIA, Cyprus — Cyprus’ top lawyer said Tuesday he has ordered a criminal probe into how police handled the country’s first serial killer investigation, which led to the conviction of an army officer for the murders of seven foreign women and girls.

Attorney General Costas Clerides said in a statement that 15 members of the force may have breached the law or been negligent in their duty.

Clerides said he launched the investigation after examining an Independent Police Complaints Authority report. The authority found some actions went beyond mere oversights on the part of some police force members and “constituted the basis” for establishing that a criminal offense may have been committed.

Clerides provided no further detail, but there were allegations at the time that police failed to take seriously initial missing persons reports about the victims.

The victims were three women from the Philippines and the daughter of one of them, a Romanian mother and daughter and a Nepalese woman.

Army captain Nicholas Metaxas, 35, was sentenced to seven consecutive life terms in prison after pleading guilty to premeditated murder and kidnapping over a 2½-year period.

The case, which shocked the small island nation, unraveled in April 2019 when the decomposing body of Mary Rose Tiburcio, 38, from the Philippines, was found by chance down a flooded shaft in an abandoned copper mine.

Metaxas, a divorced father of two small children, initially refused to cooperate with investigators, but eventually confessed to the killings in a 10-page handwritten note.

In handing down its sentence, the court said Metaxas appeared to have focused on defenseless women, most of whom came to Cyprus looking for work.

Prosecutors said he sought out many of his adult victims on online social networks using the handle “Orestes35” and had sex with them before killing them.

Cyprus serial killer gets 7 life terms for killing 4 Filipinas, 3 others