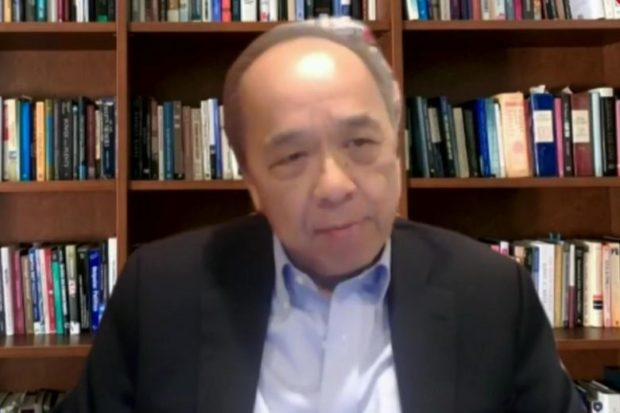 SINGAPORE — As the United States comes to grips with the Covid-19 outbreak, pressure will intensify in Washington to blame China for the devastating pandemic, and in turn further inflame ties between the two powers, Professor Khong Yuen Foong said on Tuesday (April 28).

But as both sides engage in finger pointing, the danger is that Asean nations will also be pressed to pick sides, added Prof Khong, who is from the Lee Kuan Yew School of Public Policy (LKYSPP).

Prof Khong was giving his take on how the Covid-19 crisis will affect relations between the US and China at an online panel discussion that also included former diplomat Kishore Mahbubani and Professor Alicia Garcia-Herrero, chief Asia-Pacific economist at French bank Natixis.

The discussion, which was streamed on Facebook, was moderated by East Asian Institute director Bert Hofman and organized by the Lee Kuan Yew School.

The panelists agreed that the pandemic could not have come at a worse time for the bilateral relations of both countries.

Ties were already strained by the trade war and ongoing strategic rivalry while the US presidential elections in November will inject divisive bipartisan politics into the mix.

Prof Khong said: “As the curve flattens, people will ask what happened? There will be enormous pressure in the US and perhaps Europe to assign blame and to seek accountability.”

This blame game is a “key weapon” that US President Donald Trump and his Republican party will use to direct accumulated anger at the source of the pandemic, “focusing on allegations on China covering up the pandemic and not being transparent about the casualties”.

The virus was discovered in the Chinese city of Wuhan last December before becoming a global crisis, infecting over three million people, killing more than 200,000, and causing economies to sputter to a halt under strict lockdowns.

Mr Trump has already repeatedly referred to Sars-CoV-2, the virus that causes Covid-19 disease, as a Chinese virus, to Beijing’s chagrin.

Last week, a leaked Republican memo advised its election candidates to attack China over the coronavirus in order to deflect blame from Mr Trump’s handling of the domestic spread of the disease.

This finger-pointing will only intensify as the US election draws closer, forcing Democratic presidential front runner Joe Biden to also show that he is tough on China, said Prof Mahbubani.

“I think we will see a very bad 2020. The best we can hope for is that after the elections are over, and let’s say, for example, if Joe Biden wins, I expect the temperature to go down a little bit,” he said.

Prof Garcia-Herrero said Covid-19 could accelerate the decoupling between the US and China.

She noted that the US and others have realized that their dependence on “China’s centricity in the global value chain” had caused problems, such as when China shut down its economy by imposing strict lockdowns.

Prof Khong said that as relations become more tense, both Washington and Beijing will put pressure on Asean countries to pick sides, noting that it will be increasingly difficult for the regional grouping to serve as a “honest broker” between the two.

Sitting on the fence will be increasingly difficult, he said, adding that Asean countries will be watching which major power recovers faster from the economic carnage.

“I will not underestimate the US’ economic resilience and technological ingenuity, but if China were to do better on the economic front, its narrative about being the wave of the future will fall on receptive ears in South-east Asia,” he said.