Sizing up Trump’s green-card halt: Is it just temporary? 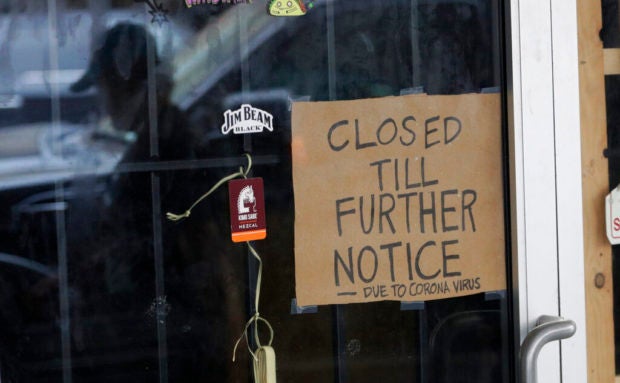 A man wearing a face mask is reflected in the door of a business closed due to the COVID-19 outbreak in San Antonio. (AP)

SAN DIEGO — Pamela Austin, a recruiter at Adventist Health Bakersfield in California, made seven job offers to foreign nurses in February and just finished a first round of interviews with 12 more candidates. They are from all over the world, including the Philippines, United Kingdom, Australia and Malaysia.

The international candidates fill the private hospital’s critical need for experienced nurses who can work in emergency rooms and intensive care units, Austin said — jobs that can’t be met only with U.S. nurses, many of whom are recent graduates.

That need could go unfilled, however, if President Donald Trump extends a 60-day hold on green cards he ordered in the name of protecting American jobs amid the coronavirus outbreak.

“It would be a huge setback,” Austin said. “Those are holes I don’t have people to fill.”

Trump says the measure is necessary at a time when unemployment has climbed to levels last seen during the Great Depression.

Critics have dismissed the move as the president’s veiled attempt to achieve cuts to legal immigration that he previously suggested but couldn’t persuade Congress or the courts to accept — and to distract voters from his handling of the pandemic.

But immigrant advocates and political opponents are not the only ones who oppose the measure: Hardliners from Trump’s base say it doesn’t go far enough to limit immigration.

The order “is designed to satisfy powerful business interests that value a steady flow of cheap foreign labor,” Dan Stein, president of the Federation for American Immigration Reform, wrote in a letter to the president Thursday.

The Center for Immigration Studies, another hardline group, said the 60-day pause “will provide little relief to Americans” and criticized an exemption for foreigners who agree to invest at least $900,000 in the U.S.

The proclamation, signed Wednesday, excludes temporary nonimmigrant visas for hundreds of thousands of workers a year, including farm workers, software engineers and others in fields deemed to have labor shortages. It doesn’t apply to green-card applicants already in the United States.

Many families will be barred from immigrating as long as the freeze lasts — more than 200,000 people at last year’s levels. Spouses of U.S. citizens and their children under 21 are exempt, but parents, adult children, grandchildren, adult siblings and other relatives aren’t.

Carl Shusterman, a Los Angeles immigration attorney who advises hospitals, said he had hoped Trump’s proclamation would provide a blanket exemption for nurses, who often arrive on green cards. Instead, it only exempts health care workers whose work is deemed essential to recovering from the COVID-19 outbreak.

“Embassies and consulates make the decisions,” he said. “They don’t have any special expertise in COVID-19, like none of us do.”

Houston immigration attorney Raed Gonzalez said he doesn’t expect the suspension to have much of an effect — at least in the short term — because embassies and consulates had already halted routine visa processing last month in response to the pandemic.

“This is more of a show from the administration than anything else,” he said.

But other immigrant advocates predict profound changes if the measure becomes permanent.

Doug Rand, co-founder of Boundless, a company that advises families and individuals on green cards, estimates 358,000 applicants a year would be unable to get permanent residency if the order were extended.

He said the casualties would include roughly 50,000 diversity visas each year for countries that send fewer people to the U.S., and that the measure would have a big impact on immigrants from Asia, Central America and eastern Europe.

Rand says Trump is using the pandemic to achieve changes to the immigration system that he couldn’t get past Congress or the courts. He called the 60-day halt a “double fig leaf” to make the measure more palatable.

The edict has similarities to legislation Trump tried unsuccessfully to pass in 2017 that would slash legal immigration, largely through family-based visas that the president has referred to derisively as “chain migration.”

Last month, the administration effectively suspended asylum by rapidly expelling anyone who enters the country along borders with Mexico and Canada. The Centers for Disease Control and Prevention this week extended the policy through May 20 on public health grounds.

Trump told reporters that he may extend the most recent order or modify it next week, in two months or “as we go along” to be “made tougher or made less tough.”

Joe Biden, Trump’s presumed Democratic rival in November’s election, echoed those who called the measure an attempt to divert attention from the president’s handling of the pandemic.

“Rather than execute a swift and aggressive effort to ramp up testing, Donald Trump is tweeting incendiary rhetoric about immigrants in the hopes that he can distract everyone from the core truth: He’s moved too slowly to contain this virus, and we are all paying the price for it,” Biden said Tuesday.

Matt Hill, a campaign spokesman, said Thursday that Biden would not maintain the policy if elected.