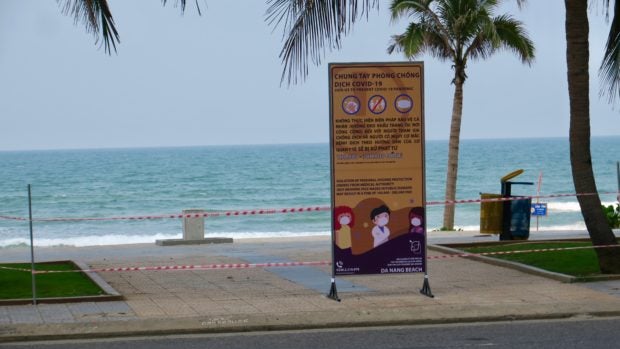 A sign in Vietnamese and English reminds people about wearing masks. HUGH BOHANE

DA NANG, Vietnam — Filipino migrant workers across Southeast Asia are considered among the most vulnerable to the COVID-19 pandemic mainly for one reason—their pockets are not as deep as those of other migrant communities in the region. This is the case nonetheless in Vietnam for Filipino workers as well.

On April 22, the Vietnamese government decided to extend its social distancing campaign for another week in areas that are considered high-risk. Hanoi and Ho Chi Minh have now been downgraded to medium-risk. Da Nang is currently considered low-risk and some restrictions will be lifted, starting April 23.

Many observers have praised the Vietnamese government for its robust response to the fight against coronavirus and in keeping infection rates low. It has been an extraordinary effort, considering that Vietnam shares its border with neighboring China, where the pandemic originated.

Firstly, Vietnam was quick to shut its border with China in early February, which at the time, was where the virus was still spreading in Wuhan, the capital city of Hubei province.

Vietnam adopted strict quarantine measures and traced anyone who may have come into contact with potential carriers. Additionally, all schools and universities were temporarily closed in Vietnam. For nearly two months, businesses had been shut except for grocery stores, pharmacies, ATMs, and hospitals. Moreover, the government was able to inject US$1 billion into the economy. All of these measures were made in a timely and prompt manner.

The Filipino population in Vietnam was estimated to be around 5,000 people back in 2013 and as of yet there have been no official updates on the current census.

One of these Filipinos is Mike Coronel, who is currently based in Da Nang.

Coronel is registered as a businessman who has been working in multimedia and graphic design firm and holds a two-year business visa. He also works as a musician and lectures in photography at a university in Da Nang part-time. However, the pandemic has since halted his work, prompting him to live off his savings for at least a few more months.

Coronel stays updated on COVID-19 through Facebook groups along with other Filipinos in Vietnam. The Inquirer made phone calls to the Philippine Embassy in Hanoi to check what staff members were doing for Filipinos in relation to the pandemic, however they all went unanswered.

Coronel said the embassy has been giving away relief packages and registered OFWs are the target beneficiaries of these.

The embassy had chosen pickup centers for the packages to be delivered to registered OFWs. These relief goods included canned goods, instant noodles, rice and crackers. This is an identical scenario to what Filipino politicians have been doing for their citizens in Filipino villages.

Some of Coronel’s Filipino friends had been asking him for loans to renew their visas in early April. He said the embassy hasn’t been able to pay for visas for Filipinos and told him if they can’t afford to live in Vietnam, they could apply for financial help to return to the Philippines.

“If everything goes bad, I think I will have no choice but to go back to the Philippines,” he said.

Coronel mentioned that many of his Filipino friends in Vietnam are musicians and therefore they are in a more precarious financial situation than he is.

Before the pandemic, Ann Lee, a Filipino national, had been working as a part-time waitress, babysitter and tutor at a kindergarten in Ho Chi Minh. These jobs have since been on hold and she is also now living off her savings.

“My life here in Vietnam was simple and I would do my job properly but now my life is quite difficult because of the virus and I need to stay at home,” said Lee.

Lee is single but shares an apartment in Ho Chi Minh with fellow workers. She admits that she does feel lonely at times. “It’s a very difficult situation, not only for me but for many people in Vietnam and around the world, but I need to face it,” Lee said.

“It’s not too hard, I always pray to God that everything will change and things will be okay soon,” she said.

IJ Gusto is also from the Philippines. Before COVID-19 she was working as a bartender in a resort in Da Nang.

She said she had planned to return to the Philippines but flight cancellations and airport closures prevented her from doing so.

“So, I don’t have any other choice but to stay,” she said.

“I love it here in Vietnam but being broke and jobless makes it harder for me to stay. I need money to be able to pay my rent and buy food,” she said.

Gusto added that she hopes that everyone will survive the tough times and that she could find new jobs soon, so she can continue to live out her Vietnam dream.

As the restrictions begin to lift in Da Nang, Filipinos in Hanoi and Ho Chi Minh have a reason to be optimistic that their lives will also return to normal soon. There are at least 143 Filipinos in Vietnam, who recently lost their jobs and/or became stranded and have since returned to the Philippines on a chartered flight.