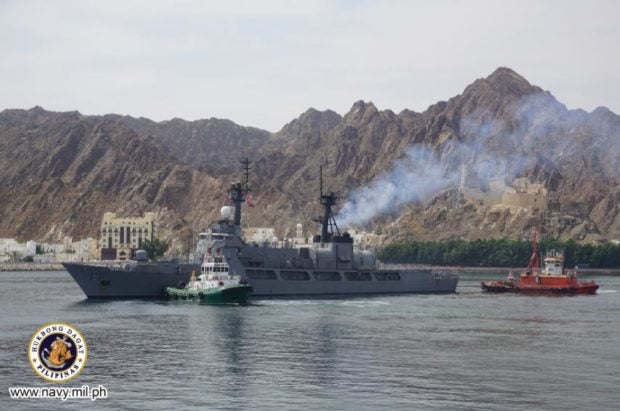 The Navy vessels are now on their way back to the Philippines but would make a short stop at Port Cochin in India to pick up personal protective equipment (PPE) donated by a foreign company, according to Lt. Ma. Christina Roxas, Navy public affairs office acting director.

The ships are expected to arrive in Manila by the third week of May.

The two vessels left the port of Manila last Jan. 15 and made a brief stop in Sri Lanka to refuel. They reached Oman on Feb. 6 and docked at the Port Sultan Qaboos.

They were deployed to Oman to serve as transport of OFWs who would want to be repatriated following the assassination by the United States of top Iranian general Qasem Soleimani, which drove tensions close to a full-blown war in the Middle East.

Tensions have eased in recent months, but the ships were ordered by higher Philippine authorities to stay put.

Brig. Gen. Edgard Arevalo, Armed Forces of the Philippines spokesperson, said in early March that most OFWs in the Middle East have opted not to go home to the Philippines.

The Navy considered the mission as a milestone for the service because it included “historic sail” on the Indian Ocean by Philippine Navy ships.

This showed that the Navy was “now capable to sustain operations across open oceans.”

Port visits to Sri Lanka and Oman, Roxas said, “paved the way for reinforcing diplomatic ties with these countries.”

The Task Force 82, headed by Col. Noel Beleran, made sure no one among the 400 sailors who went on the mission had COVID-19 symptoms before the team’s return to the Philippines.