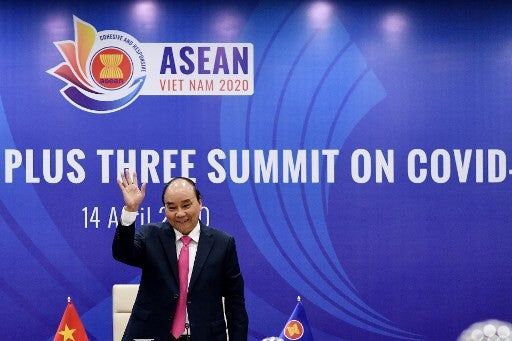 Vietnam’s Prime Minister Nguyen Xuan Phuc greets other member country leaders along with leaders of China, Japan and South Korea before addressing a live video conference on the special ASEAN Plus Three Summit on the COVID-19 pandemic in Hanoi on Tuesday, April 14. AFP/Manan Vatsyayana via The Jakarta Post/Asia News Network

JAKARTA — The leaders of Southeast Asian countries agreed on Tuesday to establish an Asean COVID-19 Response Fund as a means to help procure crucial medical supplies and equipment for frontline response and preventive efforts in all member states, as the deadly virus that causes the disease continues to tear through the region.

As of Tuesday, the virus has infected more than 20,000 people in the region, killing nearly a thousand. It has also ravaged the region’s economy, forcing member countries to shave off almost 4 percent from previous growth forecasts, according to one estimate.

Asean Secretary-General Lim Jock Hoi also attended the meetings, as did World Health Organization director general Tedros Adhanom Ghebreyesus, who said it was too soon for countries to start claiming victory over the virus outbreak – China, Japan and South Korea have had varying levels of success in mitigating the health crisis.

Proposed by Thailand, the COVID-19 fund will deal with the scarcity of medical supplies caused by the pandemic. It will be sourced from money initially funneled into the organization through existing development and cooperation funds, regional officials have said, as member states looked for ways to curb the spread of the disease and treat infected patients effectively.

The dollar amount has not been officially released yet, but the fund is expected to pool 10 percent from the Asean Development Fund and cooperation funds with partner countries. It was not immediately clear whether the APT partner countries have agreed to the provision, as contents of a joint statement from the summit was not immediately revealed.

The Foreign Ministry’s director general for Asean cooperation, Jose Tavares, explained that the Asean Secretariat and the national agencies and/or health ministries of member states would be able to utilize the COVID-19 funds for procuring much needed medical supplies and equipment.

These would include equipment for frontline workers and medics, rapid test kits, personal protective equipment and provisions of medicine. The funds will also be used to finance long-term research and development into antiviral drugs and vaccines.

“The Asean Secretariat is still calculating how much is needed, but the proposal is to take 10 percent of the total of the two sources,” he told The Jakarta Post on Tuesday.

The ASEAN Development Fund, which the group uses to support the implementation of development goals, comprises member state contributions of US$1 million.

The Asean Plus Three Cooperation Fund, launched in 2008 with an initial investment of $3 million, also pools contributions amounting to $900,000 from Plus Three partners and $300,000 from Asean member states, according to the South Korean foreign ministry’s website.

Bilaterally, Japan has made a total of $680 million in financial contributions under the Japan-Asean Integration Fund (JAIF) established in 2006, according to the JAIF website.

The Asean-South Korea Cooperation Fund, established in 1990, has been operating with an annual budget of $7 million from 2015 and is worth $103 million as of December 2018.

China, meanwhile, contributed $11.3 million to the Asean-China Cooperation Fund last year. As of September 2019, the ACCF comprises 131 projects with a combined cumulative value of over $26 million since its establishment 22 years ago, according to Asean Secretariat website.

Foreign Minister Retno LP Marsudi said that Jokowi endorsed the move, noting that “the budget reallocation is needed as an emergency measure to provide the medical equipment to deal with COVID-19 for ASEAN countries that need it”.

Other leaders have also expressed their support, with Malaysian Prime Minister Muhyiddin Yassin saying the fund would expand the scale of existing emergency stockpiles for any future pandemics that the region may face.

“We must further develop our regional reserves of medical supplies, as well as utilize relevant ASEAN reserve warehouses to support the needs of ASEAN member states in public health emergencies,” he said, according to a statement released after the meeting.

After the APT Summit, Retno told reporters that both sides were committed to utilizing all existing mechanisms as well as newer initiatives such as the COVID-19 response fund, saying that there was also a proposal to allocate other Asean cooperation funds for emergency situations. Another initiative was the establishment of an Asean Center for Infectious Diseases, which the minister said was proposed by Japan.

Ibrahim Almuttaqi of The Habibie Center’s Asean studies program said it was “sensible” to reallocate unused funds for the regional COVID-19 response, although he bemoaned the 10 percent cut as inadequate.

“This is perhaps a conservative calculation as Asean does not want to disrupt already approved budget allocations, and hopefully later it can try to raise the figure depending on current needs,” Ibrahim told the Post on Tuesday.

Jose said that 235 Asean programs had been postponed or canceled as a result of COVID-19.