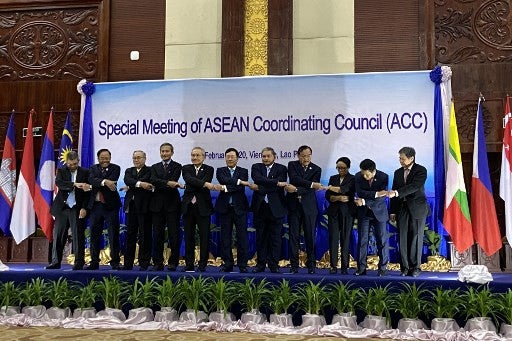 JAKARTA — Limited by the need for self-isolating measures, Asean leaders will convene a virtual summit this week to propose various initiatives, officials say, as the bloc seeks collective and coordinated action against the COVID-19 pandemic.

The 10-member Southeast Asia grouping has held a number of cross-sectoral meetings over the past few weeks, deliberating on issues as varied as collaborative outbreak investigations and supply chain maintenance, all of which will be brought onto the virtual table when leaders meet for a special summit on Tuesday.

The summit is expected to be followed by an Asean Plus Three Summit, an important forum for collaboration with major development partners China, Japan and South Korea, Indonesian Foreign Minister Retno LP Marsudi told reporters in a virtual press briefing earlier this week.

China, Japan and South Korea have shown varying degrees of success in curbing the outbreak.

Speaking after an online ministerial huddle of the Asean Coordinating Council on Thursday, Retno assured that “the Asean diplomatic machine continues to spin” as member states try to collectively overcome a pandemic that has infected at least 15,000 people and claimed the lives of more than 500 in the entire Southeast Asia region.

She said the ACC was determined to ensure the bloc’s synchronous and intersectoral efforts to combat the viral outbreak find wider implementation among member states.

“Indonesia stresses the importance of implementing the results of the Asean and Asean Plus Three Health Ministers’ Meetings,” Retno said.

Asean senior health officials have convened several video conferences, including with their Chinese, Japanese and South Korean counterparts, to exchange information on containment and mitigation measures and identify needs for technical support and medical supplies in some Asean countries.

“I believe that through efforts to strengthen collaboration and a coordinated response in the region, we can win the war against COVID-19,” Terawan said in a statement from the ministry.

The bloc has come under criticism over its slow response and its members’ proclivity for putting national interests first, despite being able to draw from a reservoir of existing mechanisms and accumulated experiences.

Asean’s traditional response to emergency and crisis situations has been to convene emergency meetings of leaders or relevant ministers to discuss regional solutions. When the Severe Acute Respiratory Syndrome (SARS) hit the region in 2003, Asean leaders met in Bangkok and rolled out coordinated measures to fight the disease.

However, some experts say that Asean as a collective seems to be dragging its feet in the fight against COVID-19. And as the pandemic rages on, risks and fears of infection are magnified by geographical proximity and regional connectivity — two aspects of the Asean Community.

The Sri Pelaling tabligh gathering in Kuala Lumpur, which drew 16,000 participants in late February, not only made Malaysia the epicenter of the disease in Southeast Asia but also caused a spike in COVID-19 cases in neighboring Indonesia, Brunei and even Vietnam, said Hoang Thi Ha, lead ASEAN researcher for political and security affairs at the Singapore-based ISEAS-Yusof Ishak Institute, in an op-ed published in The Jakarta Post on Wednesday.

There is, however, a growing urgency among member countries to step up collaboration.

At Thursday’s ACC meeting, led by Vietnamese Deputy Prime Minister and Foreign Minister Pham Binh Minh, Retno also underlined the importance of protecting migrant workers as one of the most vulnerable groups in the region, as well as a common commitment to ensuring the continued flow of goods throughout the region.

As the current Asean chair, Vietnam has proposed to set up regional medical and essential goods reserves in case of an emergency, building a common health response based on guidance from the World Health Organization and organizing online drills at the Asean Center of Military Medicine on responding to epidemics, Viet Nam News reports.

The bloc is also working to establish a COVID-19 Asean Response Fund that would be drawn in part from the existing Asean Development Fund.

“Malaysia is of the view that we must prioritize the COVID-19 Asean Response Fund to expand the scale of existing emergency stockpiles for pandemic responses with items such as face masks, test kits and protective equipment. I understand there are shortages globally, but we must be prepared for any eventuality,” Malaysian Foreign Minister Hishammuddin Hussein said recently as quoted by The Star.

The establishment of the Asean fund was endorsed by the region’s foreign ministers on Thursday, according to the Philippines’ Foreign Ministry.

“We have received very strong commitments from China and the United States in supporting and uniting with Asean to fight the pandemic,” Deputy Foreign Minister Nguyen Quoc Dung said as quoted by Viet Nam News.