Bayanihan spirit in Thailand in times of COVID-19 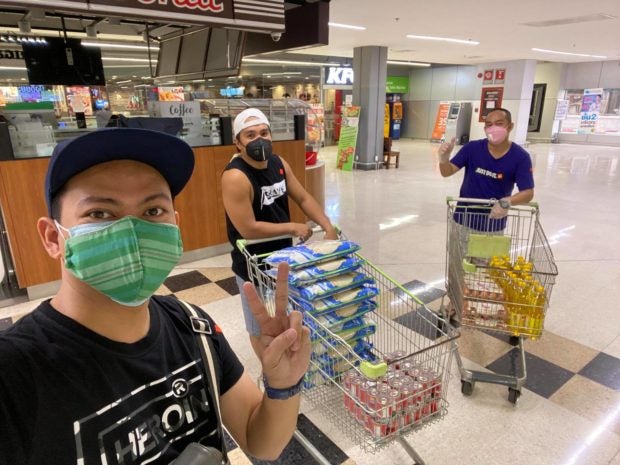 BANGKOK – Mechelle delos Reyes, a teacher in Patthalung, South of Thailand, still holds a Non-B (working visa) and work permit until the end of April. Technically, she is still employed. However, at the end of the semester in March, she was only paid half of her salary. With no other income and visa expiring soon, she opted to go home to her hometown in Central, San Jose, Occidental Mindoro.

“I already have a ticket but all commercial flights in Thailand are all canceled,” Delos Reyes said in a phone interview.

Delos Reyes and five other OFWs from San Jose, wrote an open letter addressed to San Jose Mayor Romulo Festin asking for financial assistance for their repatriation. The group also assured the mayor that they would undergo voluntary quarantine. Until now, there is no word from the Mayor.

Delos Reyes stays for free in the school housing until her repatriation, which may or may never come.

Still, delos Reyes is quite lucky unlike the hundreds of displaced Filipino workers literally begging for food in many provinces in Thailand. Many schools have no work-no pay scheme.

On Tuesday, the Thai government announced that government schools will re-open on July 1 instead of May 16, the regular school calendar.

In a survey done by PinoyThaiyo, an online website based in Thailand reveals that 81% of the Filipinos are affected by the COVID-19. The week-long survey which started on March 19 was participated by 1,047 Filipino workers from different provinces.

In a 2017 report of the Department of Employment of Thailand, Filipinos have taken top migrant workers out of the nine countries taking jobs in teaching, management, engineering, architecture and business with 14,830. In a 2015 record, there were 17,921 Filipinos in Thailand according to the Philippine Embassy. However, the figure could change significantly due to the movement of the Filipinos. It is assumed that the 4,000 undocumented Filipinos on the record as of December 2015 were either tourists or workers with expired work permits or not issued with working visas.

Some companies and schools provide insurance for their employees. In some universities and government schools, workers are provided with a Pragansangkoom or social security (SS) insurance under the Workmen’s Compensation Act of 1994. The SS provides unemployment benefits, medical benefits which now includes COVID-19, maternity benefits, cremation, and repatriation.

Like many OFWs, Delos does not have SS that could have cushion the impact of joblessness.

Thailand has been steadily hiring English teachers since 2000. As an ASEAN member country, Filipinos can stay in Thailand for 30 days visa-free. Every year, Filipinos come to work either as teachers, hotel workers or nannies. Upon employment, they are provided with visas and work permits. However, some jobs like in the hotel and entertainment industry, they opted for visa-runs or border crossing to Laos, Cambodia and Myanmar. Visa run means an application for a 90-day visa at Thai Consulates in the Mekong Region.

The border closings which started on March 20 and the succeeding days affected the Filipinos and other migrant workers seeking visas either for work or tourism in Thailand.

In spite of the growing numbers of Filipino workers, Thailand and the Philippines has no Bilateral Labor Agreement (BLA) or MOU (Memorandum of Understanding) that would guide them in negotiations in economic and labor issues that may arise in the host country. Thailand has MOU with Laos, Cambodia and Myanmar. 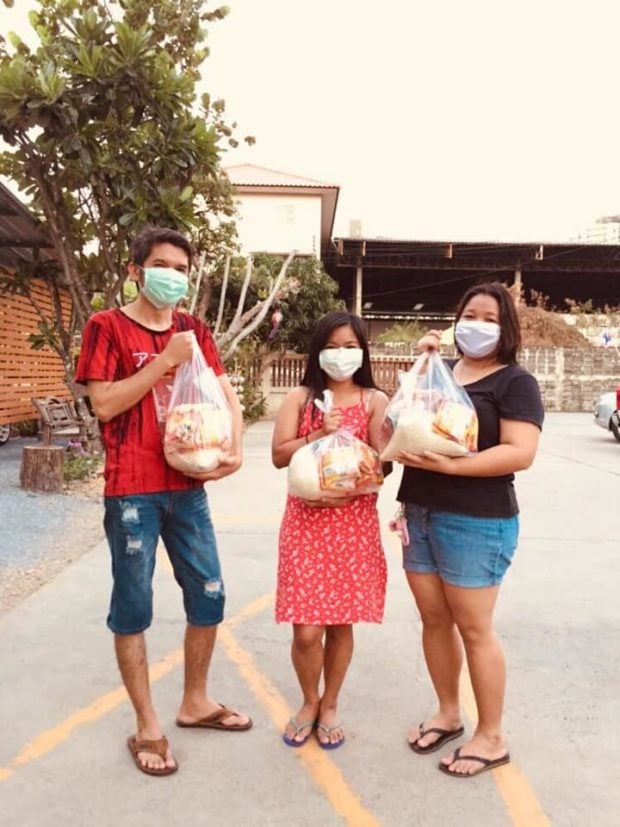 Bayanihan spirit in times of COVID-19

In Bangkok, Jaycee Dilan, also an OFW and a leader of the Filipino Community in partnership with United Filipinos in Thailand (UFT) has been providing food packs to 109 families or roughly 300 individuals out of work Filipinos in Nonthaburi Province since the last week of March. His group plans to send food packs twice a month.

How long would the food packs sustain the Filipino community?

“It is a continuing program, probably 3-4 months,” Dilan said.

The Ateneo LSE (Leadership, Financial Literacy and Social Entrepreneurship) and Pinoythaiyo launched a fund-raising campaign to assist Filipinos and their dependents. To date, the groups received over 80 thousand baht.

On a Facebook page, Toto Inasal, a Filipino-Thai owned restaurant invites anyone who is jobless, no income, mom with babies to drop by at their kiosk in Pratunam district from 11 am to 2 pm for a free meal.

The Thai Ministry of Foreign Affairs has announced some leniency to those ‘stranded’, both workers working undocumented and legitimate tourists are given 30 days to leave the country. The Philippine Embassy issues letter upon the requests of an individual guaranteeing that the holder of the letter will leave the country as soon as the ban on air travels is lifted, which is approximately 30 days.

In a message sent by Consul General Val Roque, he mentioned that the Philippine Embassy has issued over 1,400 visa letters to the Thai immigration ‘to ensure the legal stay of the Filipinos’ in the Kingdom.

Further, he assured the Filipinos that repatriation flights request is ongoing with the OUMWA (DFA Office of the Undersecretary for Migrant Workers’ Affairs) since March 23. OUMWA is responsible for the provision and overall coordination of all Assistance to Nationals (ATN) and legal services to Filipinos overseas.

Except for repatriation flights, military flights, emergency landing, humanitarian aid, medical and relief flights, and cargo flights, the Civil Aviation Authority of Thailand (CAAT) has banned all commercial flights from April 6 until April 18 to contain the novel coronavirus.
Roque calls for the support of the Filipino Community in Thailand in this situation.

“We hope that Filcom can drive the bayanihan initiative of giving rice packs to the neediest kababayans because the Embassy cannot do it alone.”

From their personal funds, the staff of the Philippine Embassy donated 160 bags of 5-kilogram rice per bag to Filipino workers in Samui and Phuket.