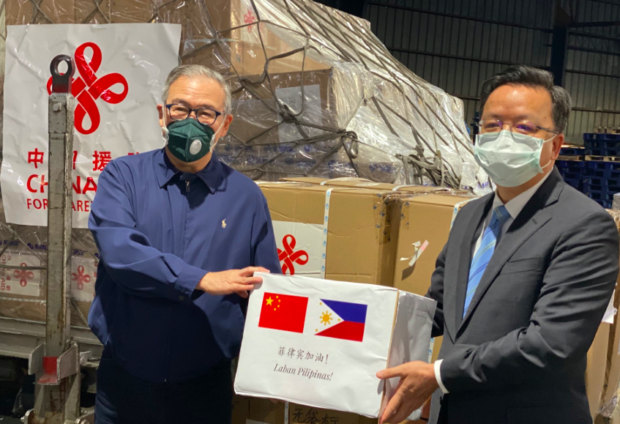 MANILA, Philippines — The Chinese Embassy in Manila on Sunday denied that the test kits that supposedly had low accuracy or yield inaccurate results came from donations made by the Chinese government.

In a statement, the embassy further refuted the Department of Health’s “irresponsible remarks” claiming that some of the test kits, which formed part of the Chinese donation to the Philippines last March 21, were not used because it only showed 40-percent inaccuracy.

“The test kits mentioned by the DOH official on 28 March 2020 during the press briefing were neither tested by RITM (Research Institute for Topical Medicine) which did not receive any kit sample for lab validation, nor donated by the Chinese government,” the embassy said.

“The Chinese Embassy firmly rejects any irresponsible remarks and any attempts to undermine our cooperation in this regard,” it added.

Citing clarification made by the DOH, the embassy said the test kits donated by the Chinese government were “of high quality.”

“According to the clarification of the DOH, the two batches of 2,000 BGI PCR-type test kits and 100,000 Sansure PCR-type test kits donated by the Chinese government have been assessed by the Research Institute for Tropical Medicine (RITM) to be at par with World Health Organization-provided kits, and those test kits are of high quality and standards and have no accuracy problems, which are being used in Philippine test laboratories and have helped accelerate the testing process,” it said.

Health Secretary Francisco Duque III assured there is “nothing wrong” with the test kits donated by the Chinese government.

“Hi! There is nothing wrong with the Real Time-Polymerase Chain Reaction machine which is used for generating positive or negative result as the case may be,” Duque said in a text message released by the embassy.

Duque added that the test kits were “very good” and at par with the standards of WHO and approved by the RITM.

The DOH earlier said the test kits from China were simultaneously used with the ones for the World Health Organization (WHO) to ensure the former passes the standards of the latter.

The health department further said it authorized the use of Sansure test kits since it had the same results with those of WHO’s.

Meanwhile, an increase in the number of cases could be expected as the various subnational laboratories begin their operations, DOH said.

Read Next
Singapore donates 40,000 COVID-19 test kits to PH
EDITORS' PICK
PH COVID-19 cases near 19K mark, as recoveries breach 4,000
PH walks back, suspends VFA termination ‘upon the President’s instruction’
Leveling up your ‘lutong bahay’ with the kitchen companion you never knew you needed
San Juan City to launch pop-up bike lanes
Cherry Mobile teams up with Cloud Panda PH, launches online store
Over 30 health workers felled or sickened by COVID-19 got no aid from ‘Bayanihan’ Act
MOST READ
PH walks back, suspends VFA termination ‘upon the President’s instruction’
More health workers to resign if gov’t fails to address their concerns – group
Calida ‘just the lawyer, not the client’ and must ‘never lose his cool’ – Macalintal
7 members of nurse’s family in Laguna catch COVID-19
Don't miss out on the latest news and information.