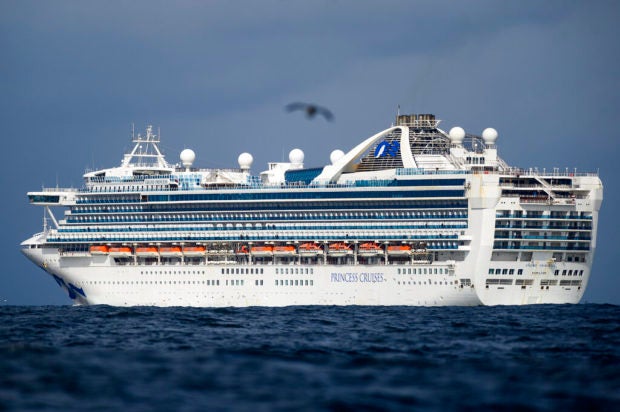 Carrying multiple people who have tested positive for COVID-19, the Grand Princess maintains a holding pattern about 30 miles off the coast of San Francisco on Sunday. The cruise ship is scheduled to dock at the Port of Oakland on Monday. (AP)

SAN FRANCISCO — Gov. Gavin Newsom and the mayor of Oakland sought Sunday to reassure the public that none of the passengers from a ship with at least 21 cases of the new coronavirus will be released into the public before undergoing a 14-day quarantine.

The Grand Princess carrying more than 3,500 people from 54 countries is expected to dock in Oakland, in the east San Francisco Bay, on Monday and was idling off the coast Sunday as officials prepared a port site.

There are around 500 Filipino crew members aboard the ship.

“This is a time that we must be guided by facts and not fears and our public deserves to know what’s going on,” said Mayor Libby Schaaf. She stressed that she had received assurances the ship would stay in the port for the shortest time possible. Officials said it could take up to three days to unload, with those needing acute care or hospitalization getting off first.

The port at Oakland was chosen because of its proximity to an airport and a military base, Newsom said. U.S. passengers will be transported to military bases in California, Texas and Georgia. All will be tested for the COVID-19 virus and will remain under a 14-day quarantine, federal officials said.

The 1,113-member crew, 19 of whom have tested positive for the new virus, will be quarantined and treated aboard the ship, which will dock elsewhere, Newsom said.

“That ship will turn around — and they are currently assessing appropriate places to bring that quarantined ship — but it will not be here in the San Francisco Bay,” he said.

Meanwhile, the U.S. death toll from the virus hit 21, with all but three victims in Washington state. As testing increased, the number of infections in the United States climbed above 500.

Oregon Gov. Kate Brown declared a state of emergency on Sunday to contain the new coronavirus after the number of confirmed cases doubled from the previous day to 14.

Donna LaGesse and her sister-in-law Jackie Eilers had a small celebration in their cabin Saturday night after the captain announced the ship would soon dock. She said they’re maintaining a positive attitude, watching exercise videos and re-runs of “The Love Boat.”

“We’re keeping our senses of humor. We’re laughing at the whole situation,” said LaGesse, 64, of Greenville, North Carolina. “We’re lucky because we have a room with a balcony so we can get some fresh air.”

She praised the ship’s crew, who have been “bending over backwards for us. I can’t imagine how difficult it’s been for them.”

The Department of State was working with the home countries of several hundred passengers to arrange their repatriation.

Canada announced it was sending a plane to collect nearly 240 Canadians on the Grand Princess. Foreign Minister Francois-Philippe Champagne said in a statement Sunday that those who have not shown any symptoms of the new virus will be taken to a military base in Trenton, Ontario, for a two-week quarantine.

The Grand Princess had been forbidden to dock in San Francisco amid evidence that the vessel was the breeding ground for a cluster of at least 20 cases that resulted in at least one death after a previous voyage.

The ship was heading from Hawaii to San Francisco when it was held off the California coast Wednesday so people with symptoms could be tested for the virus.

Grant Tarling, chief medical officer for Carnival Corporation, said it’s believed a 71-year-old Northern California man who later died of the virus was probably sick when he boarded the ship for a Feb. 11 cruise to Mexico.

The passenger visited the medical center the day before disembarking with symptoms of respiratory illness, he said. Others in several states and Canada who were on that voyage also have tested positive.

The passenger likely infected his dining room server, who also tested positive for the virus, Tarling said, as did two people traveling with the man. Two passengers now on the ship who have the virus were not on the previous cruise, he said.

A cruise ship was being held off the coast of Florida Sunday awaiting test results on whether two crew members who transferred there from the Grand Princess have contracted the new virus. The Coast Guard delivered testing kits to the Regal Princess on Sunday morning and the U.S. Centers for Disease Control and Prevention issued a “no-sail order” for the ship.

Another Princess ship, the Diamond Princess, was quarantined for two weeks in Yokohama, Japan, last month because of the virus. Ultimately, about 700 of the 3,700 people aboard became infected in what experts pronounced a public-health failure, with the vessel essentially becoming a floating germ factory.

Hundreds of Americans aboard that ship were flown to military bases in California and other states for two-week quarantines. Some later were hospitalized with symptoms.

Newsom warned that Californians should expect more cancellations and closures, after the largest school district in Northern California canceled classes for a week when it was discovered a family in the district was exposed to COVID-19. The district has nearly 64,000 students.