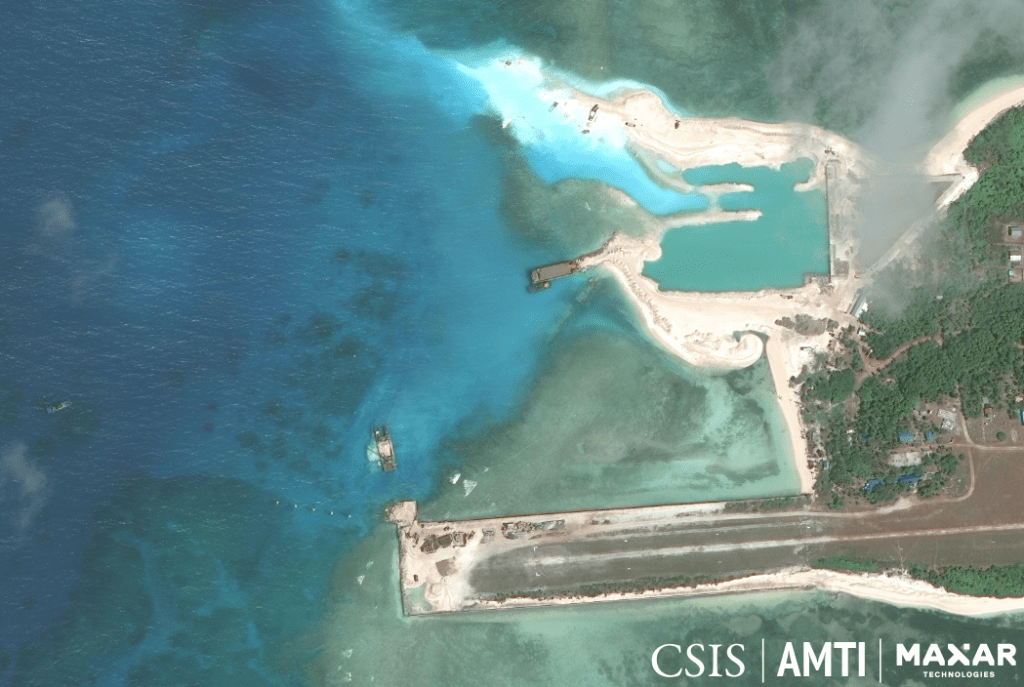 Asia Maritime Transparency Initiative (AMTI) said in a new report on Friday (March 6) that the construction of a beaching ramp and sheltered port appeared to have made significant progress.

“Most of the dredging to the north is complete and it seems clear that this area is being turned into a small harbor,” it said.

The infrastructure was expected to make the resupply of construction materials for other facilities and the repair of the runway easier and also help fishermen improve their quality of life.

This could also allow the Philippine Navy and law enforcement agencies to deploy vessels to the island on rotation, AMTI said.

The Philippine government announced in 2017 that it will start building a beaching ramp on the island to allow bigger ships to bring construction materials for the repair of the 1.3-kilometer unpaved airstrip that was built in the 1970s.

Pag-asa is the largest outpost occupied by the Philippines in the Spratly Islands and the only one with a civilian community.

Runway repairs are continuing slowly, the AMTI said, as indicated by satellite images on Feb. 13.

It remains to be seen how the Chinese maritime militia would respond when the infrastructure on Pag-asa is finished, the think tank said.

The presence of Chinese vessels near Pag-asa was believed to have slowed the upgrade of facilities there, but Philippine officials had said the delays were mainly weather-related.

AMTI said Chinese vessels started operating in large numbers near Pag-asa in December 2018, around the same time that the Philippines started bringing in supplies for runway repairs. Since then, the Chinese vessels have been a constant presence in the area.

AMTI was able to count vessels on 208 out of 459 days that it tracked Chinese vessels through satellite images.

For consistency, the boats counted by AMTI were only within a 32-square-nautical-mile area covering the reefs and sandbars to the west of Pag-asa, where most of the militia fleet usually gathered. Those outside the frame of the images and those sometimes covered by clouds were not counted.

It said the actions of supposedly Chinese fishing boats appeared to be consistent with previously monitored behavior of not actually fishing but probably engaged in surveillance and harassment missions.

The Philippine government had filed several diplomatic protests about the presence of the vessels in 2019.

AMTI is also suspicious of four stationary boats next to the sandbar closest to China-controlled Zamora (Subi) Reef.

The vessels, which did not appear to be trawlers and not exactly similar to those staying near the island, lingered near the reef from Jan. 16 to Feb. 25.

“This appears to be the first time that individual vessels have stayed in one place for so long, though what they were doing for those six weeks is unclear,” the AMTI said.