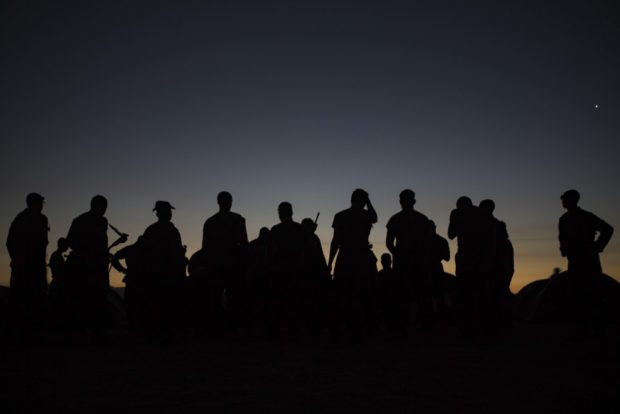 MANILA, Philippines — One of the biggest exercises between Philippine and US troops could take place in the coming months in what could be the last breath of the Visiting Forces Agreement (VFA), the defense pact which governs such exercises but which Philippine President Rodrigo Duterte wanted thrown into trash.

Nearly 11,000 Filipino and American soldiers will take part in this year’s Balikatan, Filipino for shoulder-to-shoulder, the largest of such exercise between the two long-time security allies.

“It will push through as scheduled. That is within the 180-day period so it will continue as scheduled,” he said at a press briefing on Wednesday (March 3).

“There’s no change in the original plan in terms of number of attendees, unless there are last minute changes,” he said partly in Filipino. “Thus far, as we speak, the number of participants is the same,” he said.

Some of the soldiers would start arriving next month to prepare the supplies, medical requirements and other logistics ahead of the arrival of the main contingent in May.

Such large-scale exercises will no longer be possible without the VFA, which governs the stay of US soldiers in the Philippines and serves as foundation of military exercises and humanitarian work.

The Philippine government, upon orders by Duterte, officially sent notice to terminate the VFA to the US government on Feb. 11. Duterte had been ranting against the United States since he entered the presidential race in 2016 and right after assuming office. The termination would take effect in 180 days or six months.

Duterte went ahead with his decision and disregarded the advice of his foreign and security officials to review the agreement instead of scrapping it.

There are 319 joint military exercises between the Philippines and US lined up for 2020, an increase from 281 in 2019. This included the Balikatan, which usually lasts for two weeks.

Arevalo couldn’t say what would happen to the rest of the exercises at the end of the 180-day period for VFA termination.

“Beyond 180 days, we cannot talk about it yet because that is beyond the 180-day period when the VFA is abrogated,” he said.

Joint exercises, like Balikatan, usually focus on the ability of the armed forces of participating nations to operate together.

While equally useful for rescue and disaster response, the defense chief said that trainings are necessary “to hone the jointness in military operations and skills of both sides” when “we are preparing to confront a common adversary.”

Observers said that the VFA gives substance to commitments in the 1951 Mutual Defense Treaty, which binds the Philippines and US to come to each other’s aid if either comes under attack.

Last week, Philippine Ambassador to the United States Jose Manuel “Babe” Romualdez said top diplomats of both countries are working on a new and “improved” deal to replace the VFA. It will be later presented to Duterte. But Palace spokesperson Salvador Panelo said the diplomatic effort does not have Malacanang approval.