MANILA, Philippines — The Philippine government is considering the possibility of expanding its travel ban to Japan, Italy, and Iran due to the rapid rise in novel coronavirus (COVID-19) infections in those countries.

Meanwhile, the Inter-Agency Task Force for the Management of Emerging Infectious Diseases (IATF) issued a resolution on Friday imposing a partial travel ban on Filipinos to South Korea.

The task force continues to monitor the situation in Japan, Italy, and Iran, where more cases have been reported in recent days.

According to reports abroad, there were at least 650 confirmed COVID-19 cases in Italy and 200 in Japan. Iran has an estimated 250 cases, including Masoumeh Ebtekar, the country’s vice president for women and family affairs.

Assistant Health Secretary Maria Rosario Vergeire said a risk assessment on Japan, Italy, and Iran would have to be done, before the task force adds them to the list of countries where travel should be temporarily restricted.

The Department of Health (DOH) said earlier there were at least four areas that it would look into prior to imposing a travel ban. These are: the volume of travelers between the Philippines and the subject country, the burden of infection, the risk of exposure and the stringent protocols that have been put in place.

In an interview with CNN Philippines, Cabinet Secretary Karlo Nograles said, “I don’t want to preempt them (the task force), but obviously the task force is looking at these countries as well.” 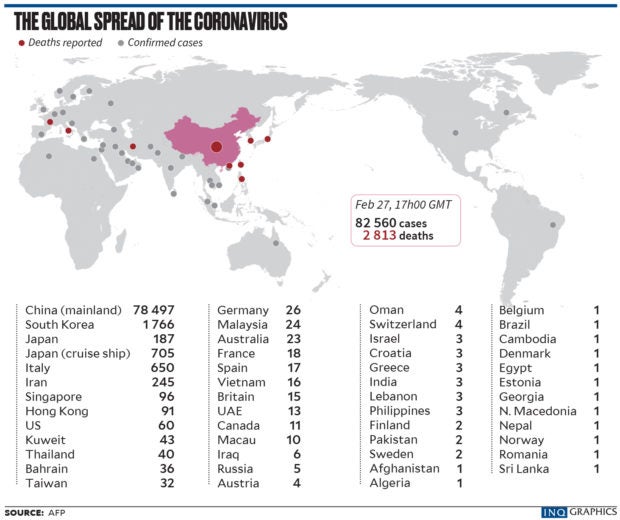 Justice Secretary Menardo Guevarra, a member of the task force, released the final draft of the resolution which temporarily prohibits travel of Filipinos to South Korea as well as the entry to the Philippines of all foreigners coming from the South Korean province of North Gyeongsang, including the city of Daegu and Cheongdo County.

Filipino citizens from South Korea, their foreign spouses and holders of Philippine diplomatic visas are not covered by the ban.

However, Filipinos are not allowed to travel to South Korea except if they are returning or newly hired overseas Filipino workers (OFWs, students, and permanent residents.

The OFWs must additionally sign a declaration stating that they know and understand the risks involved in traveling to South Korea.

Korean Air said Philippine passport holders with plane tickets issued before Feb. 27 with travel dates from Feb. 26 to April 30 may refund their fares without penalty or rebook their flights up to June 30.

In Manila, Saudi Embassy charge d’affaires and deputy head of mission Eisah Abdulrahman Almokli met with Secretary Saidamen Pangarungan of the National Commission on Muslim Filipinos to discuss the travel ban on Filipinos to Saudi Arabia, amid the global threat of COVID-19.

In a statement, the commission quoted the diplomat as saying that the ban is subject to evaluation.

In a Facebook post, the Philippine consulate general in Jeddah said it was informed by Saudi authorities that newly hired workers from other countries who are going to Saudi Arabia for the first time are covered by the ban.

Foreigners holding multiple reentry visit visas who earlier left Saudi Arabia can reenter the kingdom as long as they did not visit any of the countries affected by COVID-19 two weeks before their scheduled return.

Five repatriates from the quarantined cruise ship MV Dia­mond Princess in Japan remain under the DOH’s observation after they showed symptoms of COVID-19, as their quarantine in New Clark City began on Tuesday.

In a press briefing on Friday, Health Secretary Francisco Duque III said the DOH was monitoring a 39-year-old crew member who was taken to a hospital on Wednesday. Two other crew members were tested negative.

“So we leave it at that. I don’t know the operational detail, but I would like to believe that the RITM (Research Institute for Tropical Medicine) knows best what it is doing,” Duque said.

Two other patients were also brought in Friday, but the DOH has yet to provide details on their status.

On Tuesday, the 455 Filipinos who were aboard the MV Dia­mond Princess arrived in Clark to undergo quarantine at Athletes’ Village in New Clark City.

To date, the DOH has recorded 85 Filipinos who have contracted the virus, most of them from the cruise ship, while two cases each were reported in the United Arab Emirates and Hong Kong and a lone case in Singapore. —REPORTS FROM JOVIC YEE, JEROME ANING, AND JULIE M. AURELIO