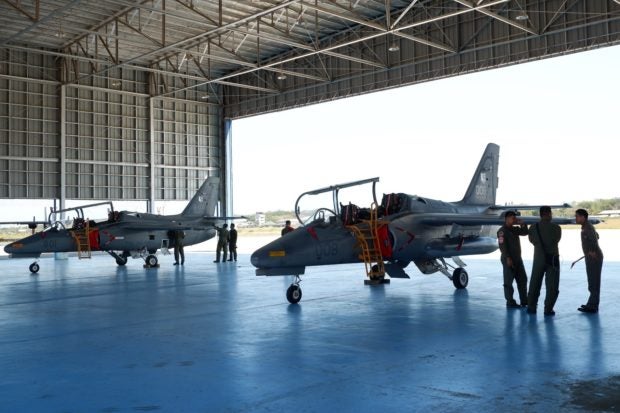 The PAF puts on display three AS-211 trainer jets it was deploying for maritime patrols in the West Philippine Sea. PHOTO FROM TOW FACEBOOK PAGE

MANILA, Philippines —Three trainer AS-211 aircraft were deployed to Palawan on Monday to increase maritime patrols in the West Philippine Sea.

The jet trainers were expected to support the Philippine military’s Western Command in its mission to protect Philippine territorial integrity in its jurisdiction, which included the West Philippine Sea.

The jets would become part of the Tactical Operations Wing (TOW) West at the Antonio Bautista Air Base in Puerto Princesa City, the TOW West said on a Facebook post.

It was not immediately clear if the jets would be for additional deployment or part of rotation.

On its Facebook post, the TOW West said the jets would “enhance operational tempo” of Wescom in securing Philippine territory in the WPS and the Malampaya gas field off Palawan.

The West Philippine Sea is site of territorial claims by China which had been insisting that virtually the entire South China Sea belonged to it.

Beijing’s based its claims on its mythical nine-dash line which had been rejected in 2016 by an international court in a case filed by the Philippines. Vietnam, Taiwan, Malaysia and Brunei also have claims in the area.

But China has been putting its military superiority on display, building artificial islands and military outposts, deploying warships and maritime militias to the contested waterways.