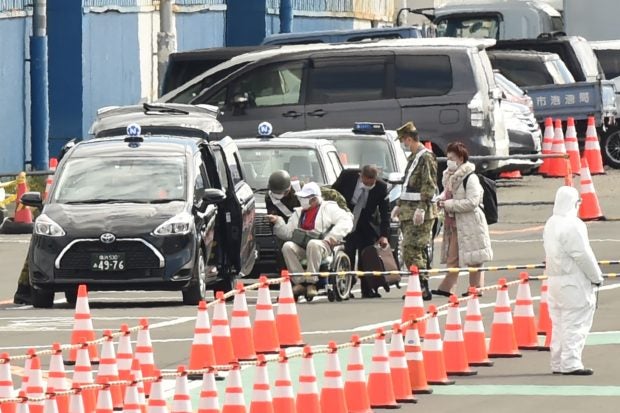 END OF QUARANTINE A passenger in a wheelchair is assisted as he takes a taxi after after disembarking from the Diamond Princess cruise ship—in quarantine due to fears of the new COVID-19 coronavirus—at the Daikoku Pier Cruise Terminal in Yokohama, Japan. Relieved passengers began leaving the vessel on Wednesday after testing negative for the disease that has now claimed more than 2,000 lives in China. —AFP

MANILA, Philippines — Foreign Secretary Teodoro Locsin Jr. ordered the immediate repatriation of more than 500 Filipinos on the cruise ship Diamond Princess as the two-week quarantine of the vessel off Yokohama, Japan, ended on Wednesday.

“I have ordered our Tokyo Embassy to immediately repatriate our people [on] the Diamond Princess cruise ship in Yokohama, Japan. It’s our duty to take care [of] our overseas Filipinos wherever they are,” Locsin tweeted. “I want them home now!”

Duque clarified though that the tentative March 5 repatriation date was relayed to him by Foreign Undersecretary Brigido Dulay during the last meeting of the Interagency Task Force for the Management of Emerging Infectious Diseases.

More than 100 decide to stay

Duque said more than 100 Filipinos, all members of the ship’s crew, had refused to be repatriated because they did not want to lose their jobs on the vessel.

The Diamond Princess went into quarantine off Yokohama on Feb. 5 after it emerged that a former passenger who got off the ship in Hong Kong had tested positive for the new coronavirus that was spreading from China.

Within days, dozens of people on board were diagnosed with the new coronavirus, and by Tuesday, 542 cases were reported.

Forty-one Filipinos, all crew members, were infected with the new coronavirus while in quarantine, including six who tested positive on Tuesday, the last day of the vessel’s quarantine, according to the Philippine Embassy in Tokyo.

One of the 41, a male crew member who was among the first confirmed cases on the ship and was admitted to a hospital on Feb. 5, had been “successfully treated” and was expected to be discharged on Wednesday, the embassy said in a statement.

The other 40 remained in hospitals in and around metropolitan Tokyo, it said.

The embassy said it was “finalizing the details, logistics and schedule of the repatriation” of the ship’s Filipino crew and passengers.

There were 538 Filipinos—531 crew members and seven passengers—among the original 3,711 people on the Dia­mond Princess. The United States evacuated more than 300 Americans from the ship, with Australia, Britain, Canada and Hong Kong planning to evacuate their citizens from the vessel as the end of the quarantine neared.

Around 500 people were expected to disembark starting Wednesday, an official of Japan’s Ministry of Health said, with the entire process completed by Friday.

Public broadcaster NHK said that those who had roomed with passengers who tested positive would have to stay on the ship another 14 days from the time the infected roommate left.

Crew members, who have been sharing rooms, would have to separate rooms and undergo health checks, Chief Cabinet Secretary Yoshihide Suga told a news conference on Wednesday.

“All Filipino crew and passengers who are cleared for disembarkation from the vessel will be assisted by the embassy and (the ship’s operator) Princess Cruises, and will be repatriated back to the Philippines at the soonest possible time,” the Philippine Embassy said.

The 40 Filipinos who were still in hospitals “will be repatriated as soon as these hospitals grant them medical clearance,” it added.

Earlier, the Department of Foreign Affairs (DFA) said the repatriation would be done volun­tarily.

In interview on Radyo Inquirer on Wednesday, Duque said more than 100 Filipino crew members decided not to be repatriated because they could lose their jobs on the ship if they would be quarantined back home for two weeks.

He said the government had set the repatriation on March 5, or two weeks after the end of the ship’s quarantine. He did not say where the Filipinos willing to be repatriated would stay while waiting to be flown home.

It was also unclear on Wednesday where the government planned to bring the Filipinos when they arrived in the Philippines.

Thirty Filipinos who were evacuated on Feb. 9 from Wuhan, epicenter of the new coronavirus epidemic, and about 12 other Filipinos who helped to bring them home were quarantined at Athletes’ Village in Capas, Tarlac province. They were reported as asymptomatic on Wednesday, four days after their quarantine, although one was in hospital for high blood pressure.

According to Assistant Health Secretary Maria Rosario Vergeire, the Inter-Agency Task Force for the Management of Emerging Infectious Diseases headed by the Department of Health (DOH) had yet to produce a final plan for the quarantine of the repatriates.

Also on Wednesday, the DFA said the Filipino maid in Hong Kong who was reported to have tested positive for the new virus was in hospital but showing no symptoms.

News reports in Hong Kong said the 32-year-old maid had cough and fever on Feb. 2 and self-medicated. Her employer reportedly tested positive for the virus a week later.

On Tuesday, the maid was reported to have tested positive but the DFA did not confirm the report until Wednesday.

The DFA said the Philippine Consulate General in Hong Kong reported the maid to be in hospital “undergoing tests and observation.”

“[She] is said to be asymptomatic and will be discharged if further tests come out negative,” the DFA said, quoting the consulate general.

—With reports from Jovic Yee and the wires

Metal, believed to be from commercial plane, found on Eastern Samar beach