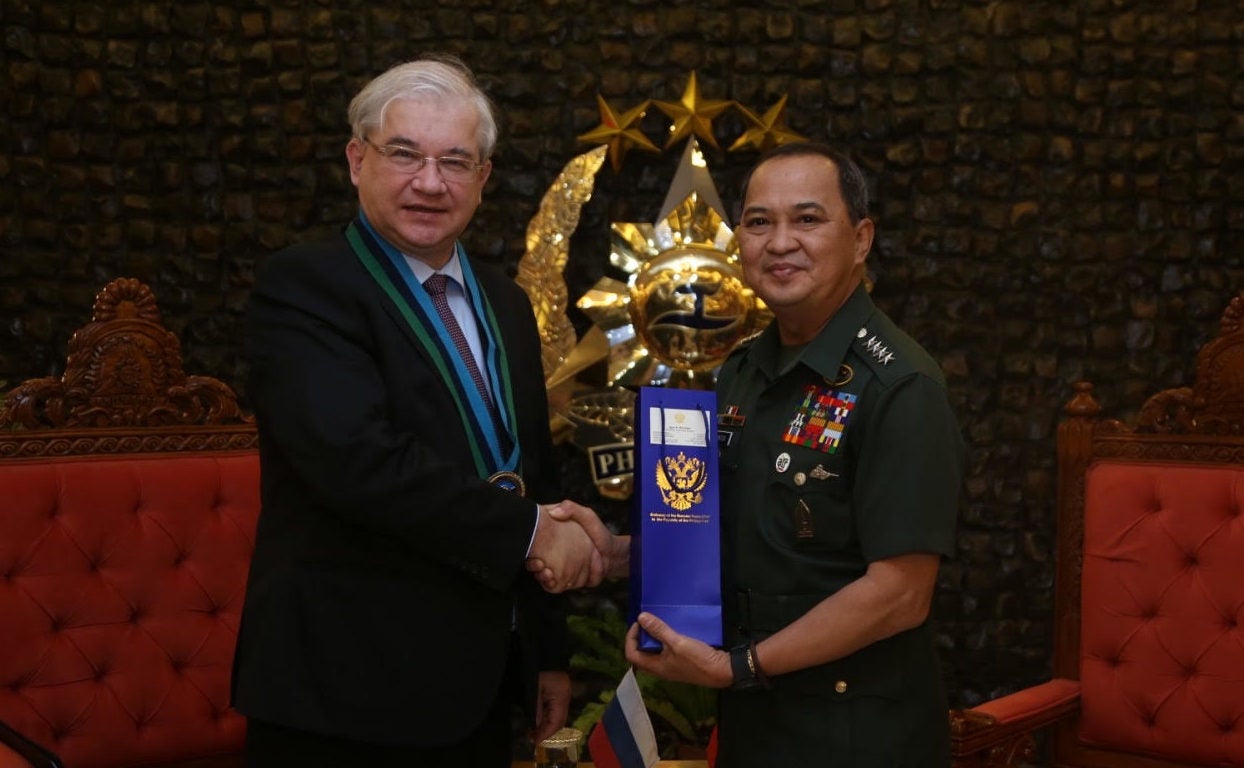 The Ambassador of the Russian Federation to the Philippines, his Excellency Igor Khovaev, meets with Armed Forces of the Philippines chief Gen. Felimon Santos Jr. on Monday (Feb. 18) at Camp Aguinaldo. / AFP PAO

MANILA, Philippines — The Russian government on Tuesday (Feb. 18) sought to distance itself from the looming termination of a key defense pact between the Philippines and United States, saying its ambassador’s visit to the highest ranking military officer of the Philippine government was in connection with previous discussions between Philippine President Rodrigo Duterte and Russian President Vladimir Putin for bilateral cooperation that included military ties.

Russian Ambassador to the Philippines Igor Khovaev on Monday (Feb. 17) paid a courtesy call on recently-appointed Philippine Armed Forces Chief Felimon Santos Jr. in a visit that the Russian Embassy, on a Facebook post, said was “focused on the development of military-technical cooperation” between the Philippines and Russia.

Natalia Linovitskaya, Russian Embassy press secretary, said the visit, however, is not related to Duterte’s push to junk the Visiting Forces Agreement (VFA) between the Philippines and US.

The courtesy call by Khovaev on Santos, according to Linovitskaya, “has nothing to do with the known recent event in US-Philippine cooperation.”

“We are just doing our work on the way to develop bilateral cooperation between our nations, including military cooperation,” she said in a statement of the Russian Embassy.

Khovaev’s visit to Santos at the AFP headquarters in Camp Aguinaldo came a few days after the AFP started to gear up for the termination of the VFA, which several senators are contesting.

Linovitskaya said the visit was only part of the implementation of agreements reached in 2019 when Duterte visited Russia and met Putin.

“Current status and prospects of the Russian-Philippines military cooperation were among the issues discussed during the bilateral meeting of President Putin and President Duterte last October. Now we are just implementing the agreements reached last year,” she said.

“Russia and the Philippines have their own, absolutely independent course in the bilateral cooperation in military and military-technical spheres. We never been depended on the third party,” she added.

Duterte last week ordered the sending of the notice of termination of the VFA to the US Embassy in Manila. It was expected to take effect after 180 days.

The VFA, ratified by the Philippine Senate in 1999, governs the conduct of visiting American soldiers and serves as the foundation for military exercises and humanitarian work.

Critics said the move was just part of Duterte’s original plan to pivot to China and Russia as he had been promising since 2016.