PH to review ban on travel to HK 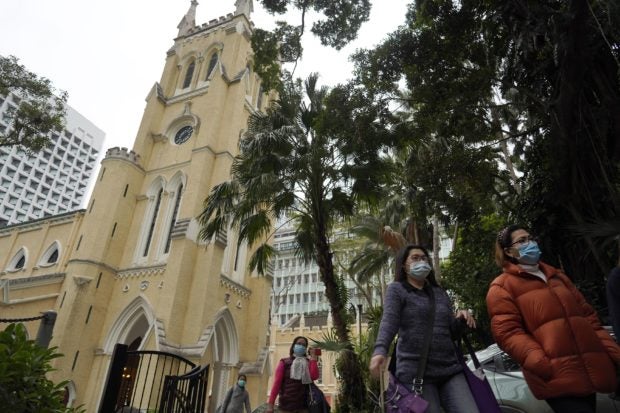 CHURCH SERVICES SUSPENDED People emerge from St. John’s Cathedral in Hong Kong after hearing Mass in this photo taken on Feb. 9. The Catholic Diocese of Hong Kong has suspended church services up to Feb. 28 to help prevent the spread of the new coronavirus. The Archdiocese of Singapore has also suspended church services to help battle the virus. —AP

MANILA, Philippines — The Philippines will review by the end of February its ban on all travel to and from Hong Kong, which it imposed on Feb. 2 after a Chinese national died in a Manila hospital, the first overseas death from a new coronavirus epidemic sweeping China and fast spreading to other countries.Foreign Secretary Teodoro Locsin Jr. said he had assured Hong Kong authorities who had asked that Filipino workers be allowed to return to the semiautonomous Chinese city that the ban would be reviewed.

“Time to allow our domestic workers to return to their employers in Hong Kong. Eagerly awaited. HK has better facilities to contain virus,” Locsin tweeted on Saturday.

“I promised that in 2 weeks we will reconsider,” he added.

The Duterte administration clamped the restriction on China and its two administrative regions—Hong Kong and Macau—to prevent the spread of the new coronavirus to the Philippines after the Department of Health (DOH) announced the death of a 44-year-old Chinese man who had traveled to the Philippines from Wuhan, capital city of the central Chinese province of Hubei that is the epicenter of the epidemic.

The man was a companion of the Philippines’ first confirmed case of the virus, a 38-year-old woman from Wuhan, who had since recovered and returned to China.

On Feb. 10, the government expanded the ban to include Taiwan, an assessment for which the World Health Organization (WHO) had clubbed with that for China.

Manila’s move infuriated Taipei, which argued that Taiwan was separately governed from China and that it had only 18 cases of the virus that it could ably handle at its modern medical centers.

Taipei demanded Manila lift the ban immediately and threatened countermeasures if the Duterte administration did not remove the restrictions.

Taiwan did not specify the retaliatory actions it planned, but the Philippine labor export sector feared the countermeasures would include a halt to hiring Filipinos for jobs in Taiwan and revocation of the visa-free privilege granted to Filipinos for travel to the island.

More than 115,000 Filipinos work in Taiwan, mostly as factory hands and as maids. Many were vacationing in the Philippines when the government imposed the ban and many other Filipinos were stranded in Taiwan after flights to and from the island were canceled.

The outcry that followed, including from lawmakers, forced the government to lift the ban on Friday. It also announced that restrictions involving “other jurisdictions”—meaning Hong Kong and Macau—would also be reviewed after those regions had submitted information on how they were countering the spread of the new virus.

More than 230,000 Filipinos work in Hong Kong, which as of Feb. 15 had 56 confirmed cases of the virus, including one death.

Locsin has openly opposed the ban on Filipinos’ travel to and from Hong Kong, which also covers all foreign nationals who have traveled to China and Macau during the last 14 days.

He said Filipinos in Hong Kong could not get other jobs if they failed to return to their employers in the former British colony. If they got sick, he said, they would be better taken care of in Hong Kong than in their own country.

The Department of Foreign Affairs had reported two Filipino maids in Hong Kong were under observation for the virus. One, whose employer had died of the pneumonia-like ailment, had been given a clean bill of health, while the other remained in quarantine.

To help contain the epidemic, the Catholic Diocese of Hong Kong has suspended church services from Feb. 15 to 28. The diocese and the Catholic Archdiocese of Singapore have advised their followers in the two jurisdictions to follow online broadcasts of Masses instead.

Balanga Bishop Ruperto Santos, vice chair of the Catholic Bishops’ Conference of the Philippines’ Episcopal Commission on Migrants and Itinerant People, on Sunday advised the Filipinos in Hong Kong and Singapore to pray at home during the suspension, and pray for the eradication of the virus, the development of a cure, and the healing of the thousands who had been infected.

He also said that even without Masses, Filipinos in Hong Kong and Singapore should still fast and abstain on Feb. 26—Ash Wednesday, the start of Lent.

The new virus had killed 1,665 and infected more than 68,000 in China as of Sunday. It had spread to more than two dozen countries and killed four: one each in the Philippines, Hong Kong, Japan and France—all Chinese travelers to those countries.

In the Philippines, health authorities have been observing 498 people for infection. Of those, according to the DOH, 159 remain in hospitals and 336 have been discharged after testing negative for the virus.

The WHO has issued tips for coping with stress during the outbreak.

“It is normal to feel sad, stressed, confused, scared, or angry during a crisis. Talking to people you trust can help. Contact your friends and families,” the WHO said in an advisory.

It encouraged people to draw on skills they had used in fighting adversities in the past.

“Use those skills to help you manage your emotions during the challenging time of this outbreak,” the WHO said.

It also urged people to maintain a healthy lifestyle, including proper diet, sleep, exercise and contact with loved ones.

The WHO also reminded people to always look for a credible news source to get correct information about the outbreak, like the WHO website and local and state public health agencies.—With a report from Tina G. Santos

Read Next
SC should have final say on VFA – Lacson
EDITORS' PICK
Anti-Terrorism Council’s first move: Make a list
Critics ask SC for TRO vs anti-terrorism law, citing ‘repugnant’ provisions
EuroMillions Superdraw: A lottery draw unlike any other is coming to the Philippines
Water remains our saving grace right now
DepEd not ready for ‘new normal’ classes – solons
Smart releases Hyun Bin’s second TVC
MOST READ
Lacson calls report ‘malicious,’ but journalist says she tried to contact him
NAIA Terminal 3 to open for international flights starting July 8
2 carriers in South China Sea, US bares
As Ringo Starr turns 80, he talks about his life, Beatles journey, including that unfortunate Manila experience
Don't miss out on the latest news and information.