Ending VFA OK with Trump: ‘It will save a lot of money’ | Global News
Close
menu
search

Ending VFA OK with Trump: ‘It will save a lot of money’ 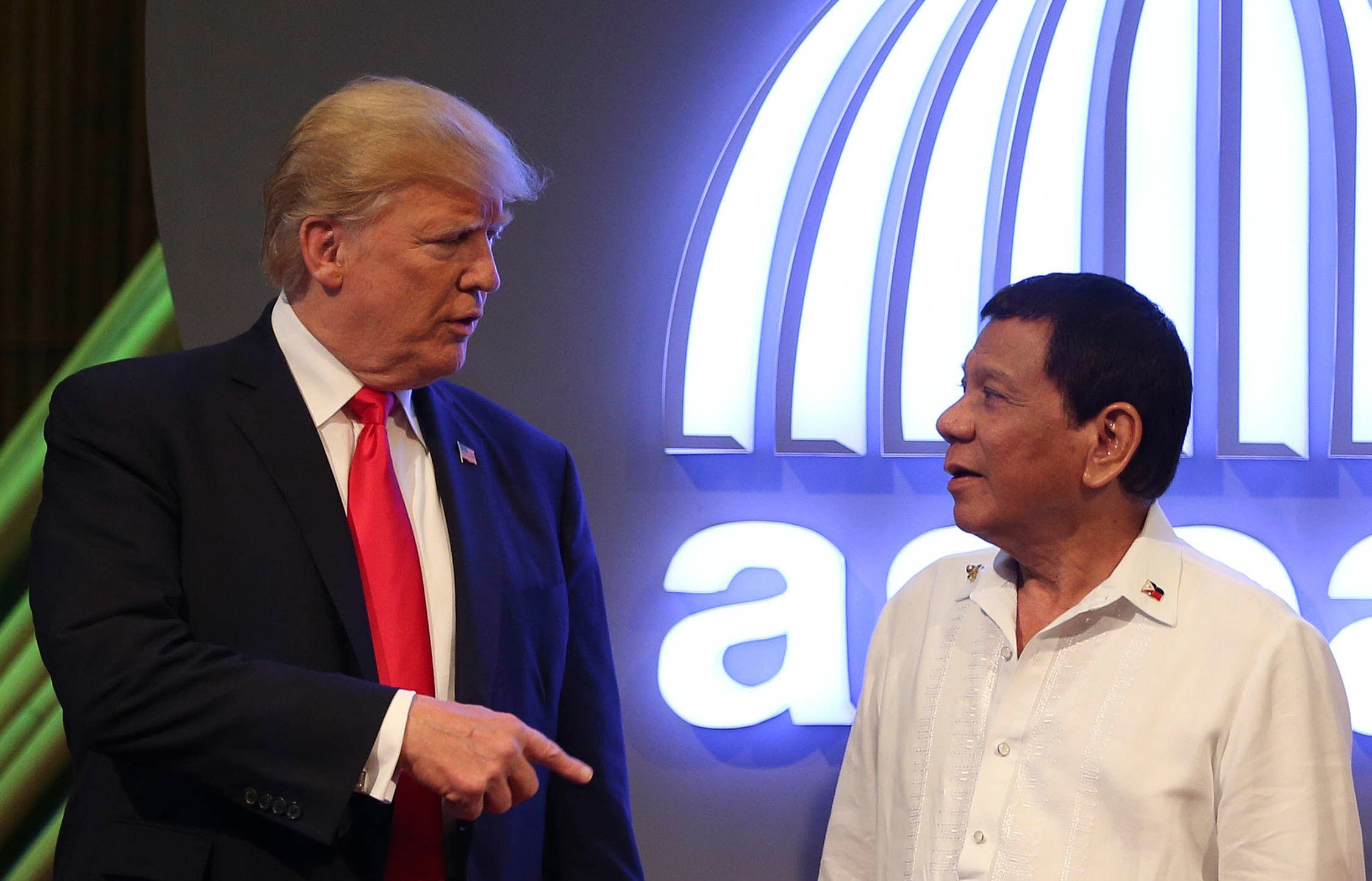 VERY GOOD US President Donald Trump says he has “very good” relations with President Rodrigo Duterte, the two seen together in this Nov. 13, 2017, photo during the 31st Asean Summit in Manila. The US leader said he didn’t mind that Mr. Duterte scrapped the 1999 Visiting Forces Agreement because it would save money for his government. —INQUIRER FILE PHOTO

US President Donald Trump said he did not mind President Rodrigo Duterte’s decision to scrap the Visiting Forces Agreement (VFA), but Sen. Panfilo Lacson and the top American military commander in Asia-Pacific warned on Thursday that the loss of the accord would undermine the counterterrorism efforts of the Philippines.

“I don’t really mind if they would like to do that, it will save a lot of money,” Trump told reporters at the White House on Wednesday. “My views are different from others.”

He said he had “a very good” relationship with Mr. Duterte. “We’ll see what happens.”

Lacson said the abrogation of the VFA was “not the smartest move of the President to expose ourselves naked first before looking for other options for cover.”

The Philippines is a resilient country and will survive by adapting to the absence of the VFA, said the former national police chief.

“But in the meantime, we remain exposed to terrorist threats, both domestic and foreign, not to mention the continuing security threat in the West Philippine Sea posed by China, and even the need for timely humanitarian response and assistance that the US is capable of deploying during disasters, natural or man-made,” Lacson said.

The Philippines on Tuesday served its notice of termination of the VFA to the US Embassy in Manila. The termination will take effect after a 180-day withdrawal period.

The agreement provides the legal basis for the presence of US troops in the Philippines to conduct bilateral exercises with Filipino soldiers. It was ratified by the Senate in 1999, eight years after senators refused to extend the lease on the US military bases.

Adm. Philip Davidson, head of the US Indo-Pacific Command, said Mr. Duterte’s decision to scrap the accord would hamper military operations in Mindanao, where separatist and Islamist violence has killed some 100,000 people.

Davidson said he hoped that “diplomatic efforts” by the two sides during the 180-day period would lead to a “successful outcome.”

US Defense Secretary Mark Esper earlier said Mr. Duterte made an “unfortunate” decision and that the President moved in the “wrong direction” as Washington, Manila and their allies were pressing China to abide by “international rules” in the South China Sea.

Reacting to Trump’s statement, presidential spokesperson Salvador Panelo said: “Words are less loud than actions … Let’s see how his words will match the actions of the US government.”

Lacson said the abrogation of the VFA would also affect the maintenance of the country’s military equipment, including aircraft provided by Washington.

He said the United States had extended $900 million worth of defense and security assistance to the Philippines since 2016, part of the $1.3-billion financial package that the country received since 1998.

“Definitely, our military establishment will feel this gap, not to mention the technical intelligence support that they have been providing our ground troops in the country’s fight against domestic and foreign terrorism,” he said.

Panelo on Wednesday said the President made “a move in the right direction” to strengthen the country’s military forces without depending on any foreign power, or being a “parasite to another country.”

On Thursday, he said that based on Mr. Duterte’s “body language,” the President might also decide to abrogate other defense and military pacts with Washington, principally the 1951 Mutual Defense Treaty (MDT) and the 2014 Enhanced Defense Cooperation Agreement (Edca).

“To be consistent with his stand, then all treaties must go, by the tone of his body language. If you say we have to stand on our own, it means we’ll have to strengthen our own resources, and not lean on other countries,” he said. He added, however, that he had not spoken with the President about the fate of the other agreements.

Senate President Vicente Sotto III on Thursday firmed up his plan to question in the Supreme Court the Senate’s exclusion from making the decision to terminate the VFA.

In a radio interview, Sotto said that according to a study he had directed, Senate concurrence was needed to abrogate treaties since international agreements required the senators’ approval for them to take effect in the first place.

Sen. Imee Marcos said she would rather not bring the issue to the Supreme Court “because it would continue to polarize an already divided public opinion.”

He noted that the military agreements with the United States failed to deter China from converting the waters and shoals in the West Philippine Sea into its military outposts.

Defense Secretary Delfin Lorenzana said the US-Philippine Balikatan military exercises would still be held as scheduled on May 3-May 15.

“Our American counterparts may opt to discontinue the scheduled exercises before the 180 days are up,” he said. “Once the termination is final, we will cease to have exercises with them.”

Foreign Secretary Teodoro Locsin Jr. told critics to “stop whining” about the loss of the VFA.

“We look weak if not fairy-like to potential aggressors in Southeast Asia,” he said on Twitter on Thursday.

“Our boys have fought our wars with not much in their hands; let our officials honor them by talking tough on their behalf against potential aggressors not former allies,” he added.

He said the Philippines would no longer enter into such agreements with other countries, especially “potential aggressors.”

“Anyone suggests alternative VFAs with potential aggressors gets slapped by me. US will never be a threat,” he added.

Less than a week earlier, he told senators that “the continuance of the [VFA] is deemed to be more beneficial to the Philippines, compared to any benefits were it to be terminated.” —WITH REPORTS FROM MELVIN GASCON, DONA Z. PAZZIBUGAN, JEANNETTE I. ANDRADE AND AFP