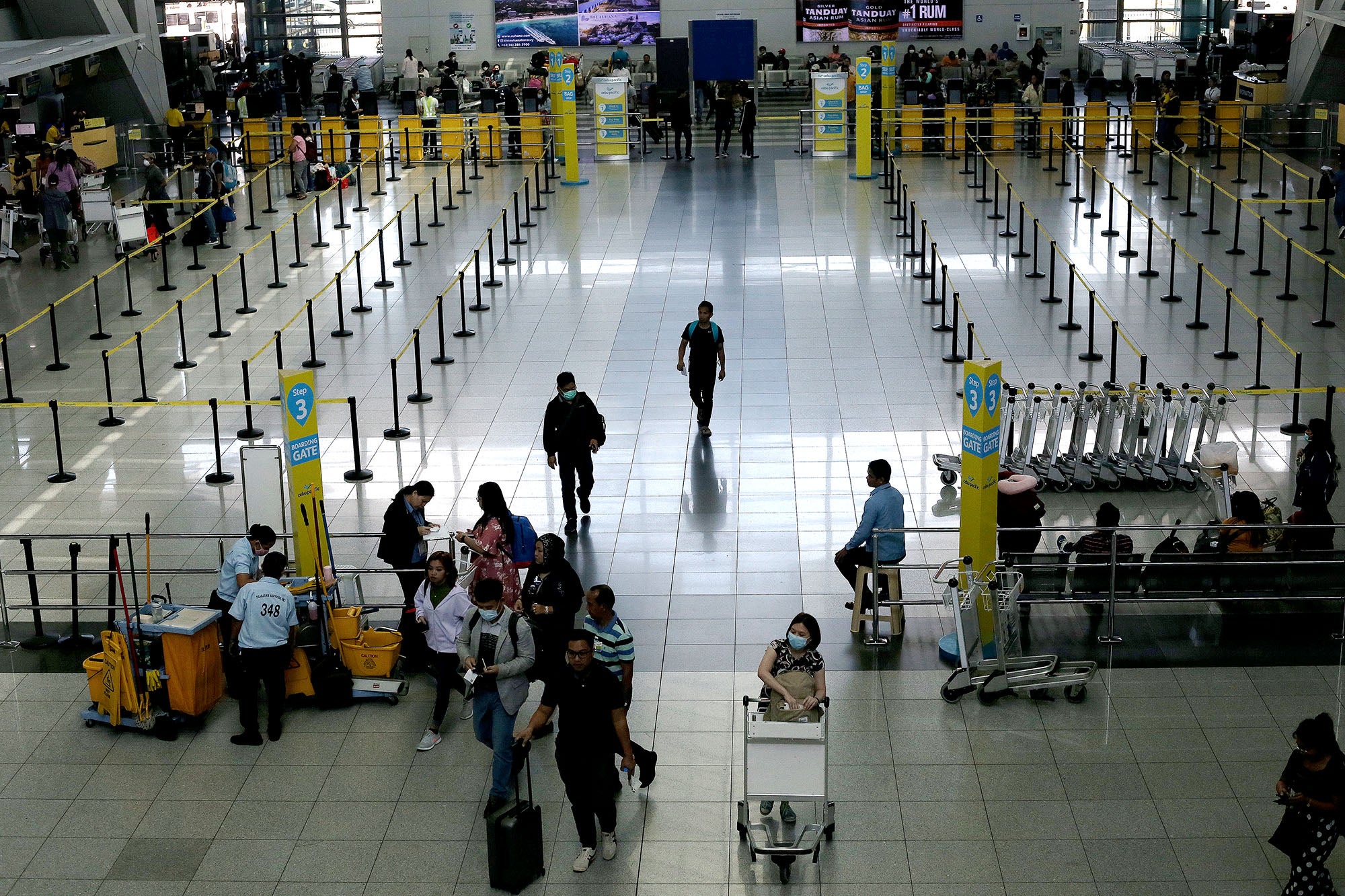 QUIET TERMINAL Few travelers are seen at Terminal 2 of Ninoy Aquino International Airport on Wednesday following the cancellation of flights to and from Taiwan due to the expansion of the government’s ban on all travel to and from China, Hong Kong and Macau to include the island in a bid to prevent a new coronavirus epidemic in China from reaching the Philippines. The Department of Tourism says the ban will cost the Philippines P42.9 billion in lost tourist receipts. —RICHARD A. REYES

MANILA, Philippines —Taiwan asked the Philippines on Wednesday to immediately lift its travel ban, complaining that it was “wrongly included” in the order prohibiting all travel from China, Hong Kong and Macau due to a new coronavirus epidemic spreading from the mainland.

In a statement released on Wednesday, the Taipei Economic and Cultural Office (Teco), Taiwan’s de facto embassy in Manila, said the Philippines “should not be misled” by the “wrong information” of the World Health Organization (WHO) to consider Taiwan as part of the People’s Republic of China (PRC)—the official name of China.

“The Republic of China (Taiwan) is a sovereign and independent state… In fact, Taiwan is not, nor has it ever been, part of the PRC,”  Teco said.

It added that the Philippines is the only country in Asia to ban travel to and from Taiwan.

“We urge the Philippine government to immediately correct its decision on Taiwan and remove Taiwan from the travel ban,” it said.

On Feb. 2, the government banned all travel to and from China and its two administrative regions — Hong Kong and Macau — to keep the new coronavirus out of the Philippines.

Late Monday, however, the Department of Health (DOH) said the travel ban covered Taiwan, following the Philippines’ One China policy, which recognizes China, which in turn insists Taiwan is its province.

The Bureau of Immigration immediately enforced the expanded travel ban, forcing Philippine airlines to cancel flights to Taiwan starting Tuesday. As a result, hundreds of travelers to and from Taiwan were stranded at the airports in Manila and Taipei.

In the Philippines, most hurt by the expansion of the China travel ban were Filipino migrant workers who failed to return to their jobs or take new jobs in Taiwan.

Labor groups denounced the decision as unfair to the migrant workers. The DOH, as of Wednesday, appeared to be at a loss to explain the restrictions imposed on Taiwan.

At a news briefing on Wednesday, Health Undersecretary Eric Domingo declined to elaborate on the considerations that led to the ban, saying the matter was for the Inter-Agency Task Force for the Management of Emerging Infectious Diseases to discuss.

Asked if the Philippines was inclined to impose a similar ban on neighboring Singapore and Thailand, which have more confirmed cases of the virus than Taiwan, Domingo again referred to the task force.

“The [task force], when they meet regularly, they discuss this and they come up with guidelines for us to implement. I do not know where the discussion is going right now because I was not at the [last] meeting. But the assurance is that they will continue monitoring and evaluating,” Domingo said.

Earlier, Domingo said that due to “confusion among all agencies,” Taiwan was not included in the China travel ban implemented on Feb. 2. He said Taiwan’s inclusion later was based on the Philippines’ One China policy.

Presidential spokesperson Salvador Panelo supported Domingo, saying that apart from the One China policy, the inclusion of Taiwan in the ban was based on recommendations made by the WHO.

But the WHO maintained on Wednesday that it did not recommend to any government the imposition of a travel ban on China even though the epidemic was spreading fast.

“WHO’s position has always been that there be no travel restriction,” the agency’s country representative Rabindra Abeyasinghe told reporters.

“We have observed in previous outbreaks that travel restrictions cause more social and economic disruption and less effective as a means of controlling outbreaks,” he added.

Panelo on Wednesday said he would bring the objections to the ban to the attention of President Duterte.

He said the administration would consider Taiwan’s statement it was not debilitated by the new virus.

But it would also take into account the protection of the Filipinos’ health, he added.

“The reason why we’re effecting the travel ban is we’re trying to protect our countrymen from being infected. So if there is no infection there, we will give it to the President,” Panelo said.

In the House of Representatives, Tourism Secretary Bernadette Romulo-Puyat told the tourism and economic affairs committee on Wednesday that the Philippines would lose P42.9 billion in estimated tourist receipts as a result of the ban on travel from China, Hong Kong, Macau and Taiwan.

The Chinese are the top tourist arrivals in the Philippines, followed by the South Koreans.

Puyat said the viral outbreak “has already resulted in cancellations and corresponding decrease in tourist traffic to the Philippines and a number of countries around the globe.”

A computation by the Department of Tourism (DOT) shows that lost tourist receipts would amount to P16.8 billion in February, P14.11 billion in March, and P11.99 billion in April.

The computation is based on the compounded average growth rate of tourist arrivals from 2017 to 2019, according to Puyat.

Overall, however, the projected impact of the ban on the economy for the whole year is about a 0.3 percent reduction in the gross domestic product, according to the National Economic and Development Authority (Neda).

Neda Undersecretary Rosemarie Edillon told the committee that it helped that the Philippines “is not that dependent on tourism” and “is in some ways insulated” from the brunt of the epidemic.

Puyat said the DOT was working with the travel trade to cushion the impact of the outbreak on the tourism industry.

Read Next
US: Wrong move to end VFA amid China buildup
EDITORS' PICK
Egg prices rise due to bird flu, increased holiday demand | #INQToday
18,529 out of 24,903 pass nursing board exam
The Best Tech Gifts For The 2022 Holidays
Marcos urges Filipinos to be like Bonifacio: honest, patriotic
The vivo Y16 makes the season of giving more thoughtful for the whole family
House energy committee chair Arroyo bats for cheap electricity
MOST READ
Mel Tiangco on co-anchor Mike Enriquez’s condition, ‘rivalry’ with Korina Sanchez
LOOK: Vina Morales goes to Boracay with mystery man
Marcos urges Filipinos to be like Bonifacio: honest, patriotic
Ref admits to cheating: How Manny Pacquiao snagged the win
Don't miss out on the latest news and information.