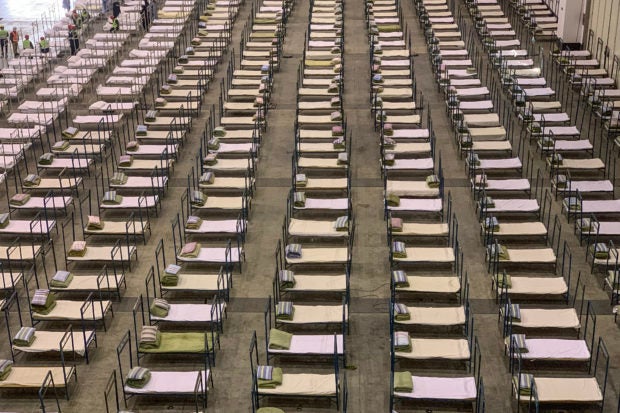 Workers set up beds at an exhibition center that was converted into a hospital in Wuhan in China’s central Hubei province on February 4, 2020. (STR/AFP)

MANILA, Philippines — Filipinos in China’s virus zone who are showing flu-like symptoms will not be flown back to the Philippines amid an outbreak of a disease that has infected more than 34,800 people globally, officials said Saturday.

“Yes, exactly,” Department of Health Sec. Francisco Duque III told INQUIRER.net in a text message when asked to confirm if those exhibiting signs of respiratory illness will not be evacuated from China.

“They will be transported to designated hospitals for further evaluation and testing, and if negative may be sent home but under close monitoring,” Duque added.

There are more than 12,000 Filipinos in mainland China and about 300 are working in Hubei, a central Chinese province that has been placed under an unprecedented lockdown since January 23 in a bid to stop the spread of the 2019 novel coronavirus.

In an earlier interview over radio station DZMM, Interior and Local Government Undersecretary Martin Dino bared the plan as he tried to calm the nerves of local officials of Capas, Tarlac where the evacuated Filipinos will be sent for a 14-day quarantine.

(About those who will evacuated from China, what is your assurance? When they have symptoms, with the team who came to China,  they will be left behind in China. Those who will be brought here are those without symptoms.)

The 525-bedroom Athletes’ Village in New Clark City will serve as the quarantine site of Filipinos who will be evacuated from Wuhan,  the epicenter of the novel coronavirus outbreak. As of Saturday, China’s virus death toll rose to 722.

The Department of Foreign Affairs is currently preparing the repatriation from Wuhan of 45 Filipinos who responded to the government’s call to evacuate. They are expected to arrive at the Clark International Airport on Sunday morning.

Foreign Affairs Undersecretary Brigido Dulay earlier explained that permits and clearances should be secured first from China before repatriating the Filipinos.

The Phillippines has recorded three confirmed cases of infection, all involving Chinese nationals from Wuhan.