MANILA, Philippines — The Filipino crew member of a Japanese cruise ship infected by the 2019 novel coronavirus (2019-nCoV) is responding “positively” to treatment, an official from the Philippine Embassy in Tokyo said.

Robespierre Bolivar, the embassy’s deputy chief of mission, on Friday said the Filipino has already been moved out of the ship currently docked off a port in Yokohama and transferred to a hospital. 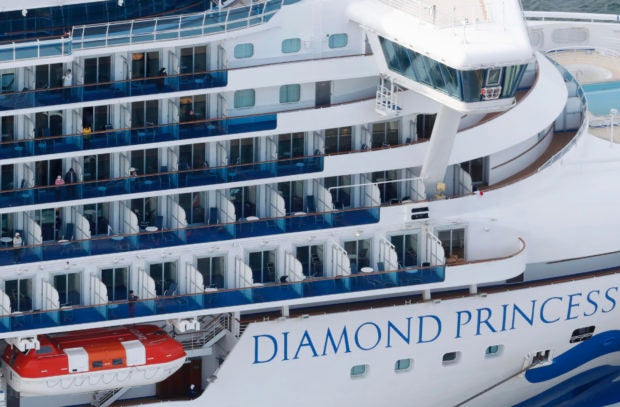 Some passengers are seen on the Diamond Princess as the cruise ship is anchored at Yokohama Port for supplies replenished in Yokohama, south of Tokyo, Thursday, Feb. 6, 2020. The 3,700 people on board faced a two-week quarantine in their cabins. Health workers said 10 more people from the Diamond Princess were confirmed sickened with the virus, in addition to 10 others who tested positive on Wednesday. The 10 will be dropped off as the ship docks and transferred to nearby hospitals for further test and treatment. (Kenzaburo Fukuhara/Kyodo News via AP)

(The Filipino crew member has been moved out of the ship and transferred to a hospital by Japanese authorities. He is undergoing tests and treatment. We are getting updates about his condition daily.)

(Right now, he seems to be responding to the treatment positively).

The Filipino crew member was among the first 10 people who tested positive for the 2019-nCoV.

The Department of Foreign Affairs (DFA) earlier said that there are 538 Filipinos on board the ship, mostly crew members.

Bolivar said the the Filipinos and others aboard the ship are still under quarantine.

(They are under a 14-day quarantine. They are not allowed to leave their quarters but Japanese authorities regularly bring food and other basic needs to them).

(The Filipinos aboard the ship also have contact with the embassy, so if they have concerns, they let us know and we are the ones who inform the Japanese government so their concerns can be addressed).

Bolivar, meanwhile, said the embassy has not yet received reports of any cases of the virus among the Filipino community in Japan.

There are currently 300,000 Filipinos across Japan, he said.

(We have not yet received reports that any land-based Filipinos here are affected).