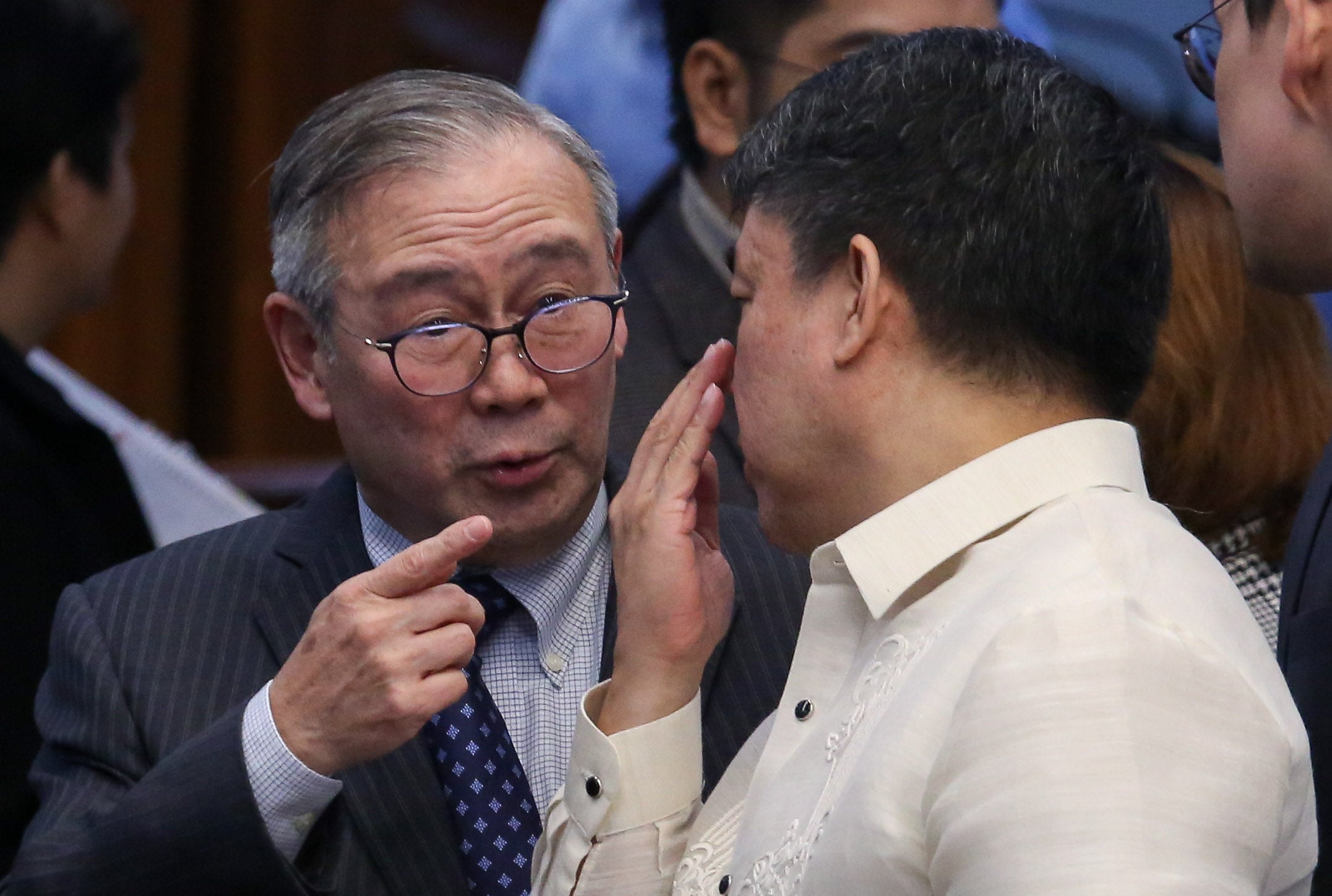 Foreign Secretary Teodoro Locsin Jr. on Thursday said the Philippines stood to lose more if it terminated the Visiting Forces Agreement (VFA) with the United States, but he favored a “vigorous review” of the accord to resolve sovereignty issues between the two countries.

Locsin, who had praised President Duterte’s threat to end the VFA as a “good move,” said the Department of Foreign Affairs (DFA) had not sent the notice of termination to Washington, and would only do so upon the direct, personal order of the Chief Executive.

“The DFA at this point proffers no preference for any of these options, but at this point I think a review, a vigorous review of the Visiting Forces Agreement is called for,” Locsin told senators.

Before leaving on a trip to Washington two weeks ago, Locsin said on Twitter that he had asked Defense Secretary Delfin Lorenzana to “start the process of terminating the USVFA.”

The 1999 accord governs the conduct of US troops who take part in military exercises in the Philippines.

The Senate is looking into the effects of abrogating the more than two-decade-old accord, which Mr. Duterte ordered after railing at Washington for canceling the US visa of Sen. Ronald dela Rosa, the retired national police chief who was the executioner of his brutal war on drugs.

Malacañang later said the visa cancellation was just the “last straw” for Mr. Duterte and that the termination of the VFA was based on other “disrespectful acts” by the Americans.

“While the Philippines has the prerogative to terminate the VFA anytime, the continuance of the agreement is deemed to be more beneficial to the Philippines compared to any benefits were it to be terminated,” Locsin said.

Ending the agreement would undermine Philippine defense and security arrangements and the overall bilateral relationship between the two treaty allies, he said.

“Our contribution to regional defense is anchored on our military alliance with the world’s last superpower,” he added.

But Locsin said there were “irritants” that needed to be resolved, and the DFA had taken steps to clarify certain items in the agreement to avoid problems in implementing it.

“I don’t believe because we need them, we should suffer insults to our sovereignty. So we go down and say, ‘This is how angry we are now. Let’s review this in a way that impart the mutual respect that should underpin a mutual defense,’” he said.

He said the VFA was the logical target of retaliation when the Philippine justice system was disrespected, referring to calls from US senators to free Sen. Leila de Lima and drop the charges against one of the President’s most vocal critics.

Such a call demeans the country’s justice system and “insulted the most basic aspect of sovereignty, the monopoly of justice within its territory,” Locsin said.

Locsin enumerated the various benefits of keeping the VFA and the risks in terminating it.

One is that it would ensure the operability of other Philippine-US agreements, such as the Mutual Defense Treaty and the Enhanced Defense Cooperation Agreement (Edca).

The VFA also allows the United States to provide military and defense assistance to the Philippines, and cooperation and joint activities between the armed forces and law enforcement agencies of both countries that enhance the country’s capability to counter national security threats.

The agreement also provides support in dealing with nontraditional threats such as human trafficking, cyberattacks, terrorism and illegal drugs, he said.

Without the VFA, the US may see no need for Edca, which allows it to set up military facilities in the Philippines, Locsin said.

“The Mutual Defense Treaty without the VFA and Edca may be compared to a deflated balloon … more suitable as a shower cap than a prophylactic against foreign aggression,” he said.

He said the country’s credibility to fulfill its military commitments to maintain peace in the region “depend as much, if not more, on our American alliance,” he added.

Ending the VFA could also compromise the goodwill and friendly relations between the Philippines and the United States and the “robust” economic ties between the two countries may be affected as well, he said.

Lorenzana told senators the Philippines would not need the VFA indefinitely and it was in the country’s interest to become “self-sufficient in our defense.”

He said he asked the United States last year to review the Mutual Defense Treaty because of a “disconnect” between the Philippines’ and the United States’ interpretations of its commitments.“For some reason, the US do not want it reviewed,” he said.

According to him, he sought the review because he wanted to clarify what parts of the country were covered by the US security umbrella.

He considered Scarborough Shoal, which China seized in 2012, to be part of Philippine territory, but for the United States, it was not.

Sen. Richard Gordon opposed the termination of the VFA because the Philippine military was not ready for it.

“The people must know that our military has been bereft—leaving us dependent on our relationships with other countries. Strengthen the military, enrich the country. We have to look at the interest of our nations,” he said.

Senate President Pro Tempore Ralph Recto said the Philippines could terminate the VFA later, but “in a manner that is not rushed, but planned and programmed, and not out of pique.”

It would not be wise to terminate the agreement when “an intruder has built and continues to build what have become the bases of our insecurity right under our belly,” he said, referring to China’s artificial islands in the South China Sea.

“If we abrogate the VFA, this sharp contrast will not escape our people’s attention: On how we could let the red carpet stay for someone who has taken our land while booting the one who has been on our side in protesting such occupation,” he added.

The flaws of the VFA are compensated in part by the help the Philippines gets from the United States during natural disasters, Recto said, calling the Americans as the Filipinos’ “de facto disaster response unit.”

“And that is the inconvenient truth,” he said.

Locsin disclosed that the Presidential Commission on the Visiting Forces Agreement, which he chairs, was not consulted before the President announced his intention to end the VFA.

He, however, said the President could make his desire known and the DFA could later give him advice.

“The commander in chief must be able to express what he wants, his displeasure at the insult delivered by a foreign power. I would not want him to come first to me, nor do I believe the Secretary of National Defense would like [that],” he said.