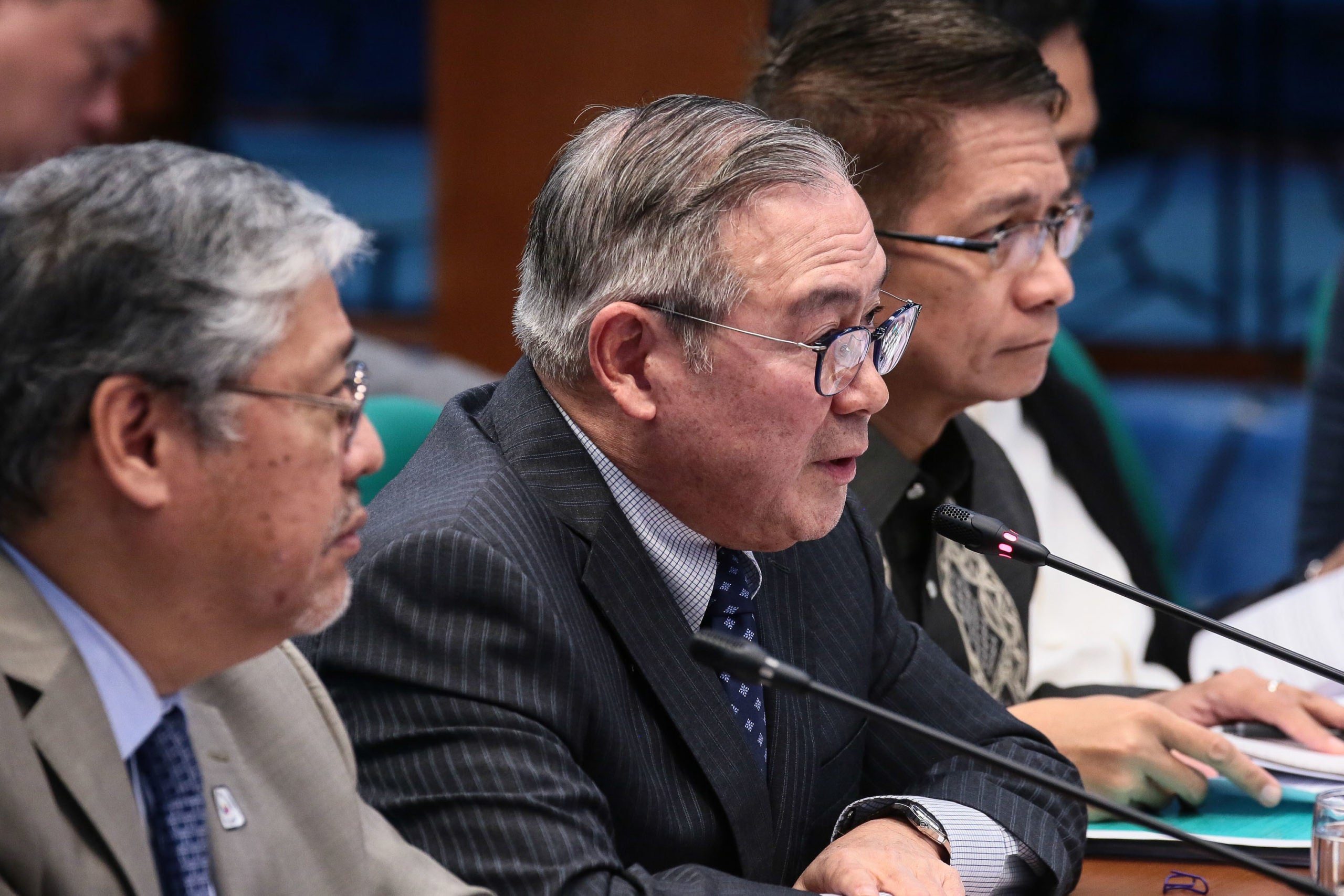 DFA drafts notice of VFA termination: Foreign Affairs Sec. Teodoro Locsin Jr. tells senators during a public hearing on the Philippines – United States (US) Mutual Defense Treaty Thursday, February 6, 2020 that he drafted a notice of the termination of the Visiting Forces Agreement (VFA) but has yet to send it to the US pending the direct instruction of President Rodrigo Duterte. (Voltaire F Domingo/Senate PRIB)

Facing senators in a hearing into the Visiting Forces Agreement (VFA), Locsin said absence of the agreement could result in the “severe curtailment” of the United States’ defense obligations, counterterrorism support and military assistance to the Philippines.

“The absence of a VFA would result into a severe curtailment of defense engagement of the Philippines and the cancellation of cooperative defense activities in the Philippines,” he said.

Locsin said the VFA provides the legal framework for the presence of US forces in the country.

“The US will not operate without the VFA,” he added.

US commitment under MDT

Locsin said the VFA is a “substance” that makes the Mutual Defense Treaty (MDT) effective.

“An armed attack on the Armed Forces of the Philippines, including in the South China Sea, would trigger the MDT,” he said.

“This is an unequivocal commitment that have been conveyed mainly verbally in the past, it is now in writing…The sinking of a Philippine vessel triggers an American response,” he added.

With this in mind, the foreign affairs chief said the termination of the VFA “will very likely dilute the commitment of the US under the MDT.

“The MDT is a deterrent to any attack from any power,” he added.

Locsin said the VFA “allows the US to provide a total package approach on defense articles that would be compatible with equipment assets and systems that are already in place.”

Locsin said the US has given the Philippines a total of US$ 554.55 million in security assistance and security cooperation programs from 2016 to 2019.

“This includes US$267.75 million in foreign military financing for the procurement of defense articles for the same period. In addition, under the DFA [Department of Foreign Affairs], the Philippines is able to receive after sale servicing in the form of maintenance packages that increase the articles’ value and lifespan,” he said.

He added that the US plans to grant the AFP about US$ 200 million in aircraft, training, equipment and construction in 2020 and in 2021, and more than US$ 45 million in Foreign Military Financing (FMF).

“Without the VFA, the US Departments of State and Defense will be hard put to get funds from the U.S. Congress for FMF and other defense assistance programs to the Philippines,” he added.

Locsin further pointed out that the VFA promotes interoperability between the Philippine forces and law enforcement agencies and their counterparts in the US.

“There are some 390 activities lined up for this year,” he said.

“The VFA allows for continued support for addressing non-traditional security threats. Through the VFA, US forces have been instrumental in assisting the Philippines to combat non-traditional security threats such as trafficking in persons, cyber attacks, terrorism and illegal narcotics through training, joint exercises and exchange visits,” he said.

“The US has also provided support for humanitarian assistance and disaster response as well as search and rescue operations,” he added.

The foreign affairs chief said assistance given by the United States on counterterrorism, especially on intelligence and capability building, “have proven to be vital.”

“This support was crucial in enabling the Philippines security forces to prevail in the battle of Marawi in 2017,” he said.

“Curtailment of the [US] Department of Defense’ support resulting from a terminated VFA would diminish the AFP’s immediate capabilities to degrade and deter terrorism and respond to terrorist emergencies,” he added.

During the hearing, Locsin underscored the need for a “vigorous” review of the VFA.