Notice of termination on VFA not yet served to US, Locsin tells senators | Global News

Notice of termination on VFA not yet served to US, Locsin tells senators 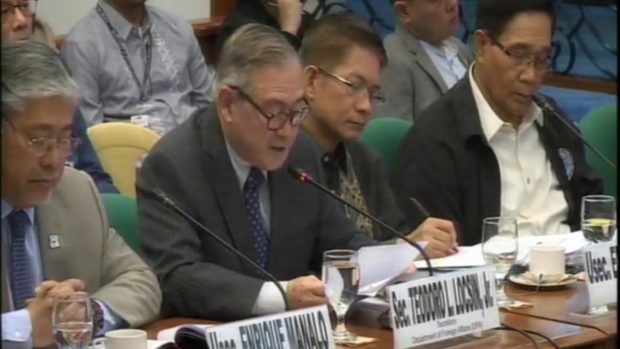 DFA Sec. Teodoro Locsin Jr. faces the Senate during the hearing on the termination of the PH-US visiting forces agreement. Screengrab from the Senate of the Philippines.

MANILA, Philippines — Foreign Affairs Secretary Teodoro Locsin Jr. said the Philippines has not yet served  a notice of termination on the Visiting Forces Agreement (VFA) to the United States.

During Thursday’s Senate foreign relations hearing into the VFA and other defense pacts between the Philippines and the United States, Locsin said he would only send the notice upon the “direct, personal order of the President.”

“I have prepared a notice of termination, but it has not been sent… I have specifically said that I will send it upon the direct personal order of the President and no one else,” the country’s top diplomat told the Senate panel.

A provision under the VFA states that the agreement would remain in force “until the expiration of 180 days from the date on which either party gives the other party notice in writing that it desires to terminate the agreement.”

The Senate committee is reviewing the VFA following President Rodrigo Duterte’s threat to scrap the military accord if the U.S. does not rectify the visa cancellation of his political ally, Senator Ronald “Bato” dela Rosa.