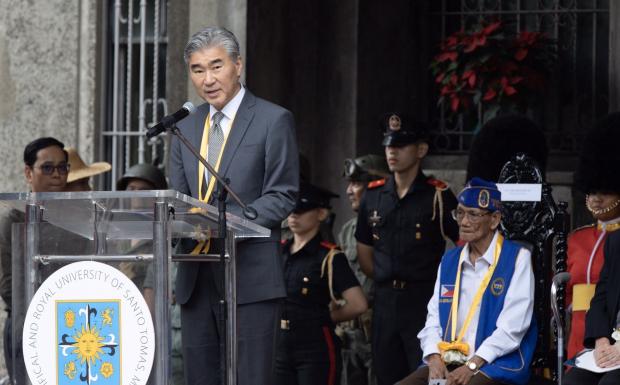 US Ambassador to the Philippines Sung Kim speaks on Monday, Feb. 3, 2019, at a ceremony honoring the American civilians interned at University of Santo Tomas during World War II, (Photo from the US Embassy)

MANILA, Philippines — US Ambassador to Manila Sung Kim lauded the decades-old alliance with the Philippines, amid President Rodrigo Duterte’s threat to terminate the country’s Visiting Forces Agreement (VFA) with Washington.

Speaking at an event commemorating the World War II internment camp at the University of Santo Tomas early this week, Kim, without directly mentioning the VFA, highlighted the importance of the military alliance of the two countries and the benefits of American presence here.

“The alliance remains as important today as it was 75 years ago, as we work together to respond to humanitarian disasters, counterterrorism, and keep the Indo-Pacific region free and open for all nations,” he said in his speech on Monday, Feb. 3.

The VFA, which was ratified in 1999, covers the conduct of American troops in the Philippines, who come here for joint exercises, training and disaster response activities.

“The profound importance of our alliance became evident to me shortly after my arrival in the Philippines three years ago, when crisis broke out in Mindanao. As ISIS-inspired terrorists took over the city of Marawi, our alliance didn’t skip a beat,” Kim said.

He said it was the “enduring military alliance” that allowed them “to provide valuable advice, assistance, and equipment in support of AFP’s [Armed Forces of the Philippines’] efforts to liberate Marawi from terrorist control.”

Another particular example that highlighted the importance of the alliance, he said, was the response to Typhoon Yolanda (internationally known as Haiyan) in 2013, one of the world’s strongest typhoons in history.

Kim said the US immediately dispatched 13,400 US troops, 66 aircraft, 12 ships to typhoon-hit areas in the Visayas to support relief efforts.

“We helped evacuate 21,000 Filipinos from impacted communities and brought in food, water, doctors, and medical supplies to assist those who remained,” he said.

But these kinds of activities and assistance of the Americans here cited by Kim may be affected in the future because of the possible termination of the VFA.

Duterte earlier threatened to end the military pact after the US revoked the visa of Sen. Ronald “Bato” dela Rosa, his close political ally and former police chief.

The US did not cite a reason for the visa cancellation, but it was likely because of Dela Rosa’s role in implementing the administration’s highly-criticized drug war. It has also made no comment on Duterte’s threat to junk the agreement.

The Presidential Commission on the Visiting Forces Agreement is set to report to the President this week on the impact of the possible scrapping of the VFA with the United States.