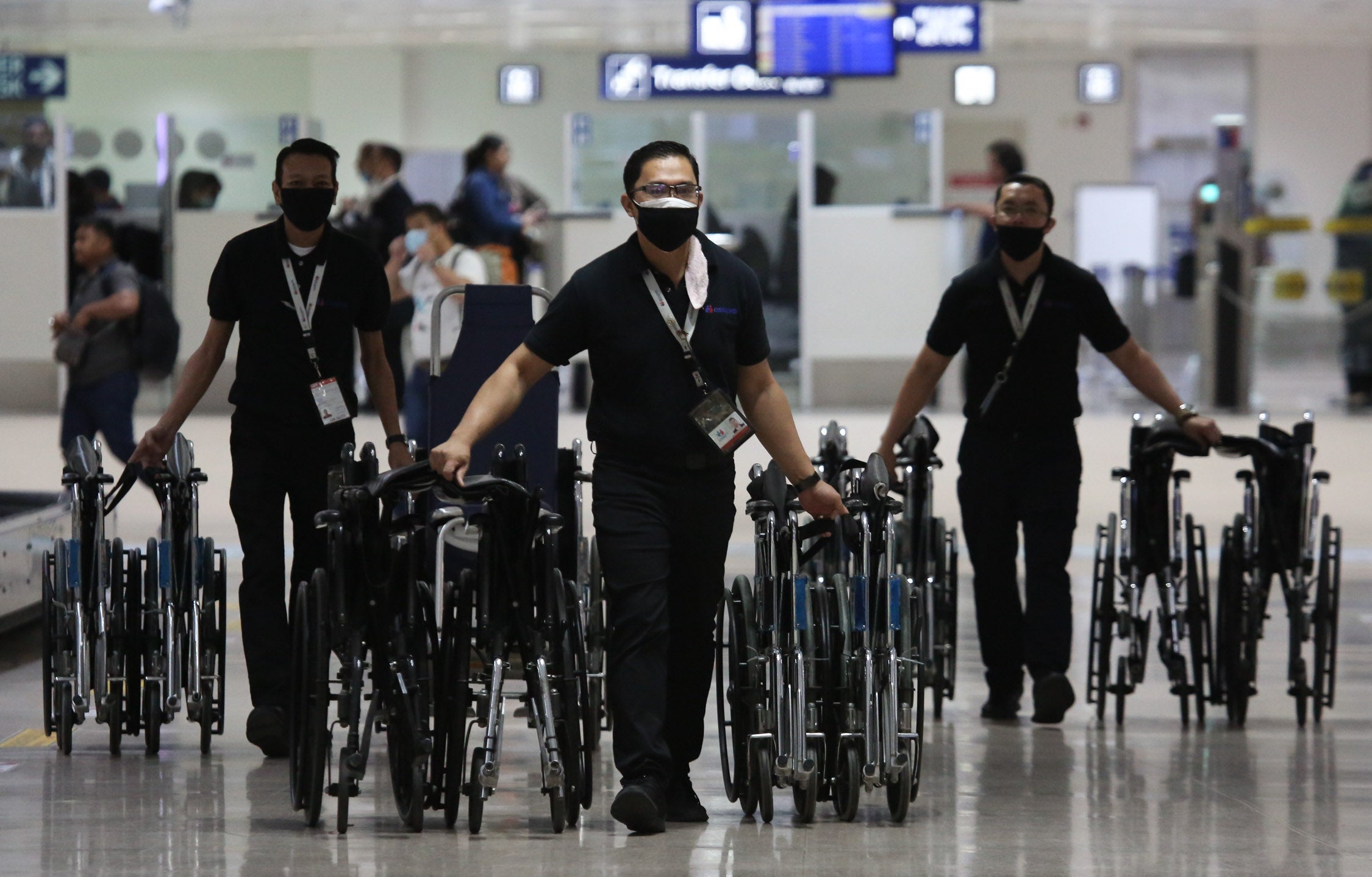 PRECAUTIONS Personnel at Ninoy Aquino International Airport wear face masks as they prepare to receive newarrivals who may be sick or in need of assistance on Friday, a day after health officials confirmed the first of the newnovel coronavirus in the country.—LYN RILLON

The Department of Health (DOH) on Friday said it would recommend an expansion of the travel ban on Chinese nationals to include more Chinese provinces with high incidence of infection by the new novel coronavirus (2019-nCoV).

This follows President Duterte’s imposition of an indefinite travel ban on Chinese nationals coming from Hubei province in Central China, as disclosed by his spokesperson on Friday.

The DOH had recommended the ban when it confirmed on Thursday the first case in the Philippines of the Wuhan virus infection—named after Hubei’s capital which has been on lockdown amid the outbreak.AdvisoryAlso on Friday night, the Department of Foreign Affairs (DFA) issued an advisory calling on Filipinos in Hubei, including Wuhan, to be repatriated.

Filipinos in Wuhan and the rest of Hubei who wish to be repatriated should contact the Philippine Consulate General in Shanghai by Feb. 3, the DFA said in a statement.

Upon their arrival in the Philippines, they will be under quarantine for 14 days, in accordance with the DOH guidelines. The DFA said the repatriation was “subject to China’s rules on disease containment, including immigration clearances, quarantine process, among others.”At a press conference on Friday, Health Undersecretary and DOH spokesperson Rolando Enrique Domingo said “the Philippine government, upon the recommendation of DOH, has issued a temporary travel ban covering all travelers coming from Hubei province of China.”

“The DOH will also be recommending the expansion of the travel ban coverage to more Chinese provinces as new information on the increasing number of cases per region arises,” Domingo also said.

Domingo said Chinese provinces with 100 cases could be covered by the ban while those with one, two or three cases will not probably be included.

The DOH spokesperson also cited the World Health Organization’s (WHO) declaration of a global health emergency following the outbreak in China and elsewhere.

Speaking to reporters also on Friday, Rabindra Abeyasinghe, WHO representative in the Philippines, said “this classification is to help member states strengthen their preparedness and response capacities to deal with preventing and controlling this outbreak. [It] is largely about controlling the spread of the virus and the disease it causes.”

Abeyasinghe stressed that “most of the transmissions, in fact, more than 95 percent, happen from symptomatic patients. It’s a very negligible transmission that happens during the incubation phase before people who are infected become symptomatic.”

“We need to evaluate this risk appropriately and communicate it correctly. If we do not do that, we create unnecessary concern and panic among people,” he said, adding:

“The evidence now shows that the disease is overwhelmingly transmitted by symptomatic people. So, yes, there is a risk, but the actual transmission that [is] being reported is negligible. I want to emphasize that this is what we know at this point of time. This may change as more evidence emerges but this is similar to what we had during the MERS (Middle East Respiratory Syndrome)-CoV outbreak [in 2012].”

Domingo said the “DOH is assuring the public that the first confirmed case is isolated and being properly treated, and that contact tracing is being conducted in coordination with the Bureau of Quarantine.”

He was referring to a 38-year-old Chinese woman who he said was currently confined at San Lazaro Hospital in Manila. The woman’s companion is also a “patient under investigation,” or PUI, and is confined in the same hospital.

Domingo said 23 more PUIs were currently admitted and isolated, while six had been discharged but are still under monitoring. The DOH also reported that one PUI has died but the cause was still being determined.

In a Palace statement on Friday, presidential spokesperson Salvador Panelo said that “upon the recommendation of Health Secretary Francisco Duque III, the President has issued a travel ban [on] Chinese nationals coming from the Hubei province of China where the [coronavirus] originated.”

“It will last until the threat is over, given that the safety of our countrymen is foremost in the President’s mind,” Panelo also said, adding that Mr. Duterte had instructed the DOH “to commence the protocols it has prepared for such an eventuality to contain the disease and neutralize its transmission and spread.”

Panelo also defended the government from criticisms that it acted too late or was being relaxed in confronting the situation.

Panelo also dismissed criticisms about a meeting planned by the Palace for “next week,’’ as disclosed by Sen. Christopher “Bong” Go.

“No, that meeting is for new developments. He already has his instructions. There are protocols even before, and these are being implemented,” Panelo said.

According to transportation officials, the Palace-recommended travel ban was the same prohibition they were already enforcing as of Jan. 23, when they ordered about 500 arriving tourists from Wuhan to be flown back.

Some airlines had already announced that they would be suspending flights to various destinations in China. Other travels in and out of the country remains mostly business as usual, with the Department of Transportation only ordering attached agencies to ramp up monitoring across all Philippine gateways. —WITH REPORTS FROM MARLON RAMOS, DJ YAP, KRIXIA SUBINGSUBING AND PATRICIA DENISE M. CHIU