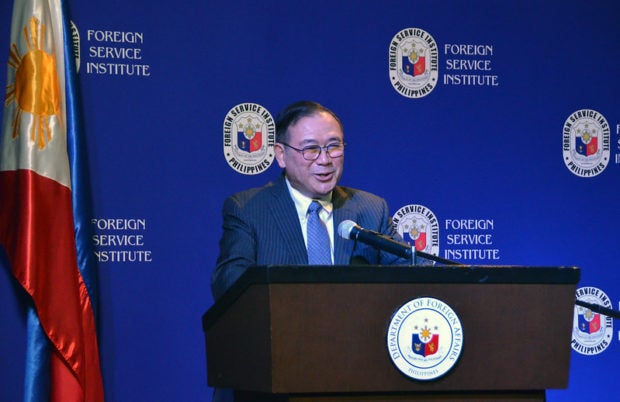 MANILA, Philippines — The possible termination of the Visiting Forces Agreement (VFA) was not mentioned in the handout released by the US State Department after a meeting with Foreign Secretary Teodoro Locsin Jr. in Washington.

The Philippines’ top diplomat met with Deputy State Secretary Stephen Biegun on Friday (Manila time) days after President Rodrigo Duterte threatened to terminate the VFA with the US in response to the revocation of Sen. Ronald “Bato” dela Rosa’s entry visa. The US did not cite a reason for the visa cancellation but it was likely because of his role in implementing the administration’s highly-criticized drug war.

On Wednesday, Duterte barred his Cabinet members from traveling to the US, including family trips. Locsin is exempted from the ban to allow diplomatic relations to continue.

Before Locsin left the Philippines last week, he said he was heading to Washington “on a totally unrelated matter.”

The statement released by the US State Department made no mention of Duterte’s threat to end the military agreement. Instead, it said that both countries “reaffirmed the value of the U.S.-Philippine alliance based on the deep, historic friendship and mutual respect.”

“They also discussed the importance of that partnership to face current global health challenges,” the department said.

The two officials also discussed the importance of denuclearization of North Korea, and the commitment to ensure a free and open Indo-Pacific in which all countries prosper side by side as sovereign, independent states.

Meanwhile, in the Philippines, a Cabinet-level meeting of the security, justice and peace cluster was set at a hotel in Manila on Friday to address the VFA issue and other matters like the novel coronavirus and the tensions in the Middle East.