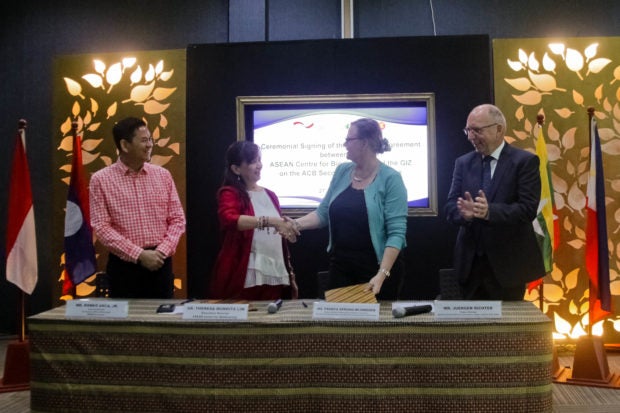 LOS BAÑOS, Laguna –– A German development agency signed an agreement Monday with an intergovernmental organization based here to allow nationals from the Association of Southeast Asian Nations (ASEAN) member states to work in its headquarters.

The financing agreement signed by Deutsche Gesellschaft für Internationale Zusammenarbeit (GIZ) with the ASEAN Centre for Biodiversity (ACB) is for an enhanced secondment program.

The ACB secondment program aims to promote and facilitate the participation of ASEAN member states in carrying out selected functions of the ACB through temporary assignments.

“We have identified this program as one of the effective approaches to capacity building. Through this intervention, learning experience and cultural exchange through face-to-face interactions and actual hands-on application of biodiversity-related concepts are maximized,” said Dr. Theresa Mundita-Lim, ACB executive director, during the ceremonial signing held Monday.

“This next phase underlines Germany’s continuing commitment to supporting the ASEAN Region in achieving its biodiversity goals, through the ACB,” said Franca Sprong-Wijnreder, coordinator of the GIZ Biodiversity and Marine Protection Cluster.

Qualified AMS nationals will be able to work on ACB projects, like the (ASEAN) Heritage Parks, ACB’s banner program. The Philippines is home to eight AHPs and two of them are in Southern Tagalog: the Mount Makiling Forest Reserve in Laguna province and Mounts Iglit-Baco National Park in Mindoro.

Interested applicants to the secondment program must come from any of the AMS, aged 30 to 58, and working in a government agency or occupying professional, technical, or mid-level management positions in a university, research, policy development or an advocacy organization.

“We trust that the secondees will help the ASEAN in developing a ‘regional mindset’ that will be key to the achievement of the region’s biodiversity goals,” Lim said.