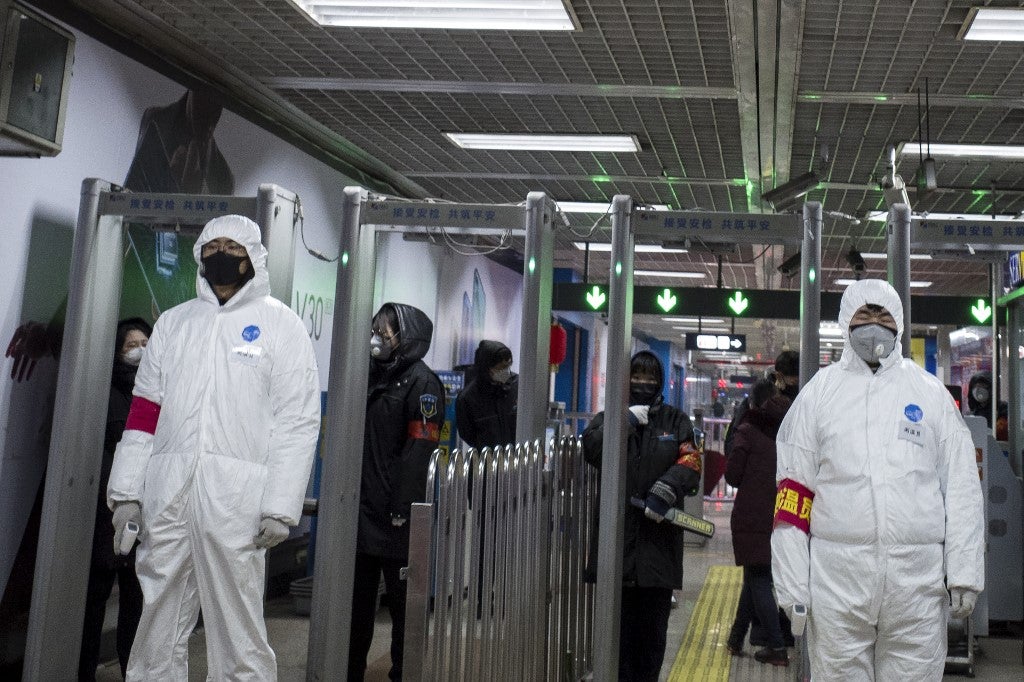 Security personnel wearing protective clothing to help stop the spread of a deadly virus which began in Wuhan, stand at a subway station in Beijing on January 26, 2020. (Photo by NOEL CELIS / AFP)

MANILA, Philippines — The World Health Organization (WHO) has recorded a total of 2,014 confirmed cases of the novel coronavirus or 2019-nCoV globally, according to its situation report on Sunday, higher by 694 compared to its last report on Saturday.

According to WHO, 56 deaths were recorded in China, as also earlier reported by Chinese health authorities.

Of the total number of confirmed cases, 1,985 are in the same country, including five and two in special administrative regions Hongkong and Macau, respectively, and three in Taipei in the self-governing island of Taiwan.

Of the 56 deaths, 52 are in Hubei where Wuhan City, the epicenter of the outbreak, is located, while four are from outside the province.

Twenty-nine confirmed cases have been reported outside China in 10 countries. Specifically, there are three confirmed cases in Japan, two in South Korea, two in Vietnam, four in Singapore, four in Australia, three in Malaysia, five in Thailand, one in Nepal, two in the United States, and three in France.

Of the 1,975 confirmed cases in China, excluding those in Hongkong, Macau, and Taipei, 324 cases have been reported as “severely ill,” according to WHO.

WHO’s assessment of the outbreak’s risk has not changed since its assessment on Jan. 22. It said the risk was still very high in China, high at the regional level, and high at the global level.

“WHO has not received evidence that the virus has changed. WHO awaits further information from Chinese officials,” the organization said.

Amid the outbreak, WHO said it is in regular and direct contact with member states where cases have been reported, and is providing information to other countries about the situation as well as support as requested.

Among the basic precautions to reduce the risk of transmission of acute respiratory infections are avoiding close contact with people suffering from these infections, frequent hand-washing, avoiding unprotected contact with farm or wild animals, enhancing standard infection prevention and control practices in hospitals, and practicing cough etiquette.