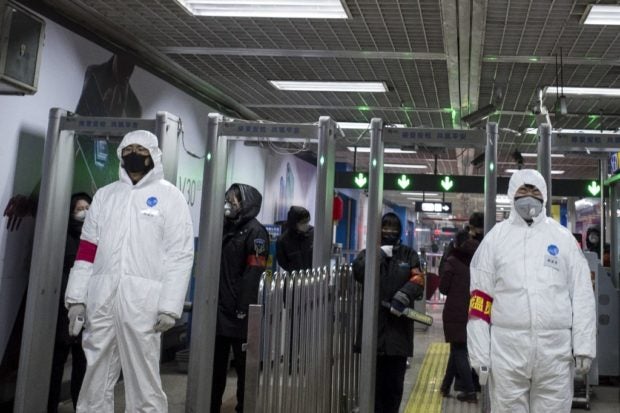 Security personnel wearing protective clothing to help stop the spread of a deadly virus which began in Wuhan, stand at a subway station in Beijing on January 26, 2020. – China on January 26 expanded drastic travel restrictions to contain a viral epidemic that has killed 56 people and infected nearly 2,000, as the United States, France and Japan prepared to evacuate their citizens from a quarantined city at the outbreak’s epicentre. (Photo by NOEL CELIS / AFP)

MANILA, Philippines — The government will not evacuate Filipinos working in countries battling a new pneumonia-like illness for now, but urged them to follow local health instructions to help prevent its spread.

It spreads fast, like the Severe Acute Respiratory Syndrome (SARS) that infected almost 2,000 and killed nearly 800 people, mostly in China, in 2002-03, and is believed to have originated from wild animals. Unlike the SARS coronavirus, however, the new coronavirus is transmissible from human to human.

Malacañang on Sunday gave the assurance that the Department of Health (DOH) is prepared to deal with the new coronavirus should it reach the Philippines.

Speaking in a radio interview, presidential spokesperson Salvador Panelo said that if they feel safe, Filipinos in the stricken countries should not be forced to leave “because their livelihood is there.”

“Authorities in those countries are also doing something to contain it,” Panelo said.

There are no confirmed cases of the new illness in the Philippines, and ACT-CIS Rep. Rowena Niña Taduran said Filipinos should not allow themselves to be caught up in the “hysteria” as the country had “a system in place” to deal with the disease should it get here.

In a statement released on Sunday, Taduran noted that the Philippines had recovered from the SARS and the Middle East Respiratory Syndrome (MERS) epidemics and said all the country needed to do should the new coronavirus hit the Philippines was to strictly implement the system it had used to combat the previous two viral illnesses.

She advised Filipinos to develop resistance to viruses by “keeping fit through exercise and a healthy diet.”

Taduran also called on Filipinos returning from other countries not to ignore any flu-like symptoms if they feel unwell and instead seek medical help immediately.

The government has raised border defenses, and China has recalled its citizens traveling to the Philippines.

On Saturday evening, the last group of Chinese tourists from Wuhan who spent the Lunar New Year on Boracay Island flew home, a day earlier than their scheduled return trip.

“The airline decided to advance their flight because of the continued concern [about their presence here],” said Eric Apolonio, spokesperson for the Civil Aviation Authority of the Philippines.

Residents of Boracay had protested the operation of tours from Wuhan to their island despite the spread of the new coronavirus in that central Chinese city.

Some have called for a temporary ban on all tourist traffic from China to Boracay.

In Tacloban City, the 36-year-old American who arrived there on Jan. 16 from Wuhan was reported on Sunday to be doing well in a government-run hospital.

John Paul Roca, DOH information officer in Eastern Visayas, said on Sunday that the American had no more fever, but had “occasional, nonproductive cough, just like an ordinary cough.”

“The only difference is that he came from Wuhan City,” Roca said.

But the American, he said, would be confined for 14 days, or up to Feb. 2, because the incubation period of the new coronavirus was 14 days.

Roca said all the people who had contact with the American had undergone “self-quarantine” and remained asymptomatic.

In Bohol, Dexter Muneses Ancla, an official of the Bohol Conservation Society, urged suspended Gov. Arthur Yap to restrict tourist traffic from China after two Chinese nationals, one of them a 2-year-old child, had been taken to hospital with flu-like symptoms. The two, however, proved negative for the new coronavirus and were released. —WITH REPORTS FROM NESTOR P. BURGOS JR., JOEY GABIETA, AND LEO UDTOHAN INQ