Asian gecko at risk over claims it can cure AIDS 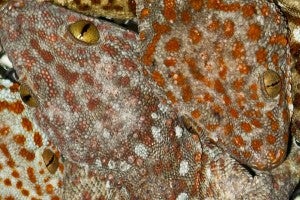 KUALA LUMPUR, Malaysia—Claims that a nocturnal Asian lizard can be used to help treat the HIV virus have led to a sharp boom in smuggling of the reptile, putting it at risk, a conservation group said.

Demand for the Tokay Gecko has skyrocketed in recent years after online blogs, newspaper articles and wildlife traders extolled the consumption of the lizard’s tongue and internal organs as a miracle cure for HIV, TRAFFIC Southeast Asia said in a report.

TRAFFIC said such claims were unfounded and “indicative of an elaborate hoax.” The Philippine government in July also warned that using geckos to treat AIDS and impotence may put patients at risk.

“TRAFFIC is alarmed at the massive increase in trade of these geckos. If the trade continues to mushroom, it could take years to repair the damage currently being inflicted on gecko populations,” said Chris R.Shepherd, TRAFFIC’s regional deputy director.

The geckos, popular as pets in Asia, have long been used as traditional medicine for illnesses such as diabetes, asthma, skin disease and cancer, the report said. Their carcasses are dried up and ground into powder for consumption. In some parts of Asia, Tokay wine or whisky is consumed to boost energy.

The Tokay Gecko, which has distinct orange-spotted, blue-grey skin, can grow up to 15.7 inches (40 centimeters) in length. The reptiles feed on insects and worms, helping to regulate pests and maintain the ecosystem.

TRAFFIC said more than eight and a half tons of dried geckos were legally imported into the United States between 1998 and 2002 for use in traditional medicine. Huge numbers are traded within Asia and it said Malaysia has emerged as a key hub to meet demand, especially in China.

It said 1,000 geckos believed headed for Malaysia were recently seized in Cambodia, while a couple have been detained for trying to smuggle nearly a $1 million worth of lizards from Thailand to Malaysia. Customs officers in Indonesia’s Java island also recently foiled a bid to smuggle dried Tokay Geckos bound for Hong Kong and China using expired permits.

Shepherd said the Tokay Gecko remained poorly protected by national legislation and called for the lizard to be protected under CITES, the international convention on endangered species, before it becomes extinct.