MANILA, Philippines – US Secretary of State Hillary Clinton on Wednesday again ruled out a new run for president or becoming vice president, saying she was ready to retire after her term runs out. 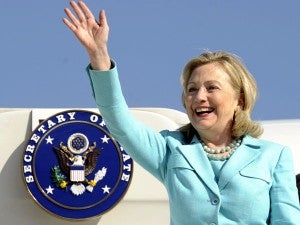 Clinton was speaking to a televised forum on a visit to the Philippines, where numerous young people told interviewers that they hoped she would run again to become the first woman to take over in the White House.

“I have had the opportunity to run for president and hopefully break down some barriers to women’s political participation, but I’m looking forward to moving on with the next phase of my life,” she said.

Clinton also said she was “not at all” interested in becoming vice president, saying she believed that Joe Biden was doing an “excellent” job.

She voiced confidence that Obama would be re-elected in November 2012, saying: “I think he has earned the right to a second term, but I will be moving on as soon as he gets someone in place to replace me.”

Clinton narrowly lost the Democratic Party’s presidential nomination to Obama in 2008 but recent polls show that she is one of the most popular figures in US public life.