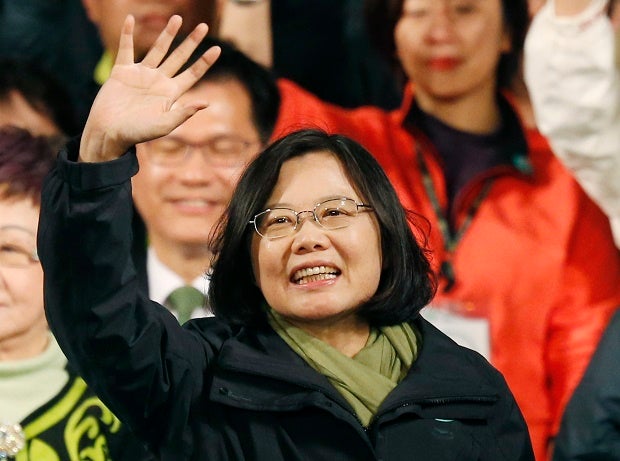 In this Jan. 16, 2016, file photo, Taiwan’s president-elect Tsai Ing-wen waves as she declares victory in the presidential election in Taipei, Taiwan. (File photo from AP)

MANILA, Philippines – Ties between Taiwan and the Philippines would even become stronger with the re-election of Taiwanese president Tsai Ing-wen, an official from the Taipei Economic and Cultural Office (Teco) in Manila said.

Ambassador Michael Peiyung Hsu explained on Thursday that Tsai’s administration has been supportive of Taiwan-led programs in the Philippines, and her having a second term would assure that the relations would maintain a steady, positive pace.

“The incumbent president was re-elected, so I do believe the relation between our two countries would be further strengthened,” Hsu said after a program at Teco’s office in Makati.

“And since we already started our New Southbound Policy since 2016, and we continuously try to do something in this country–working together with government agencies, especially in the field of agriculture,” he added. “We hope to see that Taiwan can really offer something to the Philippines, and we can work together.”

According to Hsu, Taipei can also help Manila by sharing their experience in enforcing a universal healthcare program, as both countries supposedly share the same style and method.

“Like you are going to have your universal health coverage, Taiwan started this in 1995, and so we would like to share with the Philippines our best practices, because we used the same system,” he said.

“So we hope to see how we can share with you, our experience,” he added.

Tsai, a stalwart of the Democratic Progressive Party that is pushing for sovereignty from mainland China, was re-elected after receiving 57.2 percent of the total votes, compared to just 38.6 percent that her opponent got.

Political observers note that the elections were also a referendum on the Taiwanese people’s approach towards proposals for reunification with the People’s Republic of China.

In fact, after being declared the winner, Tsai already warned China that Taiwan has already been independent from the Asian superpower for a long time.

Taiwan, also known as the Republic of China, separated when nationalist politician Chiang Kai-shek’s Kuomintang was forced to relocate out of the mainland in the late 1940s after the communist movement led by Mao Zedong ran over the nationalist forces.

But even years after the civil war, mainland China is still claiming ownership of Taiwan, which has been a major cultural and technological hub in the region.