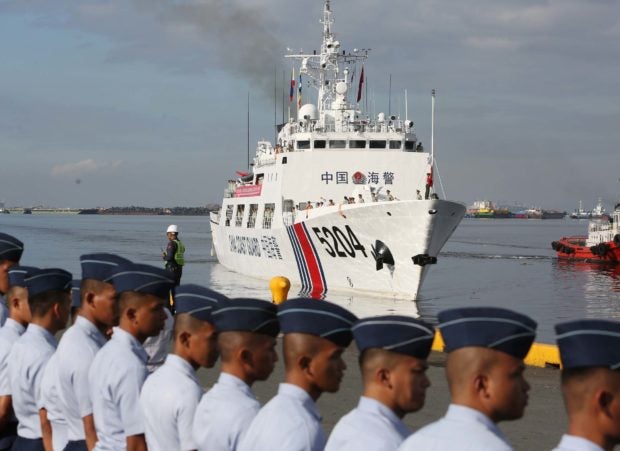 HISTORIC PORT CALL The Chinese Coast Guard ship is welcomed by members of the Philippine Coast Guard as it docks in Pier 15 on Tuesday. —MARIANNE BERMUDEZ

MANILA, Philippines — The Philippine Coast Guard (PCG) on Tuesday vowed to strike a “win-win” deal for Filipino fishermen amid China’s continued aggression in the West Philippine Sea, as their Chinese counterpart made its historic first port call in Manila.

PCG commandant Adm. Joel Garcia said they planned to use the mechanisms under a 2016 memorandum of agreement signed by Manila and Beijing to better protect Filipino fishermen in the hotly disputed Scarborough Shoal.

Since the MOU was signed, both coast guards have been meeting thrice — first in Subic and then Davao — to “once and for all [put] in place resolutions ensuring that whatever happened with our fishermen in the earlier years would never happen to them again.”

Garcia was referring to recent reports of harassment by the Chinese Coast Guard of Filipino fishermen in the West Philippine Sea (WPS), which Beijing continues to claim is part of their territory.

But for Garcia, it’s best to move forward from these “isolated cases” and discuss them through these bilateral meetings “rather than hold a grudge over those things all the time and close our doors to diplomatic channels.”

“This is a good chance for us since they are the ones who came here,”Garcia said. “We have the upperhand here, their ship is berthed here, their delegation is here, which means that once and for all we can finally lay our cards on the table.”

“If we’re able to present [our plans] and they accept it, I think there’s a good chance that we could reduce or even eliminate the disputes surrounding the West Philippine Sea,” he added.

Garcia also emphasized the need to establish hotlines of communication between WPS vessels to avoid provocation.

“In the past three years, we have not fully established such, which has led to misunderstandings because our tactical forces are still not communicating with each other,”he said.

During the weeklong port call, both the PCG and CCG will also conduct joint exercises on maritime security, search-and-rescue and firefighting.

Beijing’s coast guard, led by their chief Maj. Gen. Wang Zhongcai, toured their counterparts and reporters on their law enforcement 5204 ship that berthed on Pier 15.

A large red banner hung on the ship’s hull, which read: “Strengthening dialogue and cooperation on maritime issues, making the South China Sea a sea of peace, friendship and cooperation for the benefit of the two peoples.”