Boeing pitch to PH military: Get Apache, stop being ‘pushed around’ in WPS | Global News

Boeing pitch to PH military: Get Apache, stop being ‘pushed around’ in WPS

MANILA, Philippines— American aircraft manufacturer Boeing, reeling from its biggest crisis over its 737 Max planes, is making a pitch for some of its most advanced military aircraft to the Philippine government.

David Brostrom, marketing and sales director for vertical lift of Boeing Indo-Pacific, said at a media roundtable on Wednesday (Dec. 18) that it was offering to the Philippine military two of its most reliable and high-tech helicopters—the Apache AH-64E and Chinook CH-47F.

Boeing is offering its Chinook CH-47F and Apache AH-64E helicopters to the Philippine military pic.twitter.com/x3njxCoSil

The two choppers, he said, are known for their capability and interoperability advantages.

“The biggest advantage — who would not want this?” said Brostrom.

“Its interoperability with all your partners, not just with the United States, look at all the people flying it in Asia. Why wouldn’t you want to have this capability to help your own people?” he said.

Boeing boasts of the Apache AH-64E as the most advanced, multi-mission attack helicopter of the US military and at least 15 other armed forces in the world.

The Apache, a daunting piece of military hardware, has a maximum cruise speed of over 284 kilometers per hour and can be armed with 16 Hellfire missiles, 30 mm auto cannon and 2.75 inch rockets. 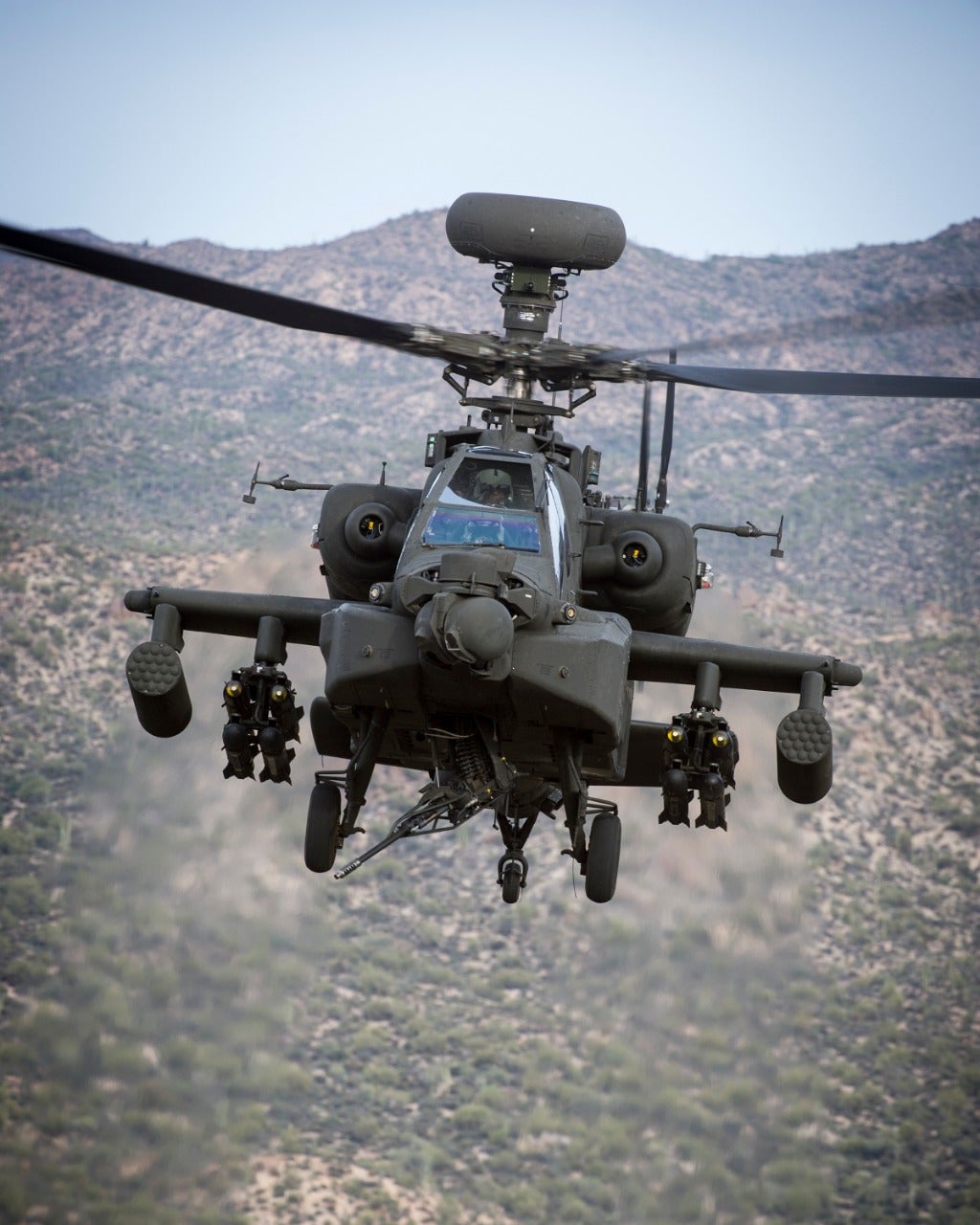 The intimidating profile of an Apache helicopter. BOEING

As an added pitch, Brostrom said the Apache would be ideal for maritime operations in the West Philippine Sea, where the Philippines is disputing territory with China, a military power in Asia.

“It’s time for the Philippines to have something like this especially with what’s going on in the region — your internal threats down south and your external threats in the West Philippine Sea,” said Brostrom.

He said if China “knew the Philippines had Apache, they’d be less likely to push you around.”

“It’s a deterrent. If you start buying this high-end stuff your enemies are gonna be thinking twice of doing something,” said Brostrom.

Another significant feature of the Apache, he said, is its Link 16 capability — the standard communications system used by the US, NATO and coalition forces for transmitting and exchanging real time tactical data. The Philippine military also uses this.

“For the Apache…the Link 16 and other sensors enable you to link in to the US government Link 16 architecture. That’s what you want, you wanna fight as a team,” he said.

“When they come in, you just share information immediately. If you have just an airplane with guns, that’s all it is,” the Boeing sales executive said.

“The guy will be out there flying blind because war is different now. War is fought at huge distances and intelligence,” he went on.

Brostrom said the Philippine Air Force had already inquired the costs of six to 16 units of Apache in a request sent last October to Boeing.

The average flyaway cost for one Apache unit is pegged at $32 million.

Boeing is also eager to corner a new market for its legacy heavy-lift helicopter, the Chinook CG-47F. Its capabilities are hard to match, Brostrom said.

“There may be cheaper ones, there’s a lot cheaper planes out there but they’re not the best,” he said.

The Chinook is the workhorse aircraft of the US and other military forces around the world. It costs around $50 million per.

Brostrom said the humanitarian relief and disaster response mission capability of this aircraft and its ability to land on mountainous terrain are a perfect fit for the Philippines, which is often hit by disasters and calamities.

“You don’t have to worry about the runway,” he said of Chinook landing needs.

“The PAF doesn’t have a capability like this, you still have to clear the runway. You can get into an area and there’s no need to worry about clearing the runway, just land,” he said.

The Chinook may also be used for cargo and troop transport, special operations and assault operations.

While Boeing is confident of its products, Brostrom acknowledged that there are other factors in buying defense hardware like international relations and politics.

“It’s just not simple but as far as the Philippines go, we think this is a perfect fit,” he said.

President Rodrigo Duterte had said previously that his administration would no longer procure defense equipment from its traditional ally United States because of US threats to impose sanctions on countries buying military equipment from China and Russia.

Responding to reports that the Philippine Air Force (PAF) was buying MI-17 helicopters from Russia, Brostrom said the Russian aircraft was a different type as these are medium-lift.

Brostrom also said the PAF had inquired about the possible purchase of Harpoon air-launched anti-ship missiles.

The potential sale of the aircraft would be conducted through a Foreign Military Sales route.