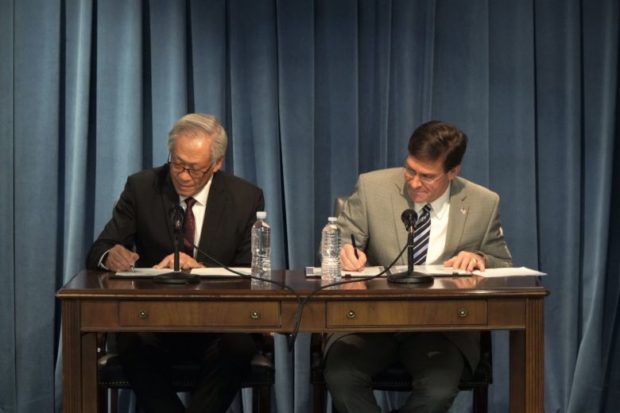 Minister for Defence Dr Ng Eng Hen (left) and US Secretary of Defense Mark Esper sign the Memorandum of Understanding concerning the establishment of a Republic of Singapore Air Force Fighter Training Detachment at Andersen Air Force Base, Guam, on the sidelines of the 7th Reagan National Defense Forum. PHOTO: MINDEF via The Straits Times

SINGAPORE — Singapore views the continued engagement of the United States in Southeast Asia as important, Defense Minister Ng Eng Hen said at a national security forum in California on Saturday.

This belief is behind Singapore’s allowing of US ships and planes to use its military air and naval bases for almost 30 years, under a key defense pact first signed by founding Prime Minister Lee Kuan Yew and then US Vice-President Dan Quayle in 1990. The US had then just lost access to its naval and air bases in the Philippines, and Mr Lee said Singapore stepped forward because an American presence was essential for the continuation of international law and order in East Asia, Dr Ng said.

The 1990 agreement was renewed in September by Prime Minister Lee Hsien Loong and US President Donald Trump, allowing American forces to use Singapore’s air and naval bases for another 15 years until 2035.

In his speech, Dr Ng lauded Singapore-US defense ties, which took a step forward last Friday with the signing of a deal which gives the Republic of Singapore Air Force a training base for its F-15 fighter pilots in the US territory of Guam.

“The strong, mutually beneficial defense relationship between the US – the world’s largest economy and military – and Singapore – a tiny city-state – is unique,” said Dr Ng, who was in California at the weekend to attend the seventh Reagan National Defence Forum.

He pointed to how the American military is the most frequent user of Singapore’s air and naval bases today. In return, more than 1,000 of Singapore’s soldiers train in the US every year.

“I do not think there is any other country, big or small, that has the (same) kind of footprint in the US, and we are very thankful for these training opportunities,” said Dr Ng, who spoke at a panel session titled “Advancing US National Defense: Working with Allies and Partners”.

First, an openness to ideas and people.

Second, both countries are on “a quest for a global system that frees, unites, includes and enriches, rather than divides and impoverishes”, he said.

After the Cold War, the US sought to put in place a regional and global order based on openness, fair trade and the rule of law, Dr Ng noted.

This dovetailed with the basis of Singapore’s progress: The same principles of multilateralism, free trade and rule of law, he said.

Third, Singapore and the US both deal with transnational challenges, from disruptions of the existing international finance and global trading systems, to terrorism and climate change. “We will need the US working with other nations to deal with these challenges,” said Dr Ng.

While in California, Dr Ng met US National Security Adviser Robert O’Brien, former US secretary of defense James Mattis, who resigned last December, and senators, congressmen and other defense officials, the Ministry of Defense said in a statement.

Other prominent figures who spoke at the panel session included Swedish Defense Minister Peter Hultqvist, US Undersecretary of Defence for Policy John Rood and his predecessor Michele Flournoy.

Dr Ng’s comments came as US Secretary of Defence Mark Esper earlier said at the same forum that he wanted to reallocate forces to the Indo-Pacific command because he saw the region as America’s priority theater going forward.

Asked about the US’ continued partnership in the region, Dr Ng said most in Asean would say that they want America’s presence to continue.

“They do not want to choose and be caught in the Great Power rivalry between the US and China, but they also want both to be involved, including other powers,” he said.

The region also recognizes that America’s domestic politics was not business as usual and is adjusting to that reality, he said.

“Do we want the assurance that the main American foreign policy is still inclusive, multilateral and progressive? I think certainly yes, and we continue to believe it to be so,” he added.