globalnation /
AT A CHARITY BAZAAR 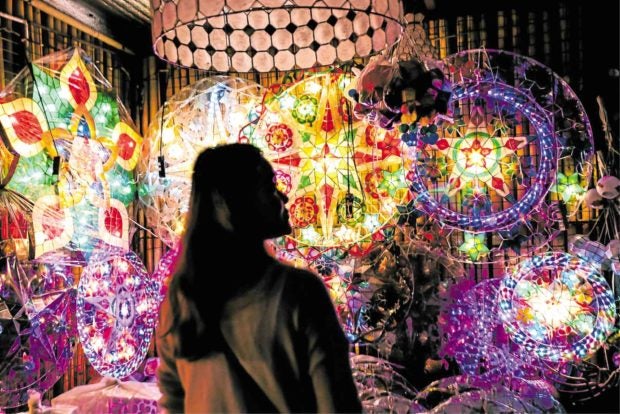 CHRISTMAS COLORS A woman gazes in wonder at a display of Pampanga lanterns with their multicolored lights that change patterns like a kaleidoscope. —LEO M. SABANGAN II

CITY OF SAN FERNANDO, Pampanga, Philippines — Christmas lanterns from this Pampanga capital were featured in a charity event in Egypt, the 28th country to showcase the Filipino-made handcrafted pieces so far.

It was the 28-member Asian Diplomats’ Spouses Association (Adsa) which featured the lanterns in its Asian Food and Crafts Charity Bazaar at the Conrad Hotel in Cairo, the Philippine Embassy there said in a report to the city government.

The lanterns, made mostly of capiz (flattened seashells), were displayed alongside food, handicraft and products from several other embassies.

Locally called “parol,” some of the lanterns the size of old-fashioned washbasins were given as gifts to guests, including Iman Hassaballah, wife of Egyptian Prime Minister Mustafa Madbouly.

Among the beneficiaries of the Nov.16 bazaar were Light and Hope Association for blind women in Egypt, Dar El Hana Orphanage and the St. Joseph Parish Informal Education Center for Eritrean children refugees, according to Priscilla Confiado, Adsa president and wife of Ambassador Sulpicio Confiado.

The Christmas lanterns from this city also graced the nine-day National Festival of Tolerance and Humanity at Umm Al Emarat Park in Abu Dhabi, United Arab Emirates, starting Nov. 8. According to the Philippine Embassy in Abu Dhabi, this was the second time that the lanterns adorned the festival since last year.

Forty embassies joined the festival where San Fernando’s art and technology in traditional lantern-making were explained.

The lanterns would also be shown in “Paskong Pinoy in the Year of Tolerance: A Christmas Concert,” on Dec. 6 in Abu Dhabi.

Giant lanterns and their smaller versions have gone globe-trotting alongside the phenomenal growth of the overseas Filipino workers in the 1970s, Mayor Edwin Santiago said.

Indeed, the first documented overseas display of giant Pampanga lanterns was in 1979 for the 75th anniversary of the Philippine Hawaii Commission that year, according to a timeline prepared by the city tourism office based on information given by old lantern makers.

That was 71 years after the acknowledged pioneer of the craft, Francisco Estanislao, enlarged the parol.