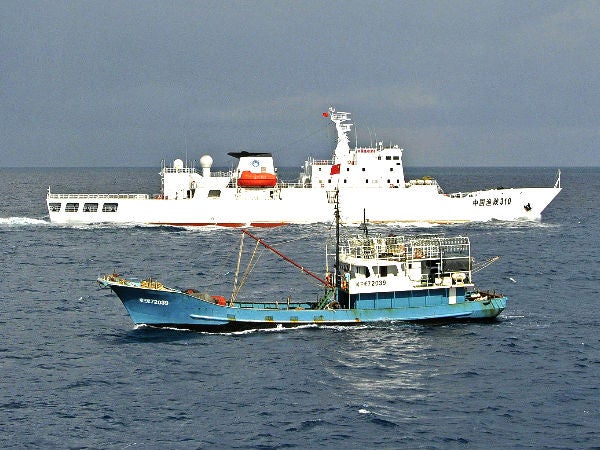 In this filed photo released by China’s Xinhua news agency, a Chinese fishery administration ship (background) guards a Chinese fishing vessel near Yongshu Reef in the Spratly Islands, in the West Philippine Sea, on Sunday, July 15, 2012. (Photo from Xinhua via AP)

MANILA, Philippines — In terms of fishing rights and mineral resources, China is actually the “number one beneficiary” of the 2016 ruling of the Permanent Court of Arbitration that invalidated its sweeping claims in the South China Sea, retired Senior Associate Justice Antonio Carpio pointed out Tuesday.

“Whatever China lost in the South China Sea arbitration, in terms of fishing rights and mineral resources, it has more than recovered in other seas and oceans of the world,” Carpio during his keynote speech at the commemoration of the 50th anniversary of the adoption of the Vienna Convention on the Law of Treaties at the Department of Foreign Affairs in Pasay City.

The retired senior justice said that the arbitral tribunal’s interpretation of a habitable island under Article 121 of United Nations Convention for the Law of the Sea (UNCLOS), pursuant to the Vienna Convention, had “significantly reshaped the fortunes and economies of coastal states all over the world.”

“Surprisingly, the greatest beneficiary of this interpretation is China,” he said.

Carpio said that areas considered as high seas have “expanded” and “greatly “increased” under the arbitral ruling.

“Clearly, many uninhabited islands will no longer be entitled to a 200 nautical mile exclusive economic zones as previously claimed by the coastal states that have sovereignty over them,” he said.

“China has the largest fishing fleet in the world and is clearly the number one beneficiary of the arbitral ruling in this regard,” he added.

Carpio, one of the leading experts and staunch defenders of the country’s sovereign rights in the West Philippine Sea, also urged China to respect the decision of the arbitral tribunal because “they cannot really lose” in terms of fishing and mineral resources.

“They should start with respecting the ruling of the arbitral tribunal because they cannot really lose in terms of fishing and even in terms of mineral resources because in the high seas where islands do not have exclusive economic zones, then beyond the territorial seas, other countries can explore the mineral resources,” he said.

Carpio added that China could seek permission from the International Seabed Authority to explore mineral resources in the seabed “beyond the 12-nautical mile territorial seas of these non-habitable islands anywhere in the world.”

“If you sum it up all, China is really ahead even if it lost to us, but it has gained much more because the high seas have been expanded,” he said.

In 2016, the Permanent Court of Arbitration in The Hague ruled in favor of the Philippines and invalidated China’s expansive claims in the South China Sea, including parts of the West Philippine Sea, under the nine-dash line theory.
/atm