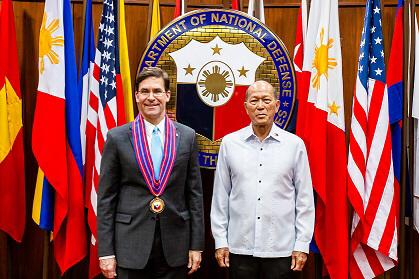 US Defense Secretary Mark Esper (left) and Philippine Defense Secretary Delfin Lorenzana pose for a photo before their joint press briefing at the Department of National Defense office in Quezon City on Tuesday, November 19, 2019. The two met to Philippine-US alliance. Photo from US Embassy

MANILA, Philippines — The United States has expressed willingness to take another look at a decades-old defense pact with the Philippines to clarify Washington’s commitment to defend Manila against “any armed attack” in the volatile South China Sea.

US Defense Secretary Mark Esper, who is in town to reaffirm defense ties between the United States and the Philippines, said he welcomed a proposal by his Philippine counterpart, Defense Secretary Delfin Lorenzana, to revisit the 1951 Mutual Defense Treaty (MDT).

“It’s always good to look at these things from time to time, review and clarify and strengthen it based on changes in the environment and world situation,” Esper told reporters at a joint press conference after his meeting with Lorenzana.

“We’re in a great power competition and it requires us to look at the world differently, build different capabilities and reposition ourselves and to emphasize the importance of this theater. I think for all these reasons it is good to do so,” he added.

In his opening statement, Esper also offered assurance that the entire Pacific region, including the South China Sea, is covered by the MDT.

The Philippines and the United States are bound by the MDT, signed on Aug. 30, 1951, which requires both states to come to each other’s defense against an armed attack.

But the US commitment to defend the Philippines if the attack involved territorial disputes has been put in doubt in recent years amid a rapid military buildup by China in the South China Sea.

A provision of the MDT said it applied only to “metropolitan territory of either of the parties, or on the island territories under its jurisdiction in the Pacific or on armed forces, public vessels or aircraft in the Pacific.”

Metropolitan territory, as defined by previous treaties, did not include the West Philippine Sea and the Spratlys.

Lorenzana first called for a review of the MDT late in 2018 because of “ambiguities” in some of its provisions, including its scope.

“I was actually the one who first put forth the idea of revisiting the MDT because in my opinion it has been made at the height of Korean War. The situation then compared to now is different,” the Philippine defense chief said.

Both sides are now in “low-level discussions” about the possibility of an update of the MDT, Lorenzana said.

A meeting of the Mutual Defense Board-Security Engagement Board will take place this year, he said.

“I don’t know what will be the outcome but it will be a joint cooperative endeavor,” he said.

Esper’s visit to Manila is part of his Asia Pacific swing. This is his second trip to the region since his nomination was confirmed by the US Senate in July.

Xin Qiang, deputy director of the Center for US Studies at Fudan University, said Esper’s trip to Asia “justifies the Pentagon’s renewed military focus on the region with Washington’s Indo-Pacific Strategy out to contain its only proclaimed rival – China.”

“The situation in the Asia-Pacific region is complicated,” said Xin.

“China-US rivalry has a strong spillover effect and many countries have begun to adjust their China and US strategies,” he said in a column in Global Times, a newspaper published by the Chinese Communist Party’s People’s Daily.