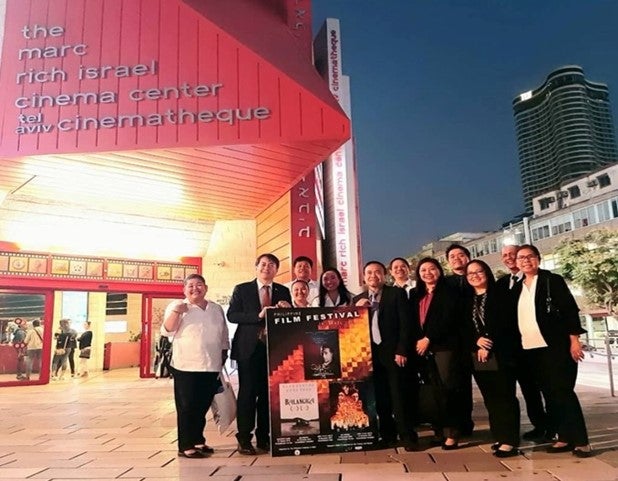 Philippine Ambassador to Israel Neal Imperial (second from left) and other Embassy officers and staff at the premiere screening of “Quezon’s Game” at the Cinematheque Tel Aviv. (Tel Aviv PE photo)

MANILA, Philippines — A Philippine film about late President Manuel L. Quezon’s heroic deed towards Jews during the Nazi regime was premiered in a cinema at Tel Aviv, Israel.

In a statement on Friday, the Department of Foreign Affairs (DFA) said the film titled, “Quezon’s Game” was showcased at Cinematheque in Tel Aviv on Oct. 27.

The film tackled events of Quezon’s kindness for thousands of Jews escaping the Holocaust in Germany and Austria. It also featured the former president’s decision and difficulties in bringing Jewish refugees in the Philippines.

The movie was initially aired in the international film festival circuit in December 2018 where it took home 23 awards, including Best Actor, Best Director and Best Foreign Film.

In a speech during the special screening, Foreign Affairs Undersecretary Ernesto Abella said Philippines’ friendship with the Jewish people continued to bloom even after 80 years since the late president opened the country’s doors to shelter the Jews.

Gilad Cohen, deputy director general for Asia and the Pacific at the Israeli Ministry of Foreign Affairs, complimented the film, saying it was “not [of] the kindness of one man but of the entire Filipino nation.”

Previously, Sen. Panfilo Lacson proposed the screening of the film at Israel to be reminded of Quezon’s gesture for the Jewish population.

Locsin heeded the senator’s call, saying he would coordinate with an Israeli television station to release the film.

“Or else I will write the American-Jewish societies to crack the whip. I have many friends among them,” Locsin said in a tweet.