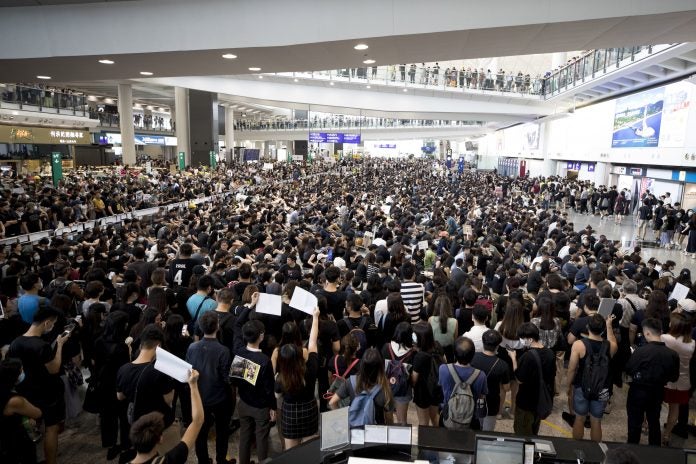 MANILA, Philippines – The “undaunted spirit” of the people of Hong Kong in fighting China’s creeping authority over them should make Filipinos ponder on Beijing claiming parts of the West Philippine Sea.

Sen. Francis “Kiko” Pangilinan said this Thursday as he expressed solidarity with protesters in Hong Kong, who have been treated with brutality by the police.

“Brutality in all forms is attempting to quell the protests of the people of Hong Kong,” Pangilinan said in a statement.

“It has gone beyond the extradition bill, but for greater freedom and survival in the face of China’s creeping authority that puts the administrative region’s fate in question,” he added.

“With mostly only umbrellas as their defense,” he said, “the protesters face bullets, batons, and tear gas of the authorities.”

“Their undaunted spirit — displayed every day as they return to the streets, apologetic to the public for the inconvenience — should make us ponder hard about our own action, or inaction, over China’s try to slowly take possession of our territory in the West Philippine Sea,” he added.

Pangilinan, who is the Liberal party president, urged Filipinos to be vigilant to the threat to Philippine sovereignty.

“That we are a democratic society, not under any foreign authority, should make us all the more responsive and vigilant of the looming threats to our sovereignty,” he said.

“Meanwhile, let’s extend our solidarity to the Hong Kong freedom fighters and learn from them,” he added.  /muf