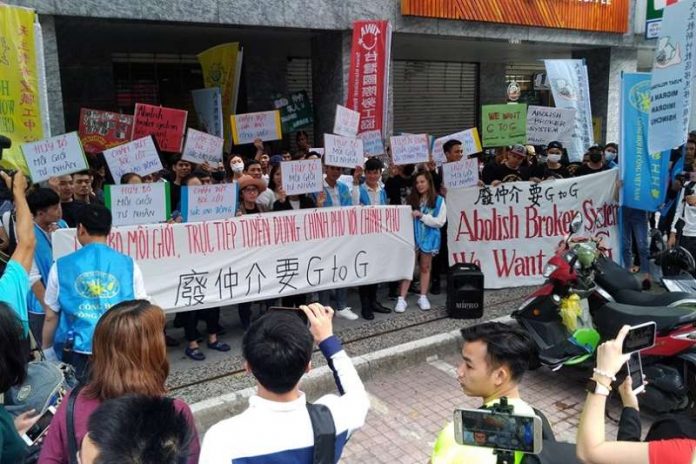 Migrant workers from Indonesia, Vietnam and the Philippines staged separate protests in Taipei on Sunday to demand the abolishment of all placement agencies and the enforcement of a compulsory government-to-government hiring system. (Courtesy of Taiwan International Workers’ Association Facebook)

TAIPEI — Migrant workers from Indonesia, Vietnam and the Philippines staged separate protests in Taipei on Sunday to demand the abolishment of all placement agencies and the enforcement of a compulsory government-to-government hiring system.

The protesting workers, holding streamers and placards reading “Abolish the brokerage system, we want G2G” (government to government) in their own languages, rallied outside the Indonesia Economic and Trade Office (IETO) to Taipei, the Manila Cultural and Economic Office (MECO) and the Vietnam Economic and Cultural Office (VECO) in Taipei.

“The brokers do not help us in times of need, but they continue siphoning off our hard-earned salaries, which are supposed to be sent home to our families,” said a Filipino worker Tommy during the protest.

As a result, migrant workers in Taiwan who want to extend their contract or need to change employers are charged transfer or “job buying” fees of NT$35,000 (US$1,139) to NT$80,000, which is against the law in Taiwan, Hsu told CNA.

In the Philippines, labor laws state that fishermen and caregivers who apply to work abroad need not pay a placement fee, while factory workers only have to pay a fee equivalent to one month of salary, but in most cases the law is ignored, she said.

The direct-hiring scheme will not work unless these governments abolish the manpower broker system, Hsu believed.

“It needs to be initiated by the Taiwan government. We have to respect Taiwan’s law,” Chaves said.

He said there is already a direct hiring program between the Philippines and Taiwan called the Special Hiring Program for Taiwan (SHPT), and it is up to employers to decide whether or not to utilize the program.

Vietnamese worker Thieu Van Loi said his countrymen are charged as much as US$7,000 before they can come and work in Taiwan, even the law does not allow a fee of more than US$4,000 for services and placing them with a Taiwanese employer.

Aside from that, they are required to pay brokers NT$1,500 to NT$1,800 in monthly service fees after arriving in Taiwan in exchange for service that is far from satisfying, he said.

The protesters urged Taiwan’s government to figure out why these problems still exist despite the passage of supposedly labor-friendly measures, such as the amendment of Article 52 of the Employment Service Act in 2016.

The legislation eliminated the requirement that foreign laborers have to leave Taiwan for one day upon expiration of their employment permit before re-entering the country to start on a new contract.

It was supposed to save migrant workers from being charged another placement fee, but many brokers continue to exploit migrant workers by playing with loopholes in the law, according to protesters.

Meanwhile, Hsueh Chien-chung (薛鑑忠), a section chief at the Workforce Development Agency under Taiwan’s Ministry of Labor, said most employers in Taiwan still prefer to hire migrant workers through brokers or placement agencies because of the greater convenience.

Employers prefer to work through brokers and have them handle all the paperwork, screen the workers and handle any problems such as sickness or injury while the workers are in Taiwan.

In the direct hire programs, governments only provide pools of people, but it is up to the companies to select the workers by video interviews or traveling abroad to select workers personally.

Hsueh said Taiwan’s government understands the demands of migrant workers, but the free market also plays a role because employers have the choice of how they want to hire workers.

Issues related to transfer fees are not likely to be discussed in the near future, Hsueh said, but he warned that brokers who demand placement fees from migrant workers will be fined 10 to 20 times the amount they collect and their agency will face closure if proven guilty.

According to a press release issued by the Ministry of Labor in August 2017, placement agencies or brokers in Taiwan are not allowed to collect placement fees from migrant workers. They are only allowed to charge service fees ranging from NT$1,500 to NT$1,800 per month.